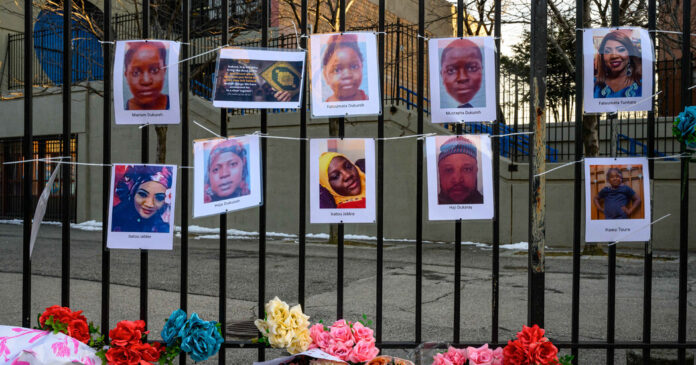 The smoky blaze that took 17 lives in the Bronx a week ago Sunday tore at the heart of a tiny, tight-knit community of Gambian immigrants in New York City. The toll stood at 8 children and 9 adults, the city’s largest loss of life in a single fire in decades. Nearly all the victims were Gambian.

A magnet for Gambians since the late Abdoulie Touray settled there in the 1970s, Twin Parks North West gained the nickname Touray Tower with its skyscraping 19 stories. Generations of families grew up there, streaming in and out of each others’ apartments, sharing meals and lending a hand with child care when parents worked long hours. During Eid celebrations, children would go door-to-door, receiving small gifts of money from each neighbor.

On Sunday, life was routine: The Janneh family was on the sixth floor, getting ready to celebrate a cousin’s Islamic marriage ceremony. On the 19th floor, Mabintou Tunkara was babysitting a toddler and hosting a cousin.

“We’ve always been a community,” said Rokia Touray, 34, one of Abdoulie Touray’s daughters, at a candlelight vigil Tuesday. Ms. Touray grew up in the building and had many relatives there, including the Janneh and Tunkara families.

“I love you all,” she told those gathered. “I really do.”

The fire has destroyed what had become the locus of the Gambian community. Many people do not want to return after they had to flee for their lives through terrifying black smoke. Their apartments remain full of stench, soot, and trauma. The building is missing many familiar faces.

Here are the stories of the people who were lost in the fire.

“Nineteen! Nineteen!” Ousmane Koteh, only 2 years old, yelled out to his relative, Maliyamu Sankano, when they got on the elevator on Sunday morning.

She was taking him to the 19th floor to drop him off at the apartment of his babysitter, Mabintou Tunkara. And she had hesitated when they got on the elevator on the third floor where they lived, Ms. Sankano recalled in an interview.

Impatient, Ousmane loudly reminded Ms. Sankano which elevator button to press. The toddler knew the way to his babysitter’s apartment.

“He’s really a smart baby for his age,” Ms. Sankano said, as if Ousmane were alive. “He puts on his clothes, his sneakers, and when we’re taking him to day care, he knows the direction.”

When the doors opened, Ms. Sankano recalled, “he just ran and started knocking the door.”

He was excited to see Mabintou Tunkara, who had visitors that morning: Her cousin Fatoumata Tunkara was staying over with her 6-year-old son, Omar Jambang.

Later that morning, Ousmane, Omar and Fatoumata Tunkara died, overcome by the smoke from the fire as they tried to flee.

Fatoumata Tunkara left behind several other children, including a 19-year-old son, said Rokia Touray, who is also related to the family.

“His mom is pretty much all that he had,” Ms. Touray said. “We’re trying to tell him we’ve got his back.”

Ousmane had three older siblings, who were in Gambia visiting their father. His mother, Fatou Sankanou, who had to get to her job in patient care at Jacobi Medical Center that Sunday morning, would often work double and overnight shifts, especially during the pandemic, to support them.

Ousmane had a favorite toy: “those firefighter trucks,” Ms. Sankano said, her voice starting to break. “He was always playing with those.”

Sera Janneh, a vivacious 27-year-old, was studying psychology at Lehman College and planned to become a therapist. She had chosen that career path because she believed “we needed more of that in our community, especially in the African community,” her sister Mareama Janneh said.

Sera was active in the Gambian Youth Organization, a volunteer-run nonprofit group run out of a storefront near the apartment building. She helped the group run a food pantry and its Ms. Gambia pageant.

Her best friend, Breanna Elleston, said the two enjoyed going to museums and attending concerts, seeing artists including Tyler the Creator, Playboi Carti and D’Angelo. “Every milestone that I’ve ever had in my life, she’s always been there for me,” Ms. Elleston said.

Rokia Touray used to call Ms. Janneh “the rebel” because she was so outspoken. She said later that there weren’t many recent photos of Ms. Janneh, because she was always behind the camera herself, snapping away with her Nokia.

“She always spoke about mental health and wanting everybody to be the best them,” Ms. Touray said. “I just want everybody to follow that.”

Siblings Seydou and Haouwa were Malian, and they were laid to rest in New Jersey last week after a prayer service at the Timbuktu Islamic Center in Harlem.

A family friend, Mamadou Kane, a former cab driver and leader of the Malian community in the United States, said he had known the father of the two children, Mahamadou Toure, for 20 years. The two men were both members of the mosque where the funeral was held.

The Toure family used to live near the center before moving to the Bronx, Mr. Kane said. He added that he had spoken to Mr. Toure this week and he was taking the loss very hard.

“Even talking is difficult for him,” he said.

Rokia Touray said that whenever Seydou saw her mother, who used to babysit him, carrying garbage bags down the hall, he would insist on taking them the rest of the way to the chute.

“He was such a kind, kind boy. He sees anybody with a bag, he wants to carry it for them,” she said.

Seydou had been a student at Angelo Patri Middle School, next door to the building where he lived. After the fire, classmates taped a white poster bearing a photo of Seydou flanked by two classmates to a brick wall outside the school, and wrote heartfelt messages around it.

The classmates in the photo were Ledwin Torres, 12, and Nazeer Mapp, 14, who said they had known Seydou since third grade and hung out with him in the building often. All three of them had just made the school’s basketball team, with Seydou nabbing point guard.

Nazeer and Ledwin wore laminated photos of Seydou on thin silver chains around their necks after school on Wednesday. Nazeer, whose cousin also escaped from the fire, said he didn’t believe his friend was gone until he saw his picture on the news.

“I just started crying,” he said. “All the memories from middle school came in.”

Four members of the Drammeh family

The Drammeh family had celebrated Muhammed’s 12th birthday on Saturday at an indoor trampoline park in Queens. The following day, Muhammad was lost in the fire, along with his mother Fatoumata, 50 and two sisters, Fatoumala, 21, and Nyumaaisha, 19, who was known as Aisha.

A 16-year-old brother, Yagub, survived, as did another sister, Fatima, 23, who was at work at the time of the fire. Their father, Ishak, was in Ohio on business, and rushed back on an overnight bus.

Days later, he stood outside Masjid-Ur-Rahmah, on Webster Avenue, near the apartment building. He had barely eaten or slept. He had arrived in the United States from Gambia in 1986, he said, and his children were all born here.

Aisha was a nursing student, her sister Fatima said.

Fatoumala was a junior majoring in political science at the University at Buffalo, where she was active with a student group called PULSE, or Powerful United Ladies Striving to Elevate. “She is remembered by those in the UB community as an ambitious and kind student and we mourn the loss of such a promising, passionate young woman,” the university said in a statement.

Rachel McCormick, a teacher at the Bronx Center for Science and Mathematics, said that Fatoumala had been her student in Spanish class. She recalled how she juggled retail jobs to help support her family and saved up for small luxuries for herself, like elaborate braids and weaves.

She went by “Mala” in school, to stand out from the many other Gambians with similar names and as an inside joke, since it means “bad” in Spanish, Ms. McCormick said. Her best school friends were Dominican, Bangladeshi and Ghanaian. To celebrate where they all came from, she organized a multicultural fashion and performance show.

She was also a fierce advocate for herself and her community. When a college counselor dissuaded her from applying to her top choice school, Syracuse University, because it was a long shot and had an application fee, Fatoumala wrote a letter of protest to the school district supervisor, Ms. McCormick said.

“She was opinionated,” Ms. McCormick said. “As adults, that’s rewarded, having strong opinions and knowing how to articulate them. When you’re a black Muslim girl in the Bronx, it’s usually perceived differently — she would get in trouble a lot.”

Isatou Jabbie and Hagi Jawara knew each other from Gambia and were married in New York, where they both worked multiple jobs to provide for their four children, said Ameata Fofana, a niece of Hagi Jawara.

Ms. Jabbie worked as a home health aide and hotel cleaner; in her spare time she braided hair at home for extra cash. Mr. Jawara worked in a fried chicken shop and in construction.

“They worked their whole life and dedicated everything to their children, and for them to die like that, it’s just a tragedy,” Ms. Fofana said. “My aunt, she had big plans for her kids.”

Ms. Jabbie wanted her children to get the best possible education, both Islamic and secular, Ms. Fofana said, so she pushed them to work hard in school, do extracurricular activities, visit the mosque and study the Quran.

The children range in age from 6 to 15, and were visiting their grandmother in Gambia at the time of the fire. It took relatives a few days to break the news to them.

The oldest, Jainabou, is “going to stay strong for the rest of them,” Ms. Fofana said.

Haja Dukuray, 37, moved into the building known as Touray Tower about 15 years ago when she first arrived from Gambia, a relative, Hawa Dukuray, 21, said in an interview.

Haja, her husband Haji, 49, and their three children lived on the 19th floor, and relatives would gather in their apartment during Ramadan nights to cook Gambian-style chicken and jollof rice.

Ms. Dukuray said that Haja had worked as a home health aide. Haji took shifts at a fried chicken shop, intending to save and send money back to their homeland.

The children had all been born in the United States: Mustapha, who was just two weeks shy of his 13th birthday; Mariam, 11, and Fatoumata, who had just turned 5.

“The kids were always fun and joy to be around,” Haja’s uncle said of the children in an interview with PIX11. “They were actually the center of their life.”