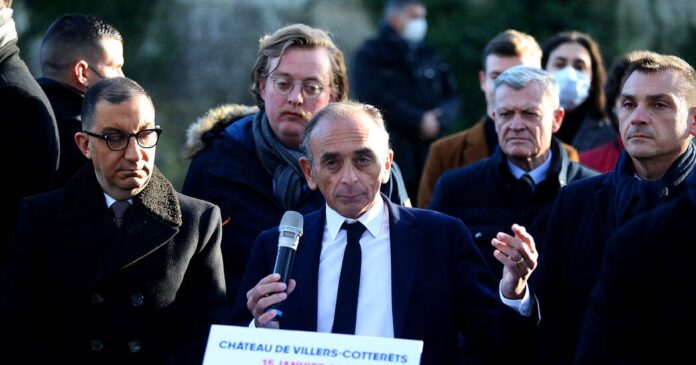 PARIS — Éric Zemmour, the anti-immigrant far-right pundit who is running in France’s presidential elections, was convicted on Monday on charges of inciting racial hatred after saying on television in 2020 that unaccompanied child migrants were “thieves,” “rapists,” and “assassins.”

Mr. Zemmour, who had stood by his comments and said courts should not police political speech, was fined 10,000 euros, or $11,400, by a criminal court in Paris.

The verdict represented the third conviction and fine for Mr. Zemmour, who has a long history of incendiary comments, mostly about immigration, over the past decade, though he has been acquitted on other occasions.

Mr. Zemmour has repeatedly run afoul of French laws that punish defamation or acts provoking hatred or violence on the basis of race, religion and other factors over the past decade, and he still faces several trials on similar charges.

In a statement announcing that he would appeal Thursday’s conviction, Mr. Zemmour said that the court had issued an “ideological and stupid” ruling against a “free spirit.”

“We want the end of this system that tightens the noose around freedom of expression and democratic debate a bit more each day,” he added.

Mr. Zemmour surged in the polls before even announcing his presidential bid in November, and he has scrambled mainstream French politics with his fiery nationalist rhetoric and apocalyptic tone, but his campaign has lost momentum in recent weeks.

With the elections about three months away, Mr. Zemmour has struggled to get the official backing of at least 500 elected representatives — a requirement to appear on the ballot in the presidential election. He now stands at about 13 percent in the polls, in fourth place, while President Emmanuel Macron, who was elected in 2017 and is widely expected to run to stay in office, is polling first.

Mr. Zemmour has explicitly fashioned himself as a French-style Donald J. Trump, with inflammatory comments and attacks against the news media and French elites that have repeatedly drawn outrage and have fueled his rise to prominence.

The case was rooted in comments that Mr. Zemmour made in September 2020. Appearing on CNews — a Fox-style television network that has grown by giving airtime to right-wing pundits to rail on issues like crime, immigration, climate and Covid — Mr. Zemmour was asked about minors who immigrate to France from Africa or the Middle East without parents or guardians and often end up isolated as they face the hardships of city streets or squalid camps.

“They don’t belong here, they are thieves, they are assassins, they are rapists, that’s all they are,” Mr. Zemmour said. “They should be sent back, they shouldn’t even come.”

Politicians and antiracism groups quickly condemned the comments, and prosecutors opened an investigation based on the laws that prohibit defamation and provocation.

Mr. Zemmour’s lawyer had moved to dismiss the charges, arguing during the trial, held in November, that unaccompanied children migrants were not an ethnic or racial group.

Arié Alimi, a lawyer for the French Human Rights League, a plaintiff in the case, told reporters at the courthouse that Mr. Zemmour’s politics were based on “hatred” and the stigmatizing of people “because of their origins, their religion or their race.”

“It’s an important ruling, because he has to understand that we won’t let it stand,” Mr. Alimi said.

The campaign begins. French citizens will go to the polls in April to begin electing a president. Here is a look at the candidates:

A center-right candidate. Valérie Pécresse, the current leader of the Paris region, recently won the nomination of the Republicans by adopting a vocabulary with racial and colonial undertones. She now faces the difficult task of enlarging her support base.

The far-right veteran. Marine Le Pen, who has long used fiery rhetoric to fight her way to power in France, is seeking to sanitize her image. She finished third in 2012 and was defeated by Mr. Macron in the 2017 runoff.

In 2011, a French court convicted Mr. Zemmour on charges of inciting racial hatred for televised comments in which he suggested that a majority of criminals in France were “Black and Arab,” and said that employers “have the right” to deny employment to those ethnic groups.

Mr. Zemmour was found guilty on similar charges for saying on television in 2016 that France had been subjected to an “invasion” of Muslims, whom he accused of supporting jihadist terrorists.

The Paris Appeals Court is expected to review another case against Mr. Zemmour on Thursday involving charges of disputing crimes against humanity. Mr. Zemmour argued on CNews in 2019 that Marshal Philippe Pétain had “saved” French Jews during World War II — comments that were part of Mr. Zemmour’s repeated attempts to rehabilitate France’s collaborationist wartime regime.

A lower court, ruling he had spoken in the heat of the moment, had acquitted him, but prosecutors appealed.

The verdict comes as Mr. Zemmour tries to breathe new life into his effort for the presidency, which initially upended the campaign. In French presidential elections, any number of candidates can run in the first round of voting, but only the top two vote-getters advance to the second round.

If Mr. Zemmour hopes to challenge Mr. Macron in that round, he will have to beat out Marine Le Pen, the other far-right candidate, who is trying to sanitize her image and embody credibility, and Valérie Pécresse, the mainstream conservative candidate who has taken a hard line on issues like crime and immigration.

Mr. Zemmour has siphoned off some of Ms. Le Pen’s voters, but a study by the Kantar Public polling institute released Monday found that his unabashedly and radically nationalist campaign, which features proposals like requiring parents to give their children “traditional” French names, appeared to have “softened” Ms. Le Pen’s image with the broader electorate.

An Exhibition on Cancer Puts Hope for the Future on Display

Kissinger suggests that Ukraine give up territory to Russia, drawing a backlash.

Singing climate protesters disrupt Shell shareholder meeting with “We will stop you!”

As much as 1,500 companies could possibly be affected by a...