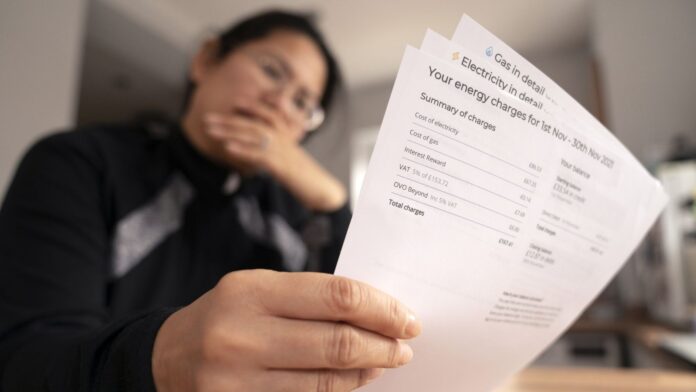 The number of households suffering “fuel stress” because they spend 10% or more of their budget on energy bills looks set to triple to 6.3 million, according to a think-tank.

Bills for customers on standard tariffs are in line to rise sharply from April when a new price cap – expected to be increased by 50%, taking a typical annual bill to £2,000 – comes into force.

A report for the Resolution Foundation predicts that this will see the proportion of households in England in fuel stress rise from 9% to 27%.

Why are your bills going up?

The new price cap level, to be announced in February, is expected to see a big hike because of the steep rise in wholesale energy prices over recent months.

It is the major factor behind a cost of living squeeze which is predicted to see consumer price inflation surge to 6% in the spring, a level not seen since the early 1990s.

The Resolution Foundation said levels of fuel stress were set to be highest regionally in the North East and West Midlands, at 33% and 32%.

The think-tank predicts that 38% of pensioner households and 35% of those in local authority housing would be affected by fuel stress while the level among those living in the worst insulated homes would hit 69%.

The think-tank added that the scale of energy bill increases will mean that the issue will no longer be confined to the poorest households but spread more widely among those on low and middle incomes.

It said the government could prevent the problem from “turning into a cost of living catastrophe” through a £7.3bn programme to reduce annual bills by up to £545.

That would include hiking and widening access to the targeted Warm Home Discount benefit for those most at risk of struggling.

It would also include measures to bring down bills for all, including deferring some of the costs of energy supplier failures – which would otherwise be added to bills – to later years and shifting the burden of environmental levies – currently also part of energy tariffs – to general taxation.

The think-tank also cited the potential for increasing benefits by more than the currently planned 3.1% in April – a measure last week mooted by the Institute for Fiscal Studies.

West Midlands Ambulance Service at risk of collapse, according to nursing director

Anthony Bryan: ‘My Windrush drama received a BAFTA however I nonetheless...

Majority of Euro 2020 racist abuse got here from UK accounts...