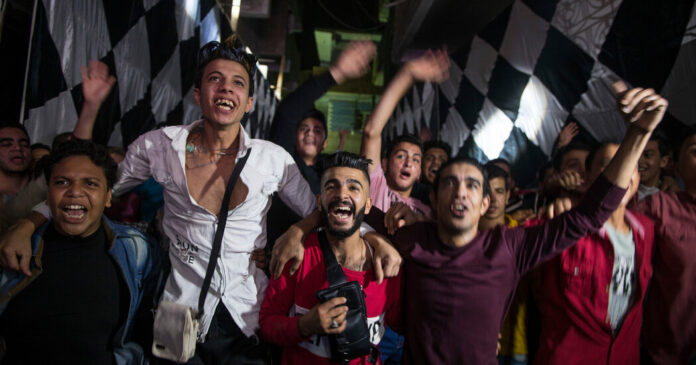 CAIRO — The song starts out like standard fare for Egyptian pop music: A secret infatuation between two young neighbors who, unable to marry, sneak flirtatious glances at each other and commit their hearts in a bittersweet dance of longing and waiting.

But then the lyrics take a radical turn.

“If you leave me,” blasts the singer, Hassan Shakosh, “I’ll be lost and gone, drinking alcohol and smoking hash.”

The song, “The Neighbors’ Daughter,” has become a giant hit, garnering more than a half- billion views of its video on YouTube alone and catapulting Mr. Shakosh to stardom. But the explicit reference to drugs and booze, culturally prohibited substances in Egypt, has made the song, released in 2019, a lightning rod in a culture war over what is an acceptable face and subject matter for popular music and who gets to decide.

The battle, which pits Egypt’s cultural establishment against a renegade musical genre embraced by millions of young Egyptians, has heated up recently after the organization that licenses musicians barred at least 19 young artists from singing and performing in Egypt.

The organization, the Egyptian Musicians’ Syndicate, accused Mr. Shakosh and other singers of the genre, known as mahraganat, of normalizing, and thus encouraging, decadent behavior, of misrepresenting Egypt and of spoiling public taste.

“They are creating a chaotic movement in the country,” said Tarek Mortada, the spokesman for the syndicate, a professional union that issues permits for artists to perform onstage and that while technically not an arm of the state, is governed by state law and its budget is supervised by the state. “What we’re confronting right now is the face of depravity and regression.”

The barred singers have been iced out of clubs, concerts and weddings. Some have continued to perform abroad or at private parties, but they have had to say no to advertising deals and other income opportunities. The syndicate’s stance has also cast a pall over Egypt’s cultural scene, sending a strong message that artists are not free agents and must still toe restrictive lines set by civil and state institutions. The musicians see the syndicate as an outmoded entity desperately clinging to a strictly curated vision and image of Egyptian culture that is smashing against an inevitable wave of youth-driven change.

“They can’t get themselves to be convinced that we’re here to stay,” said Ibrahim Soliman, 33, Mr. Shakosh’s manager and childhood friend. “How can you say someone like Shakosh misrepresents Egypt when his songs are being heard and shared by the entire country?”

Fans were incensed. One meme depicted the leader of the syndicate, a pop singer of love classics from the 1970s, ordering people to stop singing in the bathroom.

The battle mirrors cultural conflicts across the region where autocratic governments in socially conservative countries have tried to censor any expression that challenges traditional mores. For example, Iran has arrested teenage girls who posted videos of themselves dancing, which is a crime there. And in 2020, Northwestern University in Qatar called off a concert by a Lebanese indie rock band whose lead singer is openly gay.

But online streaming and social media platforms have poked giant holes in that effort, allowing artists to bypass state-sanctioned media, like television and record companies, and reach a generation of new fans hungry for what they see as more authentic and relevant content.

Iran’s draconian restrictions on unacceptable music have produced a flourishing underground rock and hip-hop scene. The question facing Egypt is who now has the power to regulate matters of taste — the 12 men and one woman who run the syndicate, or the millions of fans who have been streaming and downloading mahraganat.

Mahraganat first rose out of the dense, rowdy working-class neighborhoods of Cairo more than a decade ago and is still generally made in low-tech home studios, often with no more equipment than a cheap microphone and pirated software.

The raw, straight-talking genre — with blunt lyrics about love, sex, power and poverty — mirrors the experience and culture of a broad section of the disenfranchised youth who live in those districts set to a danceable, throbbing beat.

But its catchy rhymes and electronic rhythms quickly went mainstream and now echo from the glamorous wedding ballrooms of Egypt’s French-speaking elite to exclusive nightclubs in Mediterranean resorts to concert halls in oil-rich Qatar and Saudi Arabia.

“Mahraganat is a true representation of this moment in time, of globalization and information technology, and of social media in directing our tastes,” said Sayed Mahmoud, a culture writer and former editor of a weekly newspaper called “Alkahera” issued by the Ministry of Culture. “If you remove the reference to drugs and alcohol, does it mean they don’t exist? The songs represent real life and real culture.”

They are certainly more direct, avoiding the sanitized euphemisms and poetic hints of sexuality that characterize traditional lyrics.

“We use the words that are close to our tongue, without embellishing or beautifying, and it reaches people,” said Islam Ramadan, who goes by the name DJ Saso, the 27-year-old producer of Mr. Shakosh’s blockbuster hit.

Many lawyers and experts say the syndicate has no legal right to ban artists, insisting that Egypt’s Constitution explicitly protects creative liberty. But these arguments seem academic in the authoritarian state of President Abdel Fattah el-Sisi, which has stifled freedom of speech, tightened control on the media and passed laws to help monitor and criminalize so-called immoral behavior on the internet.

The syndicate’s executive members have adamantly defended their move, arguing that a key part of their job is to safeguard the profession against inferior work that they say is made by uncultured impostors who tarnish the image of the country.

And government authorities have reinforced the message.

In 2017, a special division of the police that targets moral crimes arrested the makers of a mahraganat song, and promised to continue searching for work that “presents offensive content for the Egyptian viewer or contains sexual insinuations.”

In 2020, after a video circulated showing dozens of students at an all-girls high school singing along to “The Neighbors’ Daughter,” the Ministry of Education warned schools against the “noticeable” spread of songs that incite “bad behavior.”

A short time later, the minister of youth and sports vowed to “combat depravity” by banning mahraganat music from being played in athletic arenas and sports facilities.

The head of the syndicate, Hany Shaker, defended the ban on a late-night television show, saying, “We can’t be in the era of Sisi and allow this to be the leading art.”

So far, the syndicate claims to be winning the fight.

“We have in fact stopped them because they can’t get onstage in Egypt,” said Mr. Mortada, the organization’s spokesman, adding that it went so far as to ask YouTube to remove videos of the banned singers. It has not received a response from YouTube, he said.

But who will win in the long run remains to be seen.

The syndicate’s very structure smacks of a bygone era. To be admitted and allowed to sing and perform onstage, an artist must pass a test that includes a classical singing audition. The test is anathema to a genre that relies on autotune and prioritizes rhythm and flow over melody.

While the syndicate’s efforts may be keeping mahraganat out of clubs and concert halls, the music has never stopped.

Mr. Shakosh’s popularity continues to rise. He has more than six million followers on Facebook and over four million on Instagram and TikTok, and his music videos have exceeded two billion views on YouTube.

He is one of the Arab world’s leading performers. Since he was barred, he has performed in Saudi Arabia, Qatar and Iraq, and “The Neighbors’ Daughter” has become one of the biggest Arabic hits to date.

“It’s not the same old love songs,” said Yasmine el-Assal, a 41-year-old bank executive, after attending one of Mr. Shakosh’s concerts before the ban. “His stage presence, the music, the vibe, it’s fresh and it’s all about having fun.”

Mr. Shakosh would not agree to be interviewed, preferring to keep a low profile, his manager said, rather than to appear to publicly challenge the authorities. The ban has been harder on other artists, many of whom do not have the wherewithal or the international profile to tour abroad.

They have mostly kept quiet, refusing to make statements that they fear could ruffle more feathers.

Despite the squeeze, however, many are confident that their music falls beyond the grip of any single authority or government.

Kareem Gaber, a 23-year-old experimental music producer known by the stage name El Waili, is still burning tracks, sitting in his bedroom with a twin mattress on the floor, bare walls and his instrument, a personal computer with $100 MIDI keyboard.

“Mahraganat taught us that you can do something new,” he said, “and it will be heard.”

Israel’s Political Crisis Is Resolved, but Governing Remains a Strain

In Iran, a New Wave of Repression Hits Acclaimed Filmmakers