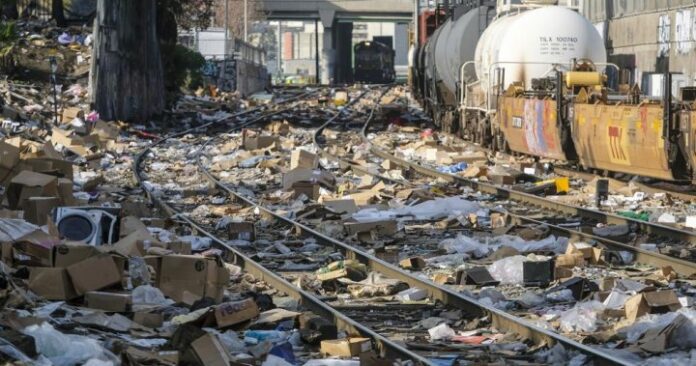 Have you ever expected a package delivery, only to find that it was seemingly lost in the ether? It never makes it onto your porch, and the status stays stuck on “out for delivery”?

New video, captured in a Los Angeles train yard, shows what happens to at least some of the packages that never reach their final destination.

John Schreiber, a freelance photojournalist working for CBS, captured incredible footage of the rampant looting and theft that has been plaguing cargo trains in L.A.

The video shows debris as far as the eye can see – thousands of broken boxes, discarded merchandise and unopened Amazon Prime packages.

The area looks almost like a landfill, and Schreiber and his colleagues witnessed a few brazen thefts while the cameras were rolling.

Keep hearing of train burglaries in LA on the scanner so went to #LincolnHeights to see it all. And… there’s looted packages as far as the eye can see. Amazon packages, @UPS boxes, unused Covid tests, fishing lures, epi pens. Cargo containers left busted open on trains. @CBSLA pic.twitter.com/JvNF4UVy2K

Schreiber said he was prompted to head to the Lincoln Heights train yard after hearing multiple train burglaries come across the L.A. police scanner.

He spoke with Union Pacific officials while shooting his videos, who told him that the area was cleaned up about 30 days ago, so what he was shooting had only happened within the last month.

As you can see, trains frequently slow or stop in this area as they get worked into the @UnionPacific Intermodal facility near Downtown LA. The thieves use this opportunity to break open containers and take what’s inside. I’d say every 4th or 5th rail car had opened containers. pic.twitter.com/PHpujyB84M

The trains stop in the area for hours, and sometimes overnight, to unload their cargo. However, sources told CBSLA that the locks used on the containers are easy to cut through.

In a statement to CBSLA, Union Pacific said they are “very concerned about the increased cargo thefts” and that they have “increased the number of…special agents on patrol.”

Responsibility for policing the railroad right of way falls on Union Pacific Police… not local agencies like LAPD. We did see Union Pacific police chasing two people today off the tracks and keeping an eye on things. pic.twitter.com/M5aQSrkGZW