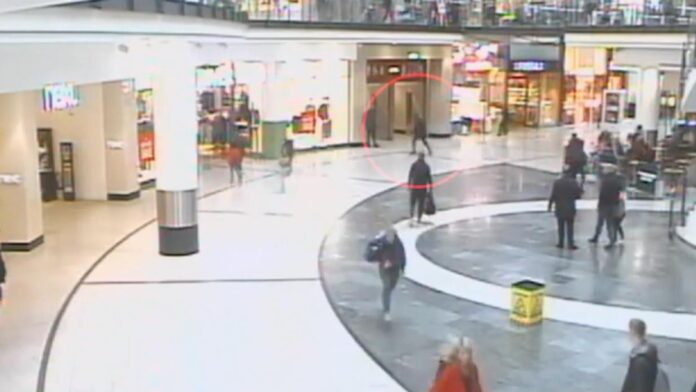 Manchester Crown Court has heard how Raphael Chevelleau, 43, bought a kitchen knife from Blackley Pound Store near his flat in Rochdale Road, Blackley, on the morning of 11 October 2019, before he then caught a bus into the city.

He entered the Arndale at about 11.05am and went into a baby-change room, where he unwrapped the knife packaging and went on to carry out his attack.

Andrew Ford, prosecuting, said: “With no warning he broke into a run, wielding the knife, and randomly stabbed five members of the public.

“He caused widespread fear and panic among the general public visiting the Arndale Centre that day and a sense of pandemonium as people fled.”

His first victim was a 61-year-old engineer, whom Chevelleau stabbed in the back, before moving on to a 35-year-old woman who was walking with her husband in the centre.

She remembered Chevelleau had a “wide cheesy smile” as he attacked her.

His next target was a 45-year-old woman pushing her baby in a pram and then a 21-year-old woman from Ireland, who was visiting the city with friends for an 18th birthday celebration.

In a statement, she said: “The man was looking right through me and looking as if he really wanted to hurt me.”

‘I thought I was finished’

His final victim was a 52-year-old female department store worker, who recalled after he stabbed her: “I couldn’t move any more, if he comes back he will kill me. I thought I was finished.”

Chevelleau then dumped the knife in a waste bin in a nearby street following the stabbing spree, which lasted one minute and 27 seconds.

After he was arrested at the scene, he later told officers in custody: “I was going to stab my ex-girlfriend but I couldn’t be bothered to travel there so I took it out on someone in town.

“I’m guilty as sin. I should have done a bank instead.”

Chevelleau pleaded guilty at an earlier hearing to three counts of wounding with intent and two counts of attempted wounding.

The defendant appeared at the hearing by videolink from Ashworth high security hospital and is expected to be sentenced on Monday.

Paul Shakespeare: Man jailed for 1990 rape of teenager who was walking her dog