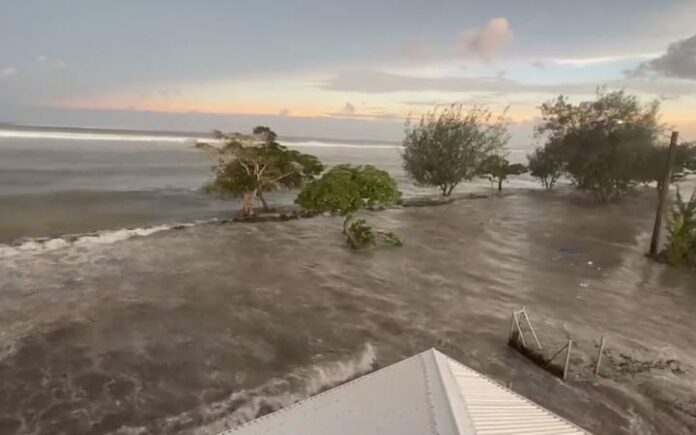 Parts of New Zealand are also under tsunami warning after a violent eruption of the Hunga-Tonga-Hunga-Ha’apai underwater volcano in Tonga this afternoon.

A tsunami has hit the Tonga’s largest island Tongatapu, with tidal waves crossing the shoreline in the capital Nuku’alofa and flooding coastal roads and properties.

There is panic and people are worried and uncertain what to do, RNZ Pacific reporters say.

The advisory for the north and east coast of the North Island and the Chatham Islands came around 8.45pm from NEMA (the National Emergency Management Agency).

It said people in those areas might experience strong and unusual currents and unpredictable surges at the shore.

People are being urged to stay away from beaches and shore areas until 4am tomorrow.

There is no need to evacuate other areas unless directly advised by local civil defence authorities.

Coastal inundation (flooding of land areas near the shore) is not expected as a result of this event.

A tsunami warning for all of Tonga was issued just after 5.30pm by the Tonga Meteorological Services.

Waves have hit the main island, Tongatapu, including its capital, Nuku’alofa.

It’s dark now in Nuku’alofa and ash is falling and people can see lightning in the ash clouds.

Phone connections are down and it’s been difficult for people to get through.

There is also a tsunami advisory in place for Samoa.

Australian takeover of Coromandel mine a ‘Trojan horse’ – conservation watchdog