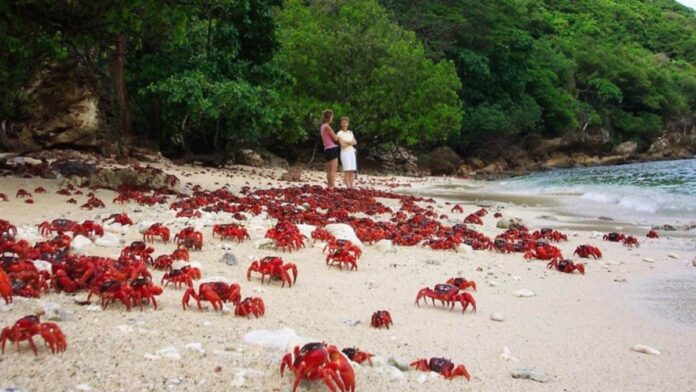 Millions of baby red crabs have scurried ashore on Christmas Island, with locals using leaf blowers to save the heaving mass from the traffic.

The bumper breeding season is more good news for the island’s most famous residents and will further swell a population that has exploded in recent years.

Of late, scientist Tanya Detto has spent about five hours a day with a blower strapped to her back, airbrushing baby crabs off the road as people head to work or the shops.

Some locals even break out their own blowers and give her a hand with the hot, exhausting task.

It’s a bit like trying to part the Red Sea, Dr Detto says.

“They are very light and they just fly for a bit. They aren’t injured and when they land they just keep walking.

“But they move so fast that by the time you’ve blown one little section, the ones coming along behind have already filled the gap, so you have to stay just in front of the cars.”

In addition to her traffic management duties, Dr Detto is in charge of trying to work out how many red crabs now call Christmas Island home.

It is no easy task given millions are added to the mix in good years – and there have been plenty of those recently.

She estimates the population has exploded from about 40 to 50 million in 2015 to about 190 million, based on surveys she carried out late last year.

“Basically since 2013/14 we started having lots of really big returns of babies, which we didn’t get in the 20 years before,” she said.

“I don’t know why … but it’s got to have something to do with the swell and currents and sea conditions around the island when the babies are out there.”

The Christmas Island red crab is a land crab but needs the sea to breed.

Towards the end of each year, adult crabs leave their forest homes in the interior of the island and march towards the coast.

When the tide is right, females plunge into the shallows and vigorously “shake their booties”, releasing sacks of eggs.

They hatch almost immediately and the larvae vanish into the sea only to return three to four weeks later as megalops, the final stage of their lifecycle when they can still breathe underwater.

After a week or so hanging out in the shallows they fully transform into crabs and make a dash for the forest turning every patch of ground, or road, into a rippling, living carpet as they go.

The young crabs remain in the forest for four to five years when they will have matured enough to join the annual migration to the coast.

Dr Detto says the red crab, which is found only on Christmas Island and, to a much lesser extent, the nearby Cocos Islands, is also doing well thanks to efforts to control invasive yellow crazy ants.

Crazy ants were first detected on the island in the 1920s but it wasn’t until the first super colonies formed in the late 1980s that they became a problem.

The ants have killed tens of millions of red crabs over the years by spraying them with potent formic acid.

But there are fewer of the invaders now after scientists deployed a micro-wasp to prey on an insect that has historically provided the ants with an abundant food source.

Being ‘monogamish’: Why I opened up my marriage