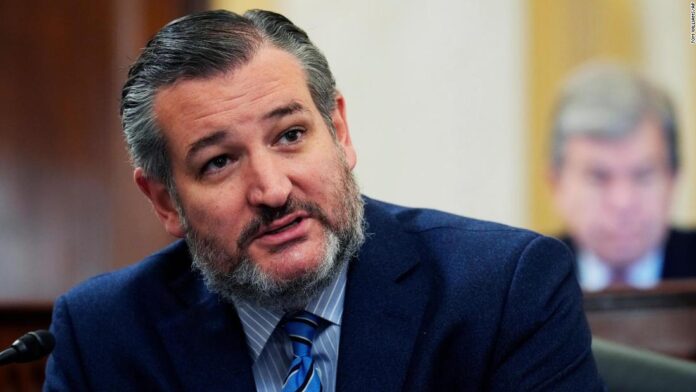 Needing 60 votes to pass, it failed 55-44. A handful of Democrats running for reelection voted with Republicans, including Sens. Catherine Cortez Masto of Nevada, Maggie Hassan of New Hampshire, Mark Kelly of Arizona and Raphael Warnock of Georgia. Democratic Sens. Tammy Baldwin of Wisconsin and Jacky Rosen of Nevada also crossed the aisle.

Sen. Rand Paul of Kentucky was the lone Republican to oppose the bill.

The Biden administration had argued that the sanctions would undercut US efforts to deter the threat from Russia. A number of Democrats had been weighing whether to break from the White House and back the Cruz measure, wary about appearing soft on Russia amid rising tensions with Ukraine and eager to send a strong message to Russian President Vladimir Putin, including over the pipeline that runs from Russia to Germany.

The vote came after Democrats reached a compromise last month with Cruz, who agreed to lift his holds on multiple Biden administration State Department nominees if he got a vote on his sanctions measure.

Ahead of the vote, Senate Foreign Relations Chair Bob Menendez took to the floor to urge members to vote no, and lobbied for his own bill that would impose sanctions only if Putin decides to invade Ukraine.

“This legislation makes it absolutely clear that the U.S. Senate will not stand idly by as the Kremlin threatens a re-invasion of Ukraine,” the New Jersey Democrat said in a statement Wednesday.

“We are coming together to send a clear message—Putin need not collapse his entire economy nor does he need to sacrifice the lives of his own people in a futile attempt to rewrite the map of Europe. Ultimately the most effective sanction on Russia is a strong and unified Ukraine, and I look forward to working with my Democratic and Republican colleagues so that we can provide the people of Ukraine the type of support they need to confront the bully in Moscow.”

Menendez had been leading the charge against the Cruz bill all week. “Putin wants to see Nord Stream 2. If somehow it’s killed before any potential invasion, he has one less reason not to invade Ukraine,” Menendez said Tuesday. “But if we have the mother of all sanctions levied against him personally and Russia, which is what my legislation will do, then ultimately that is a real deterrent, and a calculation for Putin to have to take into consideration as it relates to invading Ukraine.”

Cruz believes that the newly constructed 750-mile pipeline, which is not yet operating, would empower Putin and allow him to hold dangerous leverage over Europe by controlling the flow of much-needed natural gas there. The Ukrainian government had come out in support of his plan.

Cruz argued that if sanctions aren’t enforced, it would be existential for Ukraine. “And days or weeks or months from now — If we turn on the television set and see Russian tanks in the streets of Kiev, the reason will be that the United States Senate heard the pleas of our Ukrainian allies and we turned a deaf ear to them. I pray that we don’t do so. The eyes of history are upon us and this body, Republicans and Democrats, to rise to the occasion.”

The Biden administration on Wednesday finalized sanctions options in the event that Russia invades Ukraine, according to senior administration officials, as talks were ongoing in Europe between US, Russian and NATO officials aimed at averting a war.

The Biden administration has sanctions targets and implementation measures “ready to go to be issued when those tanks cross the border,” a senior administration official said. “The final package will depend upon exactly what scenario we are facing … but we are no longer at the point where we have just a memo that lays out options. We have concrete actions that we are ready to hit the return key on.”

Another senior administration official said, “We are ready for every scenario and the options are very well developed.”

As CNN previously reported, the White House over the last several weeks had been analyzing the impacts that various sanctions options would have not just on Russia but also on the European and American economies. The administration officials said on Wednesday that the US and allies had determined that while severe economic sanctions will likely have global economic ramifications, any spillover can be managed.

“The European financial system and its overall economy are in far better health than in 2014, particularly in the banking sector,” one of the officials said. The official also emphasized that this is not a matter of weighing the costs of imposing sanctions against the scenario of a “peaceful status quo” — rather, the options have been weighed against the possibility that Russia takes aggressive actions that cause significant destabilization in the heart of Europe.

The US is also aware of the risk that Putin tries to retaliate against any economic sanctions by weaponizing the export of Russian gas to Europe, which relies heavily on Russian energy supplies. One of the officials said that if Putin went down that path, it would “stiffen the resolve of Europe to find supplies elsewhere.”

CNN’s Manu Raju and Natasha Bertrand contributed to this report.

Neighborhood members collect for vigil of sweet sixteen preventing for her...