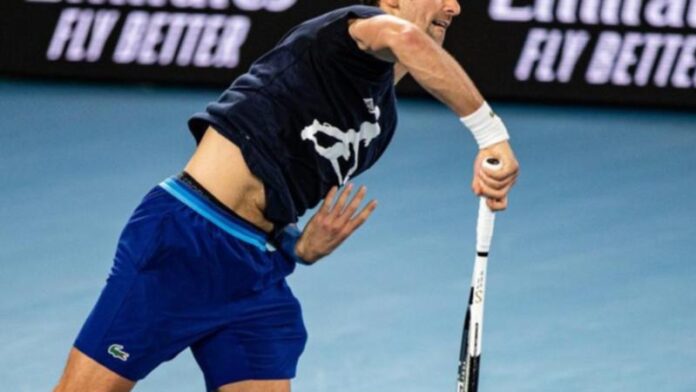 Tennis star Novak Djokovic will be detained by immigration officials in Melbourne on Saturday as he fights a federal government decision to cancel his visa for a second time.

Immigration Minister Alex Hawke used his discretionary powers late on Friday afternoon to cancel the world No.1’s visa, after considering evidence from Djokovic’s lawyers, along with advice from federal agencies.

“I exercised my power under section 133C(3) of the Migration Act to cancel the visa held by Mr Novak Djokovic on health and good order grounds, on the basis that it was held in the public interest to do so,” Mr Hawke said in a statement.

In an urgent directions hearing in the Federal Circuit Court on Friday night, Djokovic’s lawyers sought an injunction against his deportation until a further hearing on Sunday.

As part of a court order made by Judge Anthony Kelly, Djokovic will be required to attend a meeting with immigration officials on Saturday, where he will be detained.

Djokovic’s team are considering a number of grounds of challenge to the visa cancellation in a formal application to be filed on Saturday.

Despite the visa cancellation the tennis star was spared detention on Friday night. He will now likely be detained at the immigration hotel he was held at last week.

The unvaccinated Djokovic arrived in the country last Thursday for the Australian Open, when he was detained by border officials and his visa cancelled.

Australia’s pandemic response has included an insistence a visa holder must be double-vaccinated or show acceptable proof they cannot be vaccinated to enter quarantine-free.

While that decision was later overturned by a federal court on fairness grounds, Djokovic was faced with uncertainty over his future in the grand slam with the possibility of a second visa cancellation from the immigration minister.

The Australian Open begins on Monday, with the world No.1 looking to secure his 10th title at the event.

Djokovic was named in the draw on Thursday, where he is slated to face Serbian compatriot Miomir Kecmanovic.

“Australians have made many sacrifices during this pandemic, and they rightly expect the result of those sacrifices to be protected,” he said in a statement.

“That is what the (immigration) minister is doing in taking this action today.

“Our strong border protection policies have kept Australians safe, prior to COVID and now during the pandemic.”

Officials looked into potential discrepancies on Djokovic’s declaration form, which stated he did not travel out of the country in the two weeks before his flight to Australia.

Djokovic was filmed playing tennis in Serbia on Christmas Day and was later seen training in Spain on December 31, both in the two-week window.

However, Djokovic has denied he was trying to mislead the government on the form, stating an agent had made an “administrative mistake” while filling out the form.

In a statement posted to social media, the Serbian player also admitted to attending a media interview in Belgrade when he knew he had COVID-19.