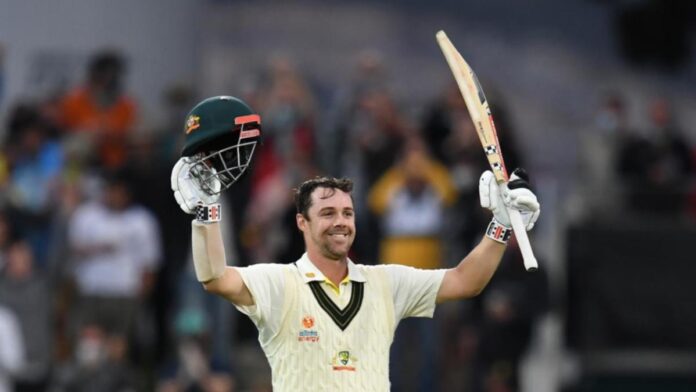 Travis Head has reached a new high in his coming-of-age summer, dismantling England’s attack to score a pressure-laden hundred in Hobart.

Head was axed at the halfway point of Australia’s 2020-21 series against India, extending a stop-start Test career in which he looked equal parts majestic and mediocre.

Even at the start of this Ashes series, Head needed to edge Usman Khawaja to claim the final spot in Australia’s XI.

The left-hander has since made the No.5 spot his own, returning with a bang at Bellerive after sitting out the drawn SCG Test because he contracted COVID-19.

Head reached three figures late in the second session of the day-night Test, bringing up the milestone in three hours.

The 28-year-old was dismissed off the very next ball he faced after celebrating the hundred.

But the damage was done, with the devastating knock arguably more impressive than Head’s series-opening 152 at the Gabba.

Mike Hussey, who knows the unique challenges associated with batting in the middle order, was stunned with Head’s “incredible” confident counter-punch.

“I’ve been so impressed. You think back to the first Test match at the Gabba,” Hussey said on Fox Cricket.

“He came in after all the hard work that David Warner and Marnus Labuschagne did.

“He was able to come out and play with such freedom.

“This has been a completely different situation. He’s still come out and played with such a positive frame of mind.”

Head entered the fray at 3-12, with his side under the pump after losing the toss.

South Australia’s skipper proceeded to flip the game on its head, seizing control through game-changing partnerships with Marnus Labuschagne and Cameron Green.

Head’s capacity to score quickly is partly what earned him the backing of selectors and coach Justin Langer.

Even Head’s most ardent supporters would have been in awe of Friday’s flurry of boundaries.

Head was having none of it, bringing up a half-century in 53 balls as he overtook Labuschagne to become the leading run-scorer of the series.

The 28-year-old continued to play his shots after the dinner break, making a mockery of an attack that looked poised to blast the hosts out for an incredibly low total.

FASTEST TO 50 THIS SUMMER