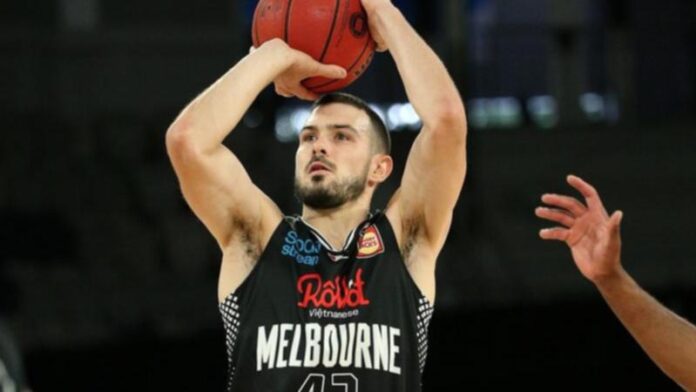 Melbourne United have claimed a fifth consecutive victory in the NBL, downing the New Zealand Breakers 89-78 behind a milestone night from sharpshooter Chris Goulding.

Playing in an empty MyState Bank Arena in Hobart on Friday night, United (7-4) drowned out three quarters of noise by the Breakers (1-7) to pull away in the final 10 minutes behind Goulding, who finished with 25 points.

The Boomers star notched a milestone 5000 career points in the NBL before going to another gear in the fourth quarter to carry his side to victory.

Early on in the contest it was all Jo Lual-Acuil who’s interior presence and energy on the glass got the better of Breakers big man Yannick Wetzell, with the United centre notching 22 points and 12 rebounds of his own – his first ever 20 and 10 NBL game.

Melbourne coach Dean Vickerman said the duo of Goulding (50 per cent from beyond the arc) and Lual-Acuil were outstanding on a night where the Breakers’ defensive pressure kept the contest close.

“He’s (Goulding) a dual championship winner, he’s our captain, there’s not many more accolades you can put on him,” he said.

“He likes to see perfection and if he doesn’t, he’s willing to hold people accountable to the way that we go about things, me included.

“I thought Jo’s attack on the rim, and seal inside the paint were so effective tonight and then again being an anchor for us at the defensive end and challenging things at the rim.”

United were given numerous second-chance opportunities throughout with their domination on the boards, doubling their opposition 50 to 25, with 14 of those on the offensive end.

Jeremiah Martin led the way for the Breakers off the bench with 20 points off 8/13 shooting as their strategy to force their opposition into the paint paid dividends for three quarters.

Returning point guard Peyton Siva said their grit was something to be proud of but they need to win these tight contests.

“Overall, I thought we came out played and hard at the beginning – the mistake that we made was giving up too many offensive rebounds,” he told reporters.

“Each game we have to draw some positives: today we did a good job of sharing the ball, we kept the turnovers down but at the end we still lost.

“We’ve got the short turn around, Sydney coming up. So we have got to focus in on that.”