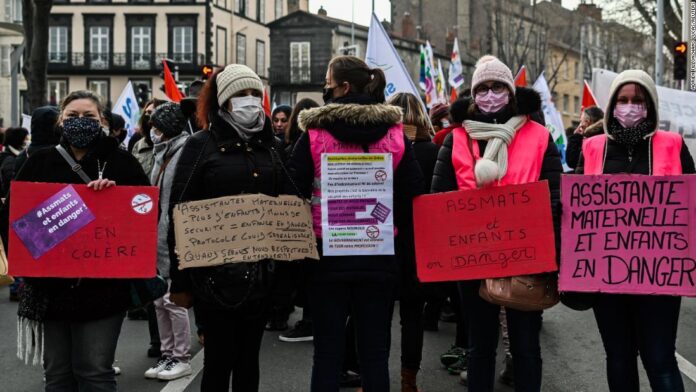 The French Ministry of Education told CNN that about 31% of all schoolteachers were on strike Thursday, with 38% in primary schools taking action and nearly 24% in secondary schools.

The figures were significantly lower than those given by a French teachers’ union earlier in the day.

“This is the ministry downplaying once again the magnitude of the strike,” a spokesperson for the Combined National Union of Primary School Teachers, Guislene David, said when asked about the discrepancy.

In Paris, 58% of teachers were on strike​, and nearly 200 schools were closed​ Thursday, according to the mayor’s office.

A protest organized by teachers’ unions began around lunchtime in Paris. However, small groups of teachers were already seen taking to the streets by the capital’s Arc de Triomphe, as well as in other cities, Thursday morning.

A French trade unionist speaking on radio station France Info​ said the strike was “not against the virus,” but rather “a strike against the lack of consultation.”

French Prime Minister Jean Castex and Education Minister Jean-Michel Blanquer will meet Thursday afternoon with representatives of all the teachers on strike, a spokesperson for the joint teachers’ union told CNN.

An education ministry spokesperson confirmed to CNN that Castex and Blanquer would be attending the meeting.

According to CNN’s French affiliate BFMTV, Health Minister Olivier Veran, who announced Thursday he had tested positive for Covid-19 and is isolating, will join them by videoconference.

On Tuesday, France recorded its highest number of Covid-19 daily infections since the pandemic began, with a total of 368,149 new cases, according to data released by the French government. A further 361,719 new cases were recorded Wednesday.

Union leaders say their members are frustrated by constantly changing guidelines on how to handle the pandemic.

On January 2, the eve of the new school semester, Blanquer outlined new Covid-19 rules for schools in an interview with Le Parisien newspaper.

These rules stated that if a positive Covid-19 case was detected in a class, all other students would have to take three Covid-19 tests in four days to stay in school. They must first take a PCR or antigen test, with two self-administered tests to be taken at home on day 2 and day 4.

Laurent Berger, head of the French Democratic Confederation of Labor, whose union joined the strike Thursday, said the schools learned of the new protocol only one day before the new school year started, adding that the rules were changing “all the time.”

Teachers and personnel are “fed-up,” according to Berger, who accused Blanquer of “mishandling” the pandemic in schools.

The rules changed again on Monday when Castex announced during an interview with French TV station France 2 that students would now only be required to take three self-administered Covid-19 tests at home.

If the first test was negative, children could return to school the next day, before taking the second test at home that evening, a French health ministry spokesperson confirmed to CNN on Thursday.

Another change announced by Castex means that as of Tuesday, parents of children who are close contacts of a positive case no longer need to pick up their children straight away and may wait until the end of the school day.

“We are informed by the media and not the minister,” said David, of the Combined National Union of Primary School Teachers.

French teachers and schools are “fed up,” said David, who added that the fact the authorities “keep changing the rules” is “causing constant chaos in schools.”

She added that the testing protocol was “allowing the virus to easily enter the schools and was not protecting the teachers.”

CNN’s Niamh Kennedy and Arnaud Siad contributed to this report.

A Fighter for Press Freedom Is Expanding Her Battle