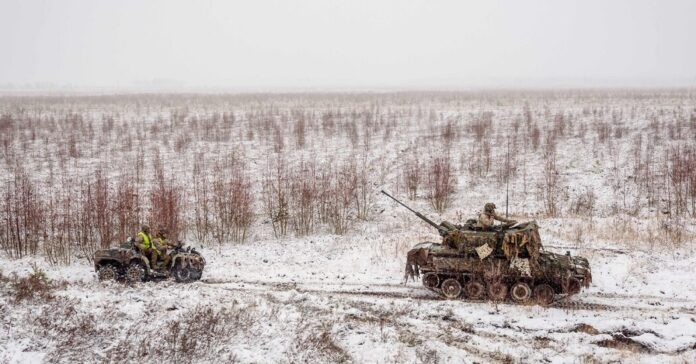 Mr. Putin’s insistence that NATO stop enlargement and remove allied forces from member states bordering Russia would draw a new Iron Curtain across Europe, and that threat has concentrated minds. It may be just what a lagging alliance has needed.

“NATO relies on momentum, and a lot of the momentum is generated by a sense of threat and fear,” said Andrea Kendall-Taylor, a former senior intelligence officer dealing with Russia, now with the Center for a New American Security.

After last year’s fiasco of Afghanistan and the humiliation of France in the Australian submarine deal, she said, “We were all thinking that we have serious problems in the alliance, and we might need to rethink the foundation of this relationship.”

But in talks this week with the Russians, NATO leaders spoke with exceptional unity for a 30-member alliance whose commitment to collective defense was increasingly in question.

The talks allowed Mr. Putin to revisit Russian grievances over how the Cold War ended, in hopes of placing them back on the table for renegotiation 30 years later. His deputy foreign minister, Aleksandr V. Grushko, even warned the alliance off a “policy of containment” of Russia and insisted that “free choice does not exist in international relations” — suggesting that Ukraine would have to bow to Russian wishes.

But the more the discussion evoked the Cold War — with its firm dividing line through Europe, and its competing Russian and Western systems and spheres of influence — the more it reminded European and American allies of NATO’s purpose.

“Deterring Russia is in the DNA of NATO, because Russia is what can bring existential threats to European nations,” said Anna Wieslander, chair of Sweden’s Institute for Security and Development.

That threat now is more than territorial, she said. Russia is also trying to undermine NATO’s democratic cohesion. “Russia is targeting our elections, our social media, our parliaments and our citizens, and it is become more obvious now that Russia is not part of our value system,” Ms. Wieslander said.

As it drafts a new strategic concept to be ready this year, NATO is concentrating on “resilience” against new hybrid and cyberthreats, highlighting its defense of the democratic institutions of member states, not just their territory.

“NATO is its member states, and it’s what allies make of it,” said Sophia Besch, a defense analyst in Berlin for the Center for European Reform. “It’s not out of business because we didn’t let it, and we’ve changed its raison d’être to what are the major strategic concerns of the day.”

The old joke was that if NATO is the answer, what is the question? Ms. Besch responded: “We’ve changed the question over the years to make NATO the answer. And now we’re back at the old question again, where NATO is more comfortable.”

NATO is especially important now for those states bordering Russia, like the Baltic nations and Poland, a country which has had deepening strains with its European partners over the protection of core democratic principles, which Brussels has accused the government in Warsaw of eroding.

But the current crisis is a reminder, even in Poland, of the importance of the alliance as a whole, and not just the country’s bilateral relationship with the United States, said Piotr Buras, head of the Warsaw office of the European Council on Foreign Relations. Ukraine has proved especially vulnerable to Russian threats perhaps precisely because it is not a NATO member.

“In Poland there was concern that NATO would lose its focus on Russian security threats, but now it’s obvious that this is the only framework that can protect us and provide long-term security,” Mr. Buras said.

There was also anxiety that President Biden, in trying to stabilize relations with Russia to pivot toward China, would bargain away forward-based NATO troops in Poland and the Baltics that were deployed after 2014.

“But there is no sign that the United States will give in on fundamental issues to NATO,” like its open-door policy and its right to deploy forces in any member state, Mr. Buras said, and Washington has been rigorous in briefing its allies about all of its discussions with Russia.

Still, he said, the current crisis “is a very clear consequence of the U.S. pivot to Asia and the realization of Russia that it might now take advantage of that reorientation of U.S. fundamental security interests,” he said. “And that issue will not go away soon.”

Russia will continue to press for a new security framework in Europe, and Europe without the United States is not prepared to play any significant role, he said, so “for Poland, NATO is the key and irreplaceable element.”

Understand the Escalating Tensions Over Ukraine

Ominous warnings. Russia called the strike a destabilizing act that violated the cease-fire agreement, raising fears of a new intervention in Ukraine that could draw the United States and Europe into a new phase of the conflict.

The Kremlin’s position. President Vladimir V. Putin of Russia, who has increasingly portrayed NATO’s eastward expansion as an existential threat to his country, said that Moscow’s military buildup was a response to Ukraine’s deepening partnership with the alliance.

Even as Poland’s battle with the European Union over the rule of law still festers, it is not an overt issue in the military alliance of NATO. But it was very noticeable that as the crisis over Ukraine mounted, President Andrzej Duda of Poland chose to veto a law, criticized by Washington, which would have stripped majority ownership of an independent television station from an American company.

As the security situation in Central Europe has worsened with Russian aggression and threats, Poland “got what we finally wanted when we joined NATO, which is allied and American troop presence on our soil — to finally bring NATO deployments beyond Germany,” said Michal Baranowski, who heads the Warsaw office of the German Marshall Fund.

That is precisely one of Russia’s current demands — that those deployments in Poland and the Baltic States be removed, a demand rejected by Mr. Biden and by NATO, to Poland’s relief.

Still, Mr. Baranowski said, the Russians have mobilized the largest military force in Europe since 1989, “and that’s scary.” The alliance, he said, “is closer to military confrontation, but at least we have not folded.”

But the crisis has also highlighted the continuing dependence of NATO on Washington. For Ivo Daalder, a former U.S. ambassador to NATO, what is striking is how much “this is the old NATO, where the U.S. is the glue, linchpin and indispensable leader of the alliance,” bringing allies together, informing them and “putting on the table the strategy we will pursue.”

What is extraordinary, he said, is that more than 70 years after the alliance was founded, “there appears to be no independent European strategy or even a European point of view different from what Washington brought to the table.” NATO has divisions, of course, Mr. Daalder said. “But all the divisions are dissolved, at least for today.”

Whether that unity will last should Mr. Putin move farther into Ukraine is yet to be seen, said Kadri Liik, an analyst with the European Council on Foreign Relations in Berlin. She sees an unwillingness in Europe to understand that the world is shifting.

“The wider public is not prepared for any change in the arrangements we’ve lived with for the past 30 years,” she said. “People think we can still sanction Russia into obeying the European security order, and that all it takes is Western unity and principles.”

But the United States is leading the world differently, Ms. Liik said. “I’m just not sure we can expect to continue to live in the world that corresponds to rules and norms and expect America to enforce them.”

That applies to Russia and Europe, too, she said. “We’re slowly headed back to a world” of confrontation between systems with different views about obeying the rules and the use of power and force.

Ms. Kendall-Taylor believes that Mr. Putin saw an opportunity to take advantage of a shakier trans-Atlantic alliance, a divided Europe and a polarized America with a weakened president.

NATO unity is real but untested, she said. “It’s too early to declare all restored, because Russia not done anything yet,” Ms. Kendall-Taylor said. “It’s a bit the calm before the storm.”

On the ground: A column of Russian vehicles, and soldiers without...