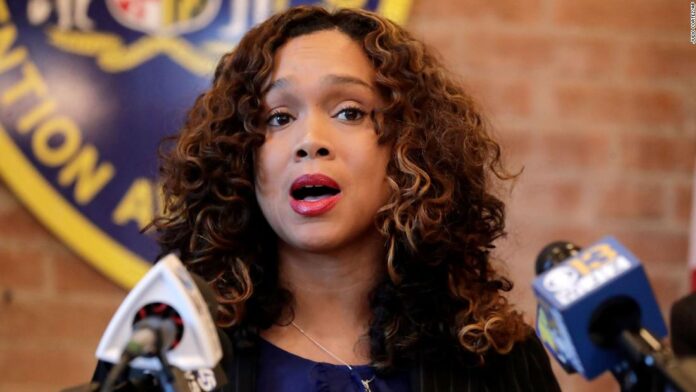 State’s Attorney Marilyn Mosby is facing perjury charges over documents she submitted to apply for loans against her retirement plan in 2020, according to the indictment. In doing so, allegedly she used a withdrawal option created under the CARES Act, passed to help people who were financially impacted by the Covid-19 pandemic.

According to the indictment, when Mosby applied for two loans against her 457(b) retirement plan, she signed documents that indicated she “experienced adverse financial consequences” due to Covid-19. However, the indictment said her gross income in 2020 was $247,955.58, an increase of nearly $10,000 from the previous year.

The money Mosby received allegedly went toward the purchase of two vacation homes in Florida, and she is also charged with making false statements on the mortgage applications, according to the indictment.

Additionally, Mosby allegedly stated that she would be the primary resident of one of the homes for at least a year in order to receive a lower mortgage rate. But she had already entered an agreement with a vacation home management company to rent out the house the week before, the indictment alleges.

Mosby’s lawyer said his client is innocent of the charges.

“I remain confident that once all the evidence is presented, that she will prevail against these bogus charges — charges that are rooted in personal, political and racial animus five months from her election,” attorney A. Scott Bolden said in a statement.

If convicted, Mosby faces a maximum sentence of five years in a federal prison for each perjury count and a maximum of 30 years for each count of making false statements on a mortgage application, according to the U.S. Attorney’s Office for the District of Maryland. She could also be forced to forfeit any property found to have been obtained by fraud, the indictment says.
The Baltimore Sun reported that she sold one of the properties in November for a $150,000 profit.

“We’re not commenting beyond what’s on the indictment. It speaks for itself,” Marcia Murphy, public affairs specialist for Maryland US Attorney Erek Barron, told CNN.

Mosby will have an initial appearance in the US District Court in Baltimore, but the hearing has not yet been scheduled, according to the US Attorney’s office.

Mosby was elected as the state’s attorney for Baltimore City in 2014 and was re-elected in 2018.

She made national news in 2015 for charging six Baltimore police officers in the death of Freddie Gray, who died in police custody after suffering a neck injury while being driven unrestrained in the back of a police van. His death became a symbol of the Black community’s mistrust of police and triggered days of protests and riots in Baltimore. None of the six officers arrested was convicted.

Column: What I want Dave Chappelle to understand about the color...