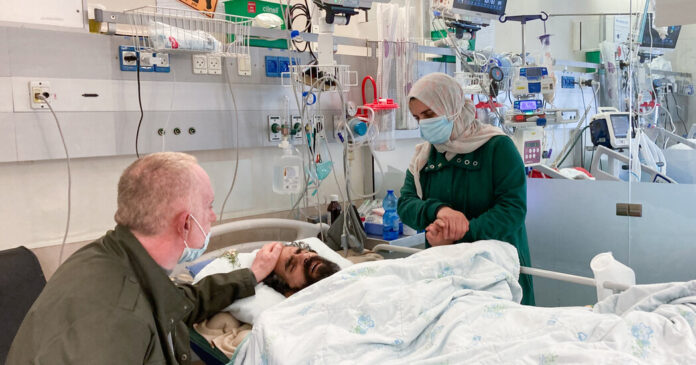 BEER YAAKOV, Israel — In the five-bed intensive care unit of a hospital in central Israel, ventilators and machines beeped and hummed. But there was a hushed quiet around Hisham Abu Hawash’s bed and the vital signs monitor above him was silent.

He had refused any medical intervention, including the machines that can monitor his declining health, and rejected food, intravenous fluids or supplements.

Mr. Abu Hawash, 40, was in his 141st day of a hunger strike, the latest Palestinian prisoner to take drastic measures to protest his open-ended detention by Israeli military authorities without charge or trial, a practice called administrative detention.

On Tuesday, after protests calling for his release and mounting fears in Israel of widespread unrest if he died in custody, Israeli and Palestinian officials reached a deal to release him next month if he ended his hunger strike immediately.

On Tuesday night, it was still unclear whether Mr. Abu Hawash, whose cognition had been severely weakened, had agreed to it.

In recent days there have been numerous protests in the occupied West Bank, Gaza and Israel calling for his immediate release and warning of retaliation if Mr. Abu Hawash died in custody.

A West Bank construction worker and father of five, Mr. Abu Hawash has become gaunt and frail. He slips in an out of consciousness and his family, lawyers and medical aid groups warned that his death could be imminent. Every few hours his wife, Aisha Hirbat, 31, roused him to try to give him a few sips of water. Sometimes he was unable to swallow and the water dribbled out of his open mouth.

Israel has used administrative detention to imprison thousands of Palestinians from the occupied territories since 1967, detaining them under military law for open-ended terms based on secret evidence. With no charges and no way to defend against them, lawyers can only petition the courts for their clients’ release.

Hunger strikes are not uncommon, though Mr. Abu Hawash’s was one of the longest in recent years.

Israel does not regularly release official numbers but the prisoner-rights group Addameer estimates that there are 500 Palestinians currently in administrative detention, including four minors.

Israeli officials did not respond to questions about the use of administrative detention, but they have said previously that it is used as a preventive tool to save lives, not as a punitive measure for actions already taken. They say that the intelligence is kept secret to protect sources.

Israel is not alone in the practice. Authoritarian countries like Egypt and China use it routinely, as does the Palestinian Authority in the West Bank.

According to a defense official familiar with Mr. Abu Hawash’s case, he was accused of being a West Bank operative for Palestinian Islamic Jihad, a militant group based in Gaza.

Israel’s internal security service, the Shin Bet, says he was involved in plans to attack Israeli civilians and soldiers, the official said. The official did not provide any evidence to support the accusation, or say whether any of the attacks were carried out.

Palestinian Islamic Jihad is considered a terrorist organization by many countries, including Israel and the United States, and has carried out numerous deadly attacks against Israeli civilians.

Mr. Hawash’s family and lawyers denied that he was a member of the group and called on the military court to present its evidence supporting the allegations against him.

“Of course they haven’t given us any evidence to prove their allegations, because this is all secret,” said one of his lawyers, Ahmed Safiya.

International humanitarian law permits occupying powers to use administrative detention as a temporary measure when a detainee presents a clear and serious threat to society, according to Omar Shakir, the Israel and Palestine director for Human Rights Watch. But he says Israel’s use of the practice goes beyond the accepted legal basis.

“Israel’s overbroad use of it, 54 years into an occupation, locking up hundreds of people with secret evidence clearly goes beyond what international law authorizes,” he said. “It makes a mockery of basic due process.”

There have been international calls for Israel to end the practice. Michael Lynk, the United Nations rights expert monitoring the occupied territories, has called it “an anathema in any democratic society that follows the rule of law.”

When he began his hunger strike, Mr. Abu Hawash weighed about 175 pounds, his family said. For months, he consumed only water and 3 grams each of salt and sugar a day, but stopped taking the sugar and salt about six weeks ago, his wife, Ms. Hirbat, said.

He now weighs less than 85 pounds. His ribs and pelvic bones jut out from a sunken stomach.

Mr. Abu Hawash, from the town of Dura, near Hebron, has spent a combined total of more than seven years behind bars in the past two decades, more than half of it without charge, according to a prisoner’s rights group, the Palestinian Prisoners Club.

After his first arrest, in 2004, he spent three years in prison after pleading guilty to charges including attempting to intentionally cause death, dealing in military equipment and helping fugitives by reporting on Israeli military movements, according to the Israeli military.

In prison, he shared a wing with Islamic Jihad members, his brother Imad Abu Hawash said. Mr. Abu Hawash became friends with them but did not join the group, his brother said.

After his release, the Israeli official said, he “continued with serious terrorist activity” and was detained again in 2008 for about nine months.

During this detention, he asked Ms. Hirbat, a Dura neighbor, to marry him.

“He was afraid that I would marry someone else and that he would miss his opportunity,” she said Sunday in the I.C.U. waiting room of Shamir Medical Center in Beer Yaakov, near Tel Aviv. “I didn’t even think twice about it. I said yes.”

They married soon after he was released.

Ms. Hirbat said she didn’t know much about his previous involvement with Palestinian resistance groups but that once they married his focus was on working long hours in construction to support his growing family.

In 2012, he was placed in administrative detention again, this time for 26 months. The Israeli official said he had been “involved in building and strengthening the terrorist infrastructure” and “promoted the purchase of weapons.”

He was arrested again in October 2020, because “he was involved in significant terrorist activity, endangering the security of the region and public safety,” the Israeli official said.

Ms. Hirbat said she tried to persuade him not to.

“He refused,” she said, explaining, “‘If I don’t do this I won’t get out for another two or three years.’”

A major motivation to take drastic measures to end his detention was his 6-year-old son, Izzedine, who suffers from kidney atrophy. Before his imprisonment, Mr. Abu Hawash’s brother said, he was working long hours to pay for his son’s operations.

Izzedine has had two operations at an Israeli hospital since his father’s hunger strike began. A third operation is on hold as his father clings to life.

As his condition has deteriorated, his case has become a rallying cause for Palestinians chafing under Israeli occupation.

At a protest in Gaza on Monday night, Khaled al-Batsh, a senior Islamic Jihad leader, said that if Mr. Abu Hawash died, his group would consider it an Israeli assassination and would retaliate.

Israeli officials were concerned that his death could touch off civil unrest.

If Mr. Abu Hawash died in custody, said Aida Touma-Sliman, a Palestinian member of Parliament from Hadash party, “they know that the West Bank will ignite and there will be pressure from the international community.”

Mr. Abu Hawash’s detention was suspended on Dec. 26 by a military court, which determined that because of his failing health he no longer posed a danger to the state, according to Israel’s prison service. That night he was transferred from a prison infirmary to the civilian hospital.

But he was still not free and not allowed to leave the hospital. Nor was his family allowed to transfer him to a Palestinian hospital in the West Bank, as they have said they wanted to do.

A guard is stationed outside his room.

Ms. Hirbat has been staying at the hospital for more than a week, sleeping next to her husband’s bed. When she is occasionally ushered out of the room as hospital staff treat other critical patients, she dons fuzzy blue slippers and waits nervously outside.

She said her husband had vowed to continue his hunger strike until he is free, and he has repeatedly warned his family not to allow doctors to feed him intravenously no matter his condition.

“Hisham is going to continue whether it is martyrdom or victory,” Ms. Hirbat said. “Even if it’s martyrdom it will be a victory, because he did not capitulate to them.”

Lava from Spanish volcano heads toward sea; no injuries, 5,000 evacuated

‘Not the Same’: Residents of Del Rio Feel the Impact of...