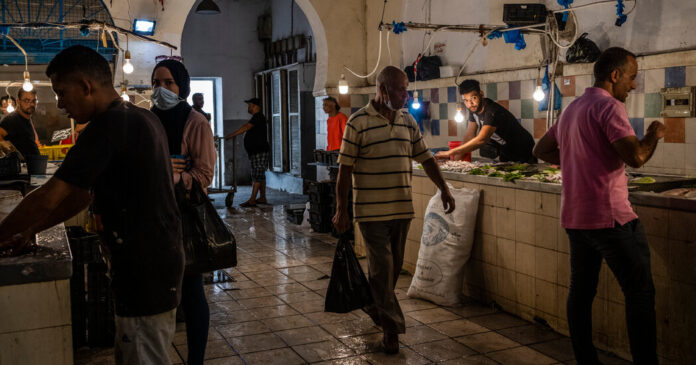 TUNIS — During the pre-dinner rush near Tunis’s port one recent evening, Haji Mourad, 45, the proprietor of a small grocery store on the main road, greeted his customers with a smile and a joke.

They laughed as they paid for their chicken and canned tomatoes. But the humor was of the gallows variety.

“How about if you give us some dollars? And try to get me a visa to America,” he teased a visiting American, before turning serious. “People are worried, they’re scared,” he said. “Everything has gotten so expensive — eggs, meat, vegetables. It looks like there’s a monster coming.”

That monster would be the threat of economic implosion, from which their president, Kais Saied, vowed to rescue the country when he suspended Parliament and began ruling by decree in July, a power grab that threw Tunisia’s decade-old democracy into doubt.

As Mr. Saied steers Tunisia toward a national dialogue and constitutional referendum that critics say may cement his authoritarian rule, pressure is growing on him to fulfill his pledge. The question is whether he can.

Already deeply indebted and running a large deficit after years of mismanagement and the pandemic, the government recently announced that it expected to borrow nearly $7 billion this year. For that, Tunisia must turn to international lenders including the International Monetary Fund, which has demanded painful austerity measures. Those could cut into the wages of a broad swath of Tunisians and slash government subsidies just as the price of electricity and basic food items is climbing — a formula that could lead to protests and mass unrest.

International lenders have also urged Mr. Saied to return the country to more inclusive, constitutional governance. But when it comes to his political road map, Tunisians are living in uneasy suspense.

A series of what he has described as online and in-person “consultations” with citizens over constitutional amendments, scheduled to begin this month, faces doubts over transparency and security. Members of a commission assigned to draft a new constitution have not been appointed.

The government has yet to start logistical preparations for, or budget for, the constitutional referendum set for July 25. Parliament remains suspended.

The authorities have targeted some of Mr. Saied’s critics, prosecuting or detaining several opposition politicians and businesspeople. They have also shuttered opposition news media outlets over what the government said was licensing issues.

On Friday, Tunisian security officers seized and detained Noureddine Bhairi, the deputy chairman of Ennahda, the Islamist political party that once dominated Parliament and has called Mr. Saied’s July actions a coup.

Ennahda officials said Sunday that Mr. Bhairi had still not been located, and that his health condition was deteriorating. In a letter to Mr. Saied, Rachid Ghannouchi, the party’s leader, called on the president to release him or, failing that, to allow a “medical and human rights team” to visit him.

“I very much doubt that the I.M.F. can put a program together as long as there is so much political uncertainty,” Ishac Diwan, an economics professor specializing in the Arab world at Paris Sciences et Lettres, said in an email. “And conversely, a poorly cooked program with harsh austerity will hurt the ongoing (and very important) political process.”

In other words, Tunisians feeling their wallets empty out may not stand for Mr. Saied’s plans for much longer. But despite eroding support from political parties and unions that once backed him, Mr. Saied still enjoys remarkable support across the country.

His move to seize power in July drew throngs of cheering Tunisians into the streets, producing an 87 percent approval rating in one poll at the time. Though the number of Tunisians who say they are satisfied with his performance is slumping, to between 62 and 67 percent in recent surveys, it would still please most politicians. (The percentage of those polled who would vote for him in a hypothetical presidential election stands even higher, at 76 percent.)

There have been some signs of discontent. In Tunis, the capital, hundreds of people regularly demonstrate against Mr. Saied. In Kasserine, a marginalized province in central Tunisia, hundreds have recently protested over the lack of jobs and high prices, and one demonstrator died in November after inhaling tear gas when the riot police broke up a protest over an overflowing landfill and waste-handling problems outside Sfax, Tunisia’s second-largest city.

Combined with other, smaller, scattered protests, the overall number of demonstrations in the months since Mr. Saied took power has topped that of the same period for the two years prior, according to data collected by the Tunisian Forum for Economic and Social Rights.

“He’s adding to the problems,” said Dhoha Hamami, 36, who was shopping for groceries on a recent afternoon in Tunis’s port neighborhood, La Goulette, citing the president’s troubled rollout of a coronavirus vaccination registry and plans to freeze public sector salaries. “He doesn’t live in the real world.”

Still, the protests have been minor in a country where demonstrations over economic stagnation have become a regular winter feature, especially since the country’s 2011 Arab Spring revolution failed to deliver on its promises of better jobs and better lives.

If anything, analysts said, they had expected more demonstrations as Mr. Saied’s pledges of economic rescue remain unfulfilled.

That could still happen, as Mr. Saied’s critics confidently predict.

“When you hold too many powers in one hand, that makes you accountable for everything,” said Said Ferjani, an Ennahda member of Parliament. “He’s had it for many months and he hasn’t delivered.”

To reduce the deficit, the government said last week that it would impose or increase a variety of small taxes, including one on transportation and another on paper receipts for shoppers, which will add up quickly for Tunisians already struggling to afford necessities. As wheat prices have soared worldwide and Tunisia’s budget faces a shortfall, the country may not be able to continue subsidizing bread for citizens, economists warn.

Tunisia may also have to consider privatizing some of its state-run companies and cutting its huge public-sector wage bill, which accounts for more than half of public spending.

Mr. Saied’s one-man rule has exempted his actions from oversight, so his budget has gone undebated by legislators, his economic agenda has been shaped out of sight and his political proposals have remained murky. His authoritarian tendencies and populist rhetoric have frightened businesspeople, said Issam Ayari, a director at Tunisie Valeurs, a financial services firm, pushing foreign investment at the end of the third quarter to its lowest level since 2010.

On the political front, the online and in-person consultations are set to take place over the next three months, with citizens invited to answer multiple-choice questions and offer comments on topics including Tunisia’s electoral process, development, educational system, health care and the economy.

But analysts said it was unclear how transparent the process would be, since the government had not announced whether the results would be public or how they would influence the new constitution, which is to be drafted by a commission appointed by Mr. Saied.

“I think it’s just a way to legitimize the decision they’re already going to make,” Mohamed-Dhia Hammami, a Tunisian political researcher and analyst, said of the consultations.

There are also questions about the security of the online consultations, given that the government recently struggled to protect its online coronavirus vaccine registry from tampering. (The platform crashed just days before Tunisians were required to start showing proof of vaccination to enter public places.)

Amid the political uncertainty and deepening economic hurt, Tunisia has also seen what human rights advocates say is a subtle, but alarming, deterioration in freedoms since Mr. Saied seized power, recalling the days when Tunisia’s ex-dictator, Zine el-Abidine Ben Ali, ruled the country.

A former president, Moncef Marzouki, was sentenced to four years in jail in absentia after calling Mr. Saied a “dictator” and urging France to stop supporting him.

A gay rights activist was beaten by the police in October, showing what activists said was increased targeting by the police since July 25. Several politicians and social media commentators and a television host have been prosecuted in civilian and military courts for criticizing the president — a type of prosecution Mr. Saied has publicly endorsed.

“If you are publicly criticizing Saied and calling what he did a ‘coup,’ you are inviting prosecution,” said Eric Goldstein, the acting Middle East and North Africa director at Human Rights Watch. “It’s bad enough to get prosecuted for criticizing the president. To be prosecuted for it before a military court is a double whammy we didn’t see in the worst years of Ben Ali’s presidency.”

Will Israeli airline El Al receive the carrot or the stick?