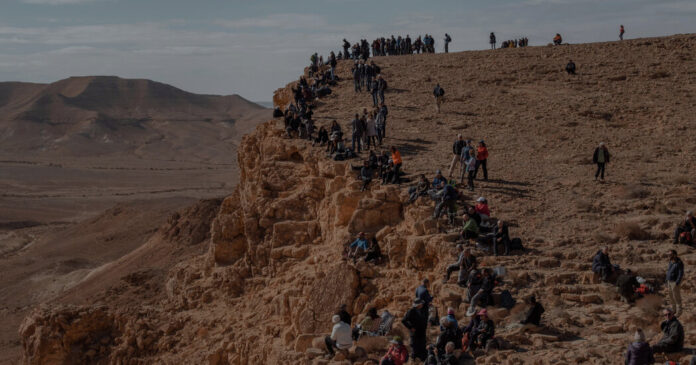 MOUNT KARKOM, Israel — The mountain kept its secrets for centuries, its air of sacred mystery enhanced by a remote location in the Negev Desert in southern Israel.

But one day last week, hundreds of Israeli adventurers headed deep into the wilderness to reach Mount Karkom, determined to get closer to answering a question as intriguing as it is controversial: Is this the Mount Sinai of the Bible, where God is believed to have communicated with Moses?

Mount Sinai’s location has long been disputed by scholars both religious and academic, and there are a dozen more traditional contenders, most of them in the mountainous expanses of the Sinai Peninsula across the border in Egypt.

But Mount Karkom’s claim has gained some popular support because of an annual natural phenomenon that an intrepid group of archaeology and nature enthusiasts had come to witness for themselves.

In 2003,a local Israeli guide and ecologist happened to be atop Karkom’s vast plateau one day in late December around the time of the winter solstice, when he came upon a marvel.

At midday, with the sun low in the sky on one of the shortest days of the year, he peered across a deep ravine and spotted a strange aura of light, flickering like flames, emanating from a spot on a sheer rock face.

It was sunlight reflected at a particular angle off the sides of a cave, but the discovery soon made its way to Israeli television and was fancifully named “the burning bush.” Perhaps this, some said, was the supernatural fire that, according to the Book of Exodus, Moses saw on the holy mountain when God first spoke to him, and where he would later receive the Ten Commandments as he led the Israelites out of Egypt.

The burning bush, never consumed by the fire, is symbolic in Judaism, Christianity, Islam and other faiths including Baha’i.

But decades before this accidental astronomical discovery, Mount Karkom was already captivating some archaeologists with hints that the site had played an important spiritual role thousands of years ago.

More than half a century ago, Emmanuel Anati, a young Italian archaeologist, found an extraordinary concentration of thousands of rock carvings and rock circles as he surveyed the plateau of Mount Karkom, about 2,500 feet above sea level. Among the rock drawings are many of ibexes, but also some that have been interpreted as depicting the tablets of the commandments or other references from the Bible.

At the base of Mount Karkom, named in Hebrew for a desert crocus, there is evidence that ancient migration trails converged here and that cultic rituals took place in the area. Mr. Anati identified what he thought was a sacrificial altar with the remains of 12 pillars of stone that could conceivably correspond to the one described in Exodus 24 that Moses built, representing the 12 tribes of Israel.

In his writings, Professor Anati said he had not set out to look for Mount Sinai. But after years of fieldwork and exploration, he proposed in the early 1980s that, on the basis of topographical and archaeological evidence, Mount Karkom “should be identified with the sacred mountain of the biblical narrations.”

But aside from usual difficulties of desert archaeology — nomads tend to leave few permanent traces — and the whole question of whether any archaeology could be tied to the biblical story of the Exodus at all, Professor Anati’s theory posed a problem of chronology.

Israel Finkelstein, a professor emeritus of archaeology at Tel Aviv University and an early critic of Professor Anati’s theory, said that most, if not all, of the datable sites around Mount Karkom are from the third millennium B.C.

“So there is more than one millennium gap between the reality at Karkom and the biblical tradition,” Professor Finkelstein said, adding that since the evidence is vague, and identifying such sites as cultic is a matter of interpretation, “It is perhaps safer not to speculate.”

However heated the academic debate, the air was chilly when a convoy of sturdy jeeps with four-wheel drive set out for the mountain through jagged terrain at dawn on the day of the winter solstice.

Access to Mount Karkom is usually limited to weekends and certain holidays because it requires passing through a military firing and training zone. A paved road that helps shorten the hourslong journey, much of which takes place on dirt tracks, has mostly been closed to civilian traffic in recent years because of the fear of cross-border attacks by Islamic militants from the Sinai.

This year, in a midweek first, the military opened the paved road and allowed passage through the firing zone for the Burning Bush seekers.

As the group arrived in the parking lot at the foot of Mount Karkom, there was an unexpected bonus: Professor Anati, now in his early 90s, was sitting in a deck chair, holding court and promoting his books.

In the search for Mount Sinai, Professor Anati said, some insist for political or nationalistic reasons that the site must be within the borders of Israel, not in Egypt. Others, for religious reasons, say it must be outside the borders, to comply with the tradition of the Israelites wandering in the desert for 40 years before reaching the Promised Land.

“None of these approaches is correct; one must seek the truth,” Professor Anati said. “I bring all the opinions and evidence and let the reader decide for themselves,” he said, adding of the mountain’s treasures, “This is the story of the history of humankind.”

After a steep climb up the side of Karkom to its windy plateau, scores of people fanned along the ridge and peered across the ravine at the distant window in the cliff to spy the “burning bush.”

Without binoculars or biblical vision, it was possible to make out a strange, if faint, glow, though some visitors expressed disappointment that the aura around the cave mouth was not more fiery.

But stumbling across the rocky plateau, it was thrilling to come across pieces of ancient rock art, the images chipped into the dark brown patina of stones, exposing the light limestone below.

Shahar Shilo, a researcher who manages the Negev Highlands Tourism cooperative, spoke of the importance for ancient peoples of being able to measure the seasons for agricultural purposes, and the holiness imbued in those who could identify with precision the shortest day of the calendar.

Mr. Shilo also had a more prosaic explanation for why Mount Karkom had drawn people there in the distant past: the ready supply of quality flint that was crucial for anything from hunting to household tools. Even after much of humanity had advanced into the Bronze and Iron Ages, he said, the desert dwellers here still depended on stone.

Whether this is Mount Sinai and the winter solstice phenomenon the burning bush “is in the eye of the beholder,” Mr. Shilo said.

Covid-19 updates for two September – because it occurred