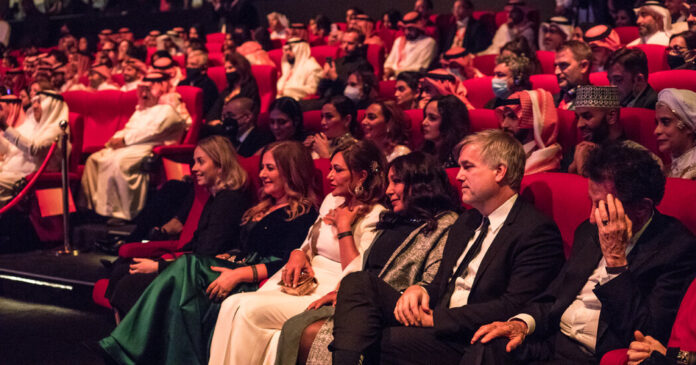 JEDDAH, Saudi Arabia — A pregnant Saudi woman, far from home, finds herself stalked by inner and outer demons. A wannabe Saudi vlogger and his friends, menaced by the internet’s insatiable appetite for content and more mysterious dangers, try to escape a dark forest. At a wedding, the mother of the bride panics when her daughter disappears with all of their guests waiting downstairs.

These were just a few of the 27 Saudi-made films premiering this month at a film festival in Jeddah, part of the conservative kingdom’s huge effort to transform itself from a cultural backwater into a cinematic powerhouse in the Middle East.

The Saudi push reflects profound shifts in the creative industries across the Arab world. Over the past century, while the name Saudi Arabia conjured little more than oil, desert and Islam, Cairo, Beirut, Damascus and Baghdad stood out as the Arab cultural beacons where blockbuster movies were made, chart-topping songs were recorded and books that got intellectuals talking hit the shelves.

But over the past decade, those legacies have been battered by conflicts, financial meltdowns and state failures. Years of war have damaged Syria’s television studios and Baghdad’s publishers. An economic collapse has left Lebanon’s art-house cinemas struggling to keep the lights on.

Egypt’s vaunted film industry, which made the country’s dialect the most widely understood Arabic, has been in artistic decline for years, and its TV shows have been hijacked by the country’s intelligence services to promote pro-government themes.

In many ways, the region’s cultural mantle is up for grabs, and Saudi Arabia is spending lavishly to seize it.

At the Red Sea International Film Festival, held on a former execution ground, Jeddah residents rubbernecked as stars like Hilary Swank and Naomi Campbell strutted down a red carpet in revealing gowns, and Saudi influencers D.J.-ed at dance parties.

All this in a country where, until a few years ago, women were not allowed to drive, cinemas were banned and aspiring filmmakers often had to dodge the religious police to shoot in public.

“It’s our time to shine here in Saudi Arabia,” said Mona Khashoggi, a Saudi film and theater producer who was darting around a talent fair that the festival was holding for aspiring Saudi filmmakers. A government official had just announced that the kingdom would support the production of 100 films by 2030, showering new projects with financing, permits and prestige.

The change is driven by the de facto Saudi ruler, Crown Prince Mohammed bin Salman, who wants to shake off the kingdom’s staid image by building an entertainment industry to stimulate the economy and create jobs.

The government has enticed three big-budget Hollywood productions to film in the country with financing and government-supplied helicopters and fighter jets, hoping to overtake Jordan and Morocco as the go-to destination for spectacular desert landscapes.

During a panel discussion at the festival, Bahaa Abdulmajeed, an official from the Saudi Investment Ministry, said the kingdom had one goal, “to make Saudi Arabia a new hub for filmmaking in the region.”

After Mr. Abdulmajeed enumerated the many carrots the kingdom was dangling to attract the film industry, the panel’s moderator, the Variety reporter Nick Vivarelli, laughed. “OK,” he said. “So the red tape will be nonexistent and you’re rolling out the red carpet, in a nutshell.”

It is decades behind in building a class of skilled creators and technicians. And many Arab professionals are reluctant to move to a socially conservative monarchy where alcohol is banned and the government jails dissenters for mild criticisms.

Some industry veterans questioned how long the Saudi movie mania would last, pointing to previous attempts by the United Arab Emirates and Qatar to create film industries by sheer force of wallet, initiatives that came up short. Others asked when the industry would become profitable, not just fueled by government oil wealth.

“As long as the idea is, ‘We will push cultural entrepreneurship provided the barrel is above $70,’ then this is bound for failure,’” said Mazen Hayek, a media communications adviser and a former spokesman for MBC, the Arab world’s largest television network, based in Dubai, United Arab Emirates.

To cultivate creative culture, he said, Arab countries must ensure personal freedoms, rule of law, free-market practices and tolerance, including for L.G.B.T.Q. rights.

“You are going to have freelancers who are brilliant in their sectors but who don’t necessarily want to work with governments or in state-owned enterprises,” Mr. Hayek said.

Some industry veterans wondered — with a whiff of snobbery — whether Arabs from other countries would watch Saudi films.

“In Saudi Arabia, they have the money, they have the means. But we have richness in stories,” said Philippe Aractingi, a French-Lebanese director and producer. “They are injecting huge amounts of money, but how long will they sustain it?”

In its favor, Saudi Arabia has a population of 22 million, meaning it can support a homegrown industry better than its tiny gulf neighbors, said Faisal Baltyuor, the head of a Riyadh-based film distributor, CineWaves.

Although Saudi Arabia’s population is about a fifth of Egypt’s, the Saudis are more affluent and wired, making them more likely to pay for streaming services and movie tickets. At about $18, a ticket in Saudi theaters is among the most expensive in the world.

But the kingdom only allowed cinemas to reopen only in 2018 after a 35-year ban. Before that, Saudis escaped to nearby Bahrain or Dubai to go to theaters.

Now, the country has 430 screens and counting, making it the fastest-growing market in the world, with a target of 2,600 screens by 2030, Mr. Abdulmajeed said.

Rather than drown out its neighbors, Saudi Arabia’s opening may bolster the rest of the region’s filmmakers, too.

The popularity of Egyptian content in Saudi Arabia makes it a tempting market for Egyptian studios, said Mohamed Hefzy, the head of Film Clinic, a Cairo-based production company.

Several Saudi-Egyptian collaborations are in the works, and an Egyptian “Hangover”-style comedy, “Wa’afet Reggala” (“A Stand Worthy of Men”), was the highest-grossing release in Saudi Arabia this year, beating the Hollywood blockbusters.

Saudi productions may also continue to draw acting, writing and directing talent from Lebanon, Syria and Egypt — and will most likely need to do so to reach non-Saudi audiences, said Rebecca Joubin, an Arab studies professor at Davidson College in North Carolina.

Five Movies to Watch This Winter

“With Saudi opening up, they say in Egypt that it’s saving Egypt’s movie industry,” said Marwan Mokbel, an Egyptian who co-wrote “Junoon,” the Saudi horror film about the vlogger that premiered at the Jeddah festival.

Saudi shows and movies are emerging as the region’s watching habits are transforming, creating opportunities. Many young Arabs have abandoned the Ramadan television series that dominated their parents’ screens for international series streamed on Netflix and Shahid, its Dubai-based Arabic counterpart.

That has created a big market for Arabic-language content.

Netflix has produced Jordanian, Egyptian and Syrian-Lebanese shows, with varying degrees of success, and just announced the release of its first Arabic-language feature film, “Perfect Strangers.”

Syrian and Lebanese studios that used to depend on gulf financiers — who, they complained, often forced them to water down their artistic ambitions by nixing political themes — are also turning to web series and Netflix for new funding and wider audiences.

The gold-rush atmosphere can be surreal for the Saudi filmmakers who struggled when cinemas at home were banned, film permits were tortuous to secure and the industry was shunned.

Telfaz11 started out on YouTube, where its videos hooked young Saudis looking for a hip alternative to the somnolent broadcast television. Mohammad Makki recalled dodging the police, guerrilla style, to film the first season of his show “Takki,” about a group of Saudi friends navigating Saudi social constraints, a decade ago. Then, it was a low-budget YouTube series. Now, it is a Netflix hit.

“We grew up dying to go to the cinema,” he said, “and now it’s two blocks from my house.”

Saudi women in the industry faced even greater challenges.

When “Wadjda” (2012), the first Saudi feature directed by a woman, was filmed, Haifaa al-Mansour, the director, was barred from mixing in public with male crew members. She worked instead from the back of a van, communicating with the actors via walkie-talkie.

“I’m still in shock,” said Ahd Kamel, who played a conservative teacher in “Wadjda,” which portrays a rebellious young Saudi girl who desperately wants a bicycle, as she walked through the festival. “It’s surreal.”

As a young actress in New York, Ms. Kamel hid her career from her family, knowing they, and Saudi society, would not approve of a woman acting. Now, she said, her family pesters her for festival tickets, and she is preparing to direct a new film to be shot in Saudi Arabia.

Marvel’s big-budget “Eternals” was not released in Saudi Arabia — or in Qatar, Kuwait or Egypt — because of gay romantic scenes. Several of the non-Saudi films screened at the Jeddah festival, however, included gay scenes, nudity and an out-of-wedlock pregnancy.

Hisham Fageeh, a Saudi comedian and actor, said officials had told him future films should avoid touching directly on God or politics.

But the filmmakers said they were just happy to have support, accepting that it would come at the price of creative constraints.

“I don’t intend to provoke to provoke. The purpose of cinema is to tease. Cinema doesn’t have to be didactic,” said Fatima al-Banawi, a Saudi actress and director whose first feature film the festival is funding. “It comes naturally. We’ve been so good at working around things for so long.”

Does Nikki Haley’s highway to the White Home begin in Jerusalem?