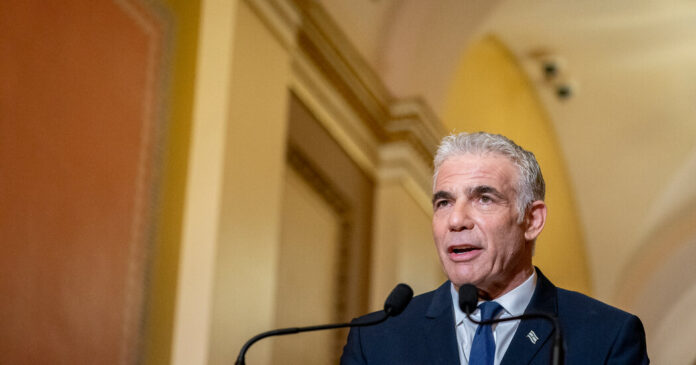 Mr. Lapid also said his government — a diverse coalition of right-wingers, leftists and centrists like himself — was much more focused on internal issues like protecting Israeli democratic institutions and safeguarding the Israeli economy than on finding a solution to the Palestinian question.

He underscored Israel’s opposition to American efforts to reopen a U.S. consulate to the Palestinians in Jerusalem, which was closed under the Trump administration. Mr. Lapid said reopening the consulate would constitute a challenge to Israeli sovereignty in Jerusalem, which Israel sees as its indivisible capital; Palestinians hope it will one day be divided, with the eastern part forming the capital of a Palestinian state.

Israelis have vigorously debated whether to support the negotiations with Iran, which resumed in Vienna earlier this month, or to urge the United States and Europe to abandon the effort. When he was still prime minister, Benjamin Netanyahu opposed the Obama administration as it forged the nuclear pact — taking the remarkable step of lobbying against it in Congress — and in 2018 pushed Mr. Trump to abandon it.

Iran had largely complied with the agreement while it was in place, keeping its enrichment of nuclear fuel within the required levels, and under the inspection of the International Atomic Energy Agency. In recent times, as Iran’s enrichment levels have reached new heights and inspectors have been banned, a number of former Israeli military and intelligence officials have said they now think they were better off with the treaty in place.

Mr. Lapid appeared to be trying to close the gap with the United States.

“The majority of Israelis, including the opposition, felt that the J.C.P.O.A. was not a good enough deal,’’ he said, referring to the nuclear pact by its formal name, the Joint Comprehensive Plan of Action. That was in part because of its “sunset provisions” on enrichment activities, he said, which would allow Iran to produce as much nuclear material as it wanted beginning in 2030.

Mr. Lapid declined to comment on the Israeli sabotage efforts, but said that whatever is happening to Iran’s nuclear facilities has nothing to do with the negotiations. “The only thing I can say to you is that Israel has said many times: We have the right to protect ourselves from the biggest existential threats.”

Shared fears over Iran have helped redefine the diplomatic map in the Middle East, allowing Israel to begin to normalize diplomatic relations with four Arab countries that had previously shunned the country because of the lack of resolution to the Israeli-Palestinian conflict.