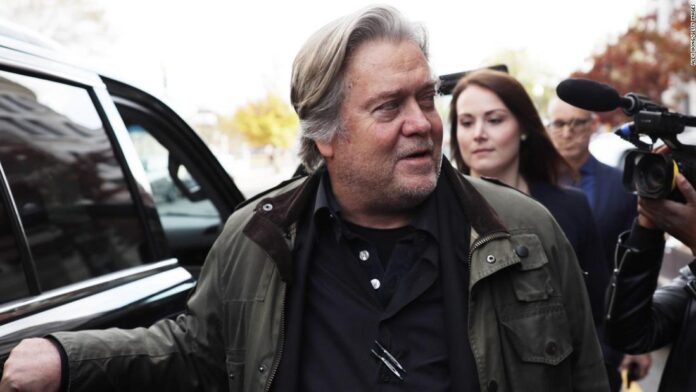 The schedule puts the high-profile case front-and-center as the 2022 midterm campaign is full swing, though Bannon was seeking to delay the trial even later — proposing that it begin in mid-October.

“It seems to me you don’t need 10 months to do this,” Nichols said at a Tuesday status conference in the case, while concluding that that the Justice Department proposal for a mid-April trial would move things along too quickly. Nichols is blocking off two weeks for the trial.

The prosecution stems from a referral from the US House of Representatives after Bannon failed to cooperate with the House’s January 6 probe. Bannon has pleaded not guilty to the contempt charge. Should Republicans take over the House in the midterm elections, the special committee investigating January 6 would expire at the end of 2022.

Disagreement over what evidence from the government Bannon can make public

The hour-long status conference covered both the trial timeline and a dispute over the Justice Department’s proposed protective order for restricting public disclosure of evidence the government turns over to Bannon in the case.

Bannon claims the proposed order would stifle his defense preparations, while the government has accused Bannon of seeking “to abuse criminal discovery to try this case in the media rather than in court.” (CNN has joined several other media organizations in challenging the proposed protective order as well).

The Justice Department is arguing that discovery pertaining to law enforcement reports of witness interviews and internal communications among congressional staffers should not be released publicly unless it is filed in court documents related to legal disputes in the case.

Amanda Vaughn, a Justice Department attorney, said Tuesday that the release of that evidence and public commentary around it could inappropriately influence witness testimony at trial.

“We do believe the committee’s discussions about Mr. Bannon’s subpoena…is the business of the public,” David Schoen, an attorney for Bannon, said.

Nichols sounded somewhat skeptical of Bannon’s arguments, but also had pointed questions for the DOJ’s position. Nichols, a Trump-appointee, did not issue a decision on the protective order from the bench, and he said he would be taking it under advisement.

Schoen previewed other arguments Bannon will make in the case, as a dispute is shaping up over additional discovery Bannon has suggested he will seek from the government, such as internal documents from the White House or the Justice Department concerning the decision to charge Bannon.

Vaughn made clear that prosecutors would not hand over those kinds material without an order from the judge.

Schoen, arguing that Bannon would have been willing to litigate the legality of the House subpoena in a civil case, said that the criminal charge was “probably the last way to get information.”

Schoen suggested that the Justice Department had a “bad motive” for bringing the charges, arguing that “there has been a radical deviation from protocol and from the Office of Legal Counsel opinions” in this case. He also brought up comments President Joe Biden made, before the charges were brought against Bannon, telling reporters that January 6 probe witnesses who weren’t cooperating with the House probe should face prosecution.

“What went on in the White House?” Schoen asked, noting that the President of the United States was weighing in publicly.

Bannon has not formally made the request for additional discovery. Nichols asked that the parties file by December 16 a status report laying proposed deadlines for that filing and other pre-trial steps in the case.

This story has been updated with details of the hearing and judge’s action.

Dog Recovering After Paws Are Shocked At Diversey And Orchard In...