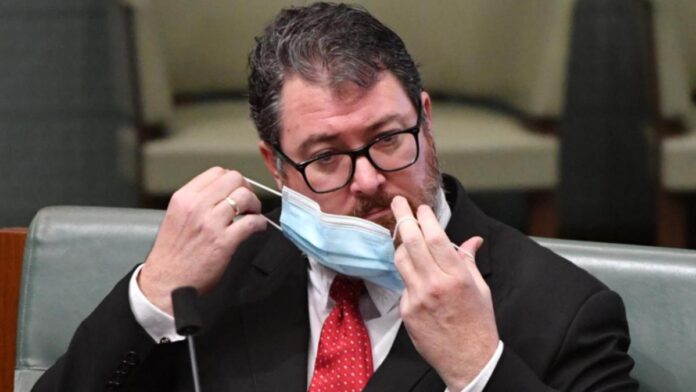 Nationals MPs insist colleague George Christensen’s remarks on a US far-right online show about coronavirus do not represent the views of the party.

However, they have stopped short of calling for the Queensland MP to be stripped of his party membership.

In an appearance on Alex Jones’s InfoWars, Mr Christensen advocated for people to protest outside Australian embassies overseas over COVID-19 restrictions.

He also laughed when comparisons were made between Australia’s quarantine program and a Nazi-era concentration camp.

Victorian Nationals MP Darren Chester told the ABC he won’t miss Mr Christensen when he retires at the next federal election.

“I don’t want to wish ill of anyone, but I think his time in parliament has passed, and it won’t be a sad day for me when he’s no longer a member of parliament,” he said on Wednesday.

Mr Chester said any decision to strip Mr Christensen of his party membership ahead of the election due by May would be up to the state branch.

“I’ve been troubled by a lot of the comments that colleagues have made,” he said.

“Each of the state jurisdictions holds their members of parliament to account, so it’s up to the executive of the (Queensland) LNP to hold George to account.”

In a statement late on Tuesday, Prime Minister Scott Morrison denounced the comments by Mr Christensen.

Treasurer Josh Frydenberg, whose parents are Jewish immigrants, said he had spoken with Mr Christensen following his appearance on the show.

“I rang George yesterday and spoke to him and he did apologise to me, and I reminded him about the importance of our comments,” he told the Seven Network on Wednesday.

“We have a collective responsibility and duty to speak out about these very false analogies.”

Meanwhile, a second government MP has come under fire for appearing on another US far-right program hitting out at Australia’s COVID-19 restrictions.

On the podcast, the senator said state governments were drifting into authoritarianism and that he was being held by health authorities in a detention facility.

Senator Antic appeared on the podcast from hotel quarantine in Adelaide, where he was taken after returning from Canberra following the end of the last parliamentary sitting week.

Unvaccinated arrivals to South Australia from interstate are required to undergo 14 days of hotel quarantine.

Senator Antic has declined to reveal his vaccination status.

Schools prepare for RAT rush before return to classroom

Newest snapshot of the coronavirus influence