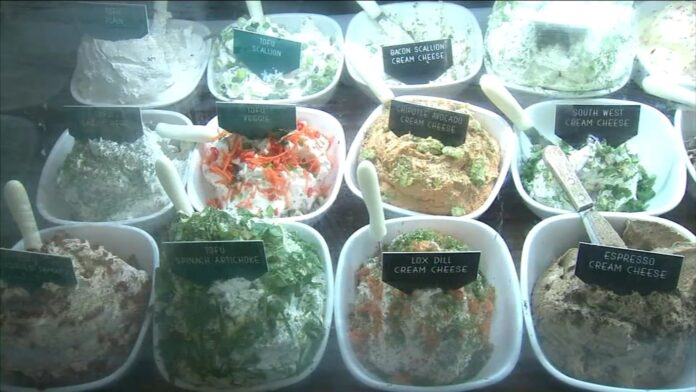 EAST VILLAGE, Manhattan (WABC) — The nation’s supply chain crisis is bad, but the latest shortage on cream cheese is sure to hit a city like New York City especially hard.

If you thought you nearly lost your mind during the shutdown, just remember … you had bagels and cream cheese.

Could you have survived without it? Many people Eyewitness News spoke to were unsure.

But a New York institution is now under threat because of supply chain issues.

At Tompkins Square Bagels in the East Village and across the city, there is a cream cheese scare.

“We have espresso, jalapeño cheddar, birthday cake,” said Christopher Pugliese of Tompkins Square Bagels. “This will probably get us until about Wednesday. Maybe late tomorrow.”

Pugliese says he was told by his suppliers that there’s a big issue with trucking and getting Class A truckers.

“We’re also being told that the shipping containers, because we get these big 50 pound, 100 pound blocks, so my guys are telling me those are all stuck on ships on ports,” he said.

They have been open for a decade, but they’ve never been spread so thin supply. But COVID and the supply chain issues did this to them twice this year.

Two months ago, it was a flour shortage.

“That one, and that one was scary because that would’ve been a knockout punch,” Pugliese said.

The Kraft Heinz Company says the cream cheese recipe was born in New York sometime in the 1870s.

A company spokesperson says not to panic:

“As more people continue to eat breakfast at home and use cream cheese as an ingredient in easy desserts, we expect to see this trend continue. As such, we’re shipping 35% more product to foodservice partners, such as bagel shops, vs. year-ago.”

At Tompkins Square Bagels, they’ve got plans to readjust too.

That might be the recipe for anarchy in the city.