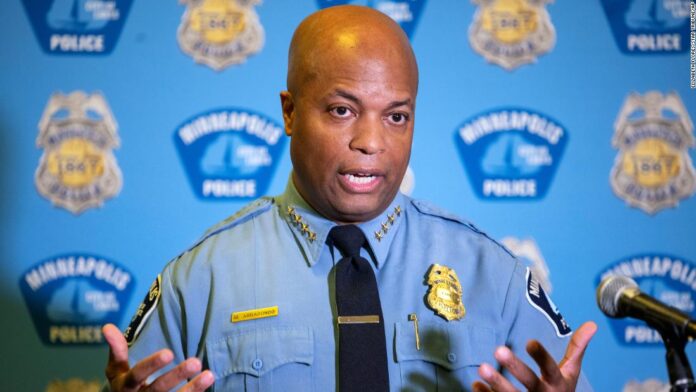 “After much personal reflection and thoughtful discussions with my family and Mayor Frey, I have made the decision that I will not be accepting a new term as chief of the Minneapolis Police Department,” Arradondo said.

He was the city’s first Black police chief, appointed in 2017.

Arradondo said Monday his decision to retire was based on time and not Floyd’s murder.

Video of the incident that led to Floyd’s death showed former officer Derek Chauvin impassively kneeling on the 46-year-old Black man’s neck and back while he was handcuffed and lying prone in the street for more than nine minutes, gasping for air and telling Minneapolis officers, “I can’t breathe.”

In June 2020, Arradondo told CNN that a meeting with George Floyd’s family was “gut-wrenching” under the circumstances.

“I looked them in the eye and I said, ‘I’m sorry’ and said ‘their brother’s death is not in vain,'” he said. “The grace and the love that they showed, they hugged me and we hugged.”

Arradondo called Floyd’s death at the time a “murder” and fired four officers, saying all involved in Floyd’s death bear the same responsibility.
Chauvin was convicted in April on state murder charges. He plans to appeal that conviction.
Arradondo testified at Chauvin’s trial that the kneeling was a violation of the policies around de-escalation, objectively reasonable use of force and requirement to render aid.

“Once Mr. Floyd had stopped resisting, and certainly once he was in distress and trying to verbalize that, that should have stopped,” Arradondo testified.

Chauvin and former officers Tou Thao, J. Alexander Kueng and Thomas Lane have pleaded not guilty to federal civil rights charges stemming from Floyd’s death.
The state trial for Thao, Kueng and Lane, accused of aiding and abetting the murder of Floyd, has been postponed until March 2022.

Mayor Jacob Frey on Monday thanked Arradondo for his service.

“Throughout his time within the MPD, he’s been unabashed about his commitment to truth, to transparency, and to justice,” the mayor said.

Frey said he would announce an interim chief in the coming days.

Despite a “defund the police” measure failing at the ballot this year, Frey and Arradondo announced several key changes to the department, according to a recent report, including an overhaul to its use of force policy, a new policy on “no-knock” warrants, and a new requirement to report instances of police de-escalation attempts.

Arrandondo, who grew up in Minneapolis, said he’s “been blessed beyond measure to have served the people of this truly wonderful city.”

“After 32 years of service, I believe that now is the right time to allow for new leadership, new perspective, new focus, and new hope to lead the department forward in collaboration with our communities,” the chief said.

Joe Biden aims to ramp up his public sales pitch for...