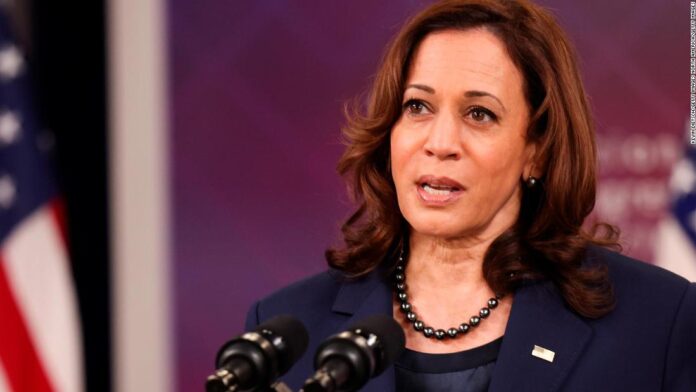 At the summit, Harris will issue a nationwide call to action to the private and public sectors and announce a series of federal reports and guidance, among other things aimed at improving maternal health in the United States.

The United States continues to have the highest maternal death rate of all developed countries, according to researchers. And Tuesday’s summit marks the administration’s latest attempt to grapple with the public health issue and call for actions to address it.
The White House in April issued a presidential proclamation for Black maternal health week to address the crisis and Harris held a roundtable featuring women impacted. Black and Native American women in the United States are more likely to die in pregnancy or childbirth than are any other demographic. And in November, President Joe Biden signed legislation that addresses maternal mortality among female veterans by authorizing $15 million for the Veterans Affairs maternity care coordination programs.

Senior administration officials point to Harris’ work on the issue from her career as a district attorney in California to now, including introducing the Maternal Care Act and the Black Maternal Health Momnibus Act while in the Senate, as directly impacting the administration’s work today.

“The way she approaches this problem is comprehensive, but also has always pushed for more immediate action,” a senior administration official said. “It’s no surprise that her first year in office, this has been a through line throughout her time here.”

The official added that leading up to the summit, members of the administration have kept up a steady pace of behind-the-scenes meetings on the issue — at the vice president’s direction. And they cited a number of other White House officials like Susan Rice, director of the Domestic Policy Council, and Jennifer Klein, Gender Policy Council co-chair, among those who have helped shape administration efforts.

Those efforts, which Harris will announce Tuesday, include a Department of Health and Human Services report that shows the positive impact for mothers if states expand their Medicaid postpartum coverage to 12 months. Also included is new guidance from the Centers for Medicare & Medicaid Services to help states provide that expanded Medicaid coverage and a proposal from the agency to establish “Birthing-Friendly” designations at hospitals.

Harris will also announce that more than 20 public and private companies have made a commitment around maternal health day, to aid in the administration’s mission. The commitments range from the Association of American Medical Colleges that will hold a nationwide incubator day in May, to CVS Pharmacy which will announce a near $1.8 million investment in new maternal health initiatives to Pampers which will double their implicit bias training program for maternal healthcare staff, according to an additional fact sheet.

“It’s been important to her to bring and convene both the public and private sector in and use the power of the White House to help move this issue forward,” the senior administration official added.

But a key pillar of the administration’s rollout on Tuesday is centered on money it doesn’t yet have. A fact sheet from the administration focuses on the investments written into the House-passed version of the President’s massive social safety expansion package. The bill, which is stalled in the Senate, would provide a historic $3 billion investment in maternal health aimed at diversifying the perinatal workforce and improving data collection among other initiatives.

“I’m so encouraged that we’re going to have a first ever maternal health day of action,” said Katy Kozhimannil, a health care policy professor at the University of Minnesota, who has shared researched with Harris’ vice presidential staff on maternal health and advised her former Senate staff on legislation.

Kozhimannil said she would like to see a “commitment of resources” at the community level, geared toward changing systems that foster structural racism in maternal health.

“We know that racism is the unequal distribution of resources and opportunities unfairly based on race and that saps the vitality of a whole community,” she said. “So we need to really change the systems. And that is work that will continue beyond any investment and I definitely hope we don’t just see another day where we all come together, cite the statistics that we’ve all heard many times. Moms are dying, and every time we lose a mother, we lose a cherished family member, parent, loved one, friend, sister, and that every one more is too much.”

Sotomayor and Gorsuch say they are ‘warm colleagues and friends’ amid...