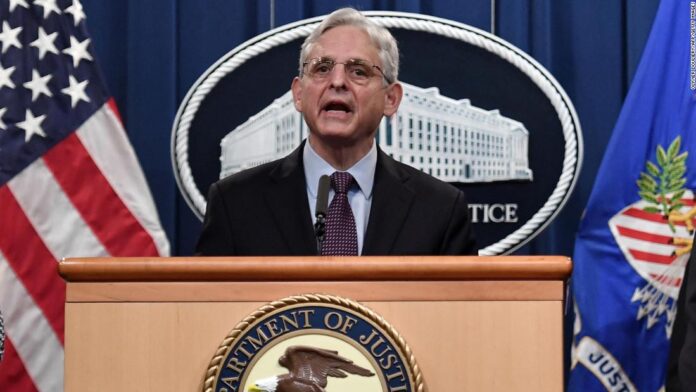 The lawsuit alleges that the redistricting plan drawn by Texas lawmakers violates the Voting Rights Act.

“The complaint we filed today alleges that Texas has violated Section Two by creating redistricting plans that deny or bridge the rights of Latino and Black voters to vote on account of their race, color or membership in a language-minority group,” Attorney General Merrick Garland said at a news conference.

The lawsuit targets both the US congressional map drawn for the next decade of elections and the plan for the state House.

“The Legislature refused to recognize the State’s growing minority electorate,” the lawsuit states. “Although the Texas Congressional delegation expanded from 36 to 38 seats, Texas designed the two new seats to have Anglo voting majorities.”

After the 2020 census, Texas was awarded two additional seats in the US House of Representatives. The population growth that created the new seats was propelled by minority communities, with people of color making up 95% of the growth, according to census data.

“However, Texas has designed both of those new seats to have White voting majorities,” said Associate Attorney General Vanita Gupta. “Instead, our investigation determined that Texas’ redistricting plans will dilute the increased minority voting strength that should have developed from these significant demographic shifts.”

It is the second voting rights-related lawsuit the Biden administration has filed against the state this year. The Justice Department has also challenged restrictive voting measures passed by the legislature earlier this year.

The new lawsuit alleges that in drawing the US congressional map, Texas “intentionally eliminated a Latino electoral opportunity in Congressional District 23, a West Texas district where courts had identified Voting Rights Act violations during the previous two redistricting cycles.”
According to the lawsuit, Texas “failed to draw a seat encompassing the growing Latino electorate in Harris County” and “excised minority communities from the core of the Dallas-Fort Worth Metroplex.”

“Texas also eliminated Latino electoral opportunities in the State House plan through manipulation or outright elimination of districts where Latino communities previously had elected their preferred candidates,” says the lawsuit, filed in the Western District of Texas.

Texas is already facing several private lawsuits challenging its new maps, which were signed into law in October by Gov. Greg Abbott after the GOP-controlled Legislature approved them.

A spokesperson for Texas Secretary of State John Scott, who is a defendant in the lawsuit, declined to comment. In a tweet, the office of Attorney General Ken Paxton called the lawsuit “absurd” and said it was the “Biden Administration’s latest ploy to control Texas voters.”

“I am confident that our legislature’s redistricting decisions will be proven lawful, and this preposterous attempt to sway democracy will fail,” the attorney general’s office said.

In decades past, Texas would have been required, under the Voting Rights Act, to obtain federal approval — either from the Justice Department or a federal court — before implementing new legislative maps.

That requirement, known as preclearance, was gutted in the 2013 Supreme Court decision Shelby County v. Holder. Without it, the Justice Department is challenging the new maps under a separate provision of the law that will put the burden on the department to prove that the maps are discriminatory.

Texas is no stranger to litigation about its line-drawing. It sought the approval of a federal court for the maps it drew in 2010, in what became a legal fight that stretched throughout most of the decade.

Garland on Monday noted the absence of the preclearance requirement and the impact its absence had on the department’s voting rights enforcement efforts, by depriving it of an opportunity to review new maps before they go into effect.

“I want to, again, urge Congress to restore the Justice Department’s preclearance authority where that preclearance tool is still in place. We would likely not be here today announcing this complaint,” Garland said.

Biden administration has made little progress towards goal of closing notorious...