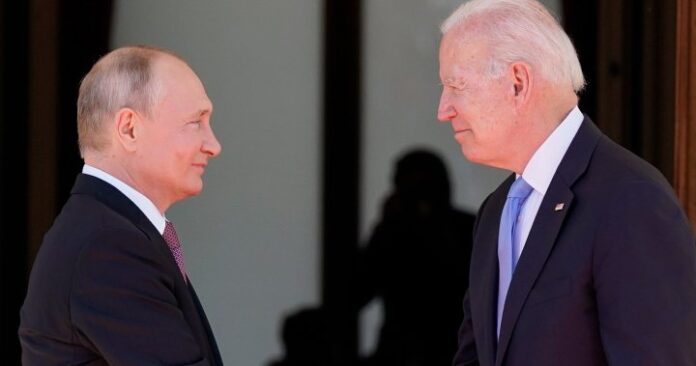 Biden and Putin are to hold a video call on Tuesday as the United States tries to head off Russia from launching military action against Ukraine after Moscow massed tens of thousands of troops on the Ukraine border.

Biden spoke to the leaders of France, Germany, Italy and Britain ahead of the call on Monday, discussing their “shared concern about the Russian military build-up on Ukraine’s borders and Russia’s increasingly harsh rhetoric.” They also called on Russia to de-escalate tensions. The official, in a briefing to reporters, said the United States has been working with European allies about a strong response should an invasion go forward. He added that the United States and Europe would impose severe economic pain.

If Russia invades Ukraine, U.S. payback could be all about money

“We believe there is a way forward to allow us to send a clear message to Russia that there will be enduring and meaningful costs” should an invasion take place, the official said.

Russia has dismissed U.S. media reports about a possible Russian attack on Ukraine, accusing Washington of trying to aggravate the situation while blaming Moscow.

Zelenskiy said in a tweet that he and Blinken agreed to continue “joint and concerted action.”

1:46
Biden to address Russia-Ukraine tensions in talk with Putin

Biden to address Russia-Ukraine tensions in talk with Putin

Russia has a potential diplomatic off-ramp through the Minsk agreement if it wishes, the official said. This is a previously negotiated agreement aimed at ending war in the Donbas region of Ukraine.

“We’re encouraging Russia to return to dialogue through diplomatic avenues,” the official said, without detailing the economic sanctions that are ready to be imposed.

But a source familiar with the situation said targeting Putin’s inner circle with sanctions had been discussed and no decision had been made. The person added that Biden was not expected to get deep into details of the potential actions with Putin but instead would warn of economic costs.

Another person familiar with the situation said sanctions against Russia’s biggest banks were also being considered by the United States and its European allies. Another option was going after Russia’s ability to convert rubles into dollars and other currencies, the source said.

CNN and the New York Times reported the United States could include the extreme step of disconnecting Russia from the SWIFT international payment system used by banks around the world.

Bloomberg reported that the U.S. and European allies are weighing sanctions targeting the Russian Direct Investment Fund as well as the country’s ability to convert rubles for dollars and other foreign currencies should Putin invade Ukraine.

The U.S. could also restrict the ability of investors to buy Russian debt on the secondary market, Bloomberg added, citing people familiar with the matter.

More than 94,000 Russian troops are believed to be massed near Ukraine’s borders. Ukraine Defense Minister Oleksii Reznikov said on Friday that Moscow may be planning a large-scale military offensive at the end of January, citing intelligence reports.

The U.S. official said it was still unclear whether Putin had made a final decision to launch an invasion.

The United States does not seek conflict with Russia but when necessary will impose meaningful consequences for harmful actions, the official added.

CIA Director William Burns said that while Putin’s intentions were not clear, he would never underestimate the Russian leader’s “risk appetite.”

“What we do know is that he is putting the Russian military, the Russian security services in a place where they could act in a pretty sweeping way,” Burns said at a Wall Street Journal event.

Russia has said it can move troops around on Russian territory as it sees fit and that they pose no external threat.

Ukraine’s ties with Russia collapsed in 2014 after Moscow-backed forces seized Ukraine’s Crimean Peninsula, which Kyiv wants back. Kyiv says some 14,000 people have been killed in fighting since then.

Since the latest crisis started, Moscow has set out demands for legally binding security guarantees from the West that NATO will not admit Ukraine as a member or deploy missile systems there to target Russia.

World meals costs fell in June for the primary time in...

Florida apartment collapse: What we all know concerning the constructing, search...