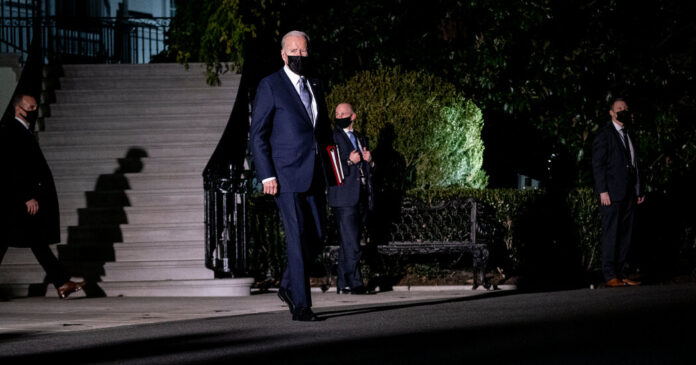 President Biden spoke with President Vladimir V. Putin of Russia in a high-stakes diplomatic effort on Tuesday morning to de-escalate a crisis over Ukraine as tens of thousands of Russian troops amass along the Ukrainian border, raising fears of an invasion.

The White House said that Mr. Biden would “reaffirm the United States’ support for the sovereignty and territorial integrity of Ukraine.” The two began their conversation via video-link at 10:07 a.m., according to the White House, and it ended at 12:08 p.m.

“Greetings, Mr. President!” Mr. Putin said at the start of the call, according to a brief video of the opening moments.

“Good to see you again,” Mr. Biden responded warmly, after what appeared to be a brief connection glitch. “Unfortunately last time we didn’t get to see one another at the G20. I am hoping next time we meet we do it in person.”

Mr. Putin was seated at a long wooden desk, with Mr. Biden on a large video screen in front of him, and waved to Mr. Biden as the call began, according to brief footage of the videoconference released by Russian state television. Mr. Putin took the call from his residence in Sochi, the Russian resort city on the Black Sea.

The virtual meeting was a crucial test for Mr. Biden, as he tried to protect a democratic ally whose security U.S. officials have promised to defend and head off a major European security crisis.

Mr. Putin has complained that Ukraine poses a threat to Russia through its close military and political ties to the United States and European powers.

But Mr. Biden’s options are limited. He has no desire to send U.S. troops into battle on Ukraine’s behalf. Instead, Mr. Biden was to use the call to warn Mr. Putin of potentially severe economic consequences, according to a senior administration official who briefed reporters on Monday. The official would not offer details, but analysts say a full-fledged invasion could trigger a U.S. move to cut Russia off from the international financial system, a drastic measure reserved for extreme cases.

It is unclear, however, whether such warnings will deter the Russian president, who has weathered years of Western sanctions over past acts of aggression, including Mr. Putin’s 2014 annexation of Ukraine’s Crimean Peninsula and his longtime support for a pro-Russian separatist insurgency in Ukraine’s east.

U.S. officials believe that Mr. Putin has not decided whether to invade Ukraine. But the United States has disclosed intelligence showing that Russia’s military has developed a war plan that envisions as many as 175,000 troops pouring across Ukraine’s border — an invasion force that Ukraine’s military, despite U.S.-provided equipment and training, would have little ability to stop.

Prior to the call, Biden officials said the leaders would also cover other issues, as they did when meeting in Geneva in June, including nuclear arms control, cybersecurity and Iran’s nuclear program.

An astronaut’s view on protecting the Earth

War May Loom, but Are There Offramps?

‘Here We Go’: Behind the Curtain with Soccer’s Prophet of the Deal

Europe’s Pandemic Assist Is Winding Down. Is Now the Greatest Time?