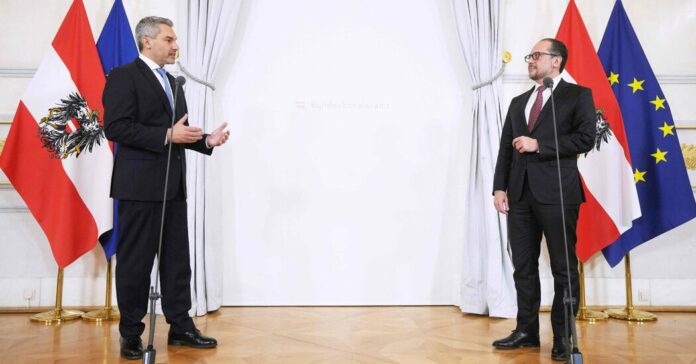 Austria swore in a new chancellor, Karl Nehammer, on Monday, the third person in two months to take up the position after a corruption scandal jolted the country’s politics.

Mr. Nehammer, 49, formerly the country’s interior minister, was sworn in by President Alexander Van der Bellen in a ceremony at the Hofburg palace in Vienna after he assumed leadership of the governing Austrian People’s Party.

“I will approach my office as chancellor with great seriousness and respect,” Mr. Nehammer said after the ceremony. “Because there is an incredible amount to do.”

His rise to chancellor capped months of unusual chaos in Austrian politics, sparked by the resignation of Sebastian Kurz as the country’s leader in October amid a criminal investigation into allegations of corruption and buying influence. He stepped down weeks later as head of the conservative governing party.

Mr. Kurz’s successor, Alexander Schallenberg, a former diplomat and foreign ministry spokesman, was widely seen as a place-holder for Mr. Kurz. But on Thursday, hours after Mr. Kurz announced he was officially leaving politics and in turn the party leadership, Mr. Schallenberg said he would also step down so the country could also be led by the chief of the Austrian People’s Party.

Mr. Schallenberg will be foreign minister in the new government, a position he had held in the Kurz administration.

“It’s been quite a ride,” said Laurenz Ennser-Jedenastik, an assistant professor of political science at the University of Vienna. He said it was still unclear whether the last few months were a “blip on the timeline,” or whether such instability was the new normal for Austrian politics.

The upheaval, he said, reflected in part the concentration of power in the party’s leadership, in particular Mr. Kurz, who first served as chancellor four years ago. Positioning himself as a young, media-savvy political star, Mr. Kurz’s support of anti-immigrant views drew more supporters to the center-right movement in Austria.

But after he was accused of using public funds for corrupt purposes, the party he helped invigorate ultimately decided to stop backing him. Now, the question is whether the party could address a decline in public support in recent months.

“Can the new leadership fill the power vacuum to keep the party stable or does it produce upheaval?” Mr. Ennser-Jedenastik said.

Mr. Van der Bellen, the president, alluded during the ceremony Monday to the need to regain the public’s trust in politics. “What is always needed is to come clean to the population,” and “make fact-based decisions,” he said.

As interior minister, a position he took on in 2020, he was known for his hard-line policies on immigration and law and order, in line with the Kurz administration. But Mr. Nehammer, a former military officer, has also spoken out about the danger of right-ring extremism and Covid skepticism, and has warned people to abide by coronavirus restrictions.

The change in leadership comes during a particularly fraught time for the Austria, the first European country to announce a national lockdown ahead of this winter in response to a surge of virus cases.

“People will certainly hope for a somewhat stable government that will not keep them busy watching out for new chancellors all the time,” said Mr. Ennser-Jedenastik.

The Trump administration was a ‘troublesome time’ for Ukraine, says overseas...