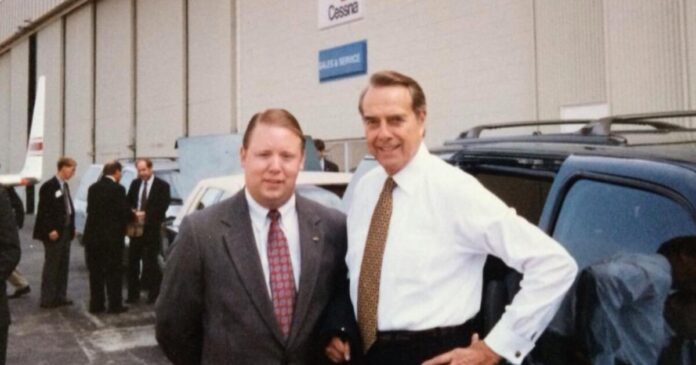 GRAND RAPIDS, Mich. — In 1996, a campaign coordinator gave Scott Greenlee, a then-28-year-old volunteer with the Kent County Republican Party, an assignment of a lifetime. His mission? Drive Republican presidential candidate Bob Dole around while he campaigned in West Michigan.

“It was exciting. Certainly nerve-wracking getting behind the wheel and recognizing the Senate Majority Leader was in my car, who was going to be the nominee of our party for president. Definitely was driving very slow, using my blinkers, looking both ways twice, you know really trying to be safe,” Greenlee said in an interview with FOX 17 Sunday.

In 1996, Bob Dole was about as big of name in American politics as there was.

His life story of surviving a near-deadly explosion while fighting the Axis powers in Italy during World War II, to becoming a stalwart of the U.S. Senate was something out of a movie. Though those who met him say, he never acted like it.

“Just a very nice guy, a very down to earth guy. Certainly, he was immensely powerful and yet you wouldn’t have known it,” explained Greenlee, who now works as political consultant in the state.

Greenlee picked up Dole at the airport and had the pleasure of spending the day with him, chauffeuring him to many spots in West Michigan, from Robinette’s Apple Haus (a classic stop for many politicians) to the Kent County Republican Party headquarters.

While he was a Kansan, Dole was very familiar with West Michigan, “he didn’t need to be briefed or brought up to speed on anything,” says Greenlee. Most likely due to Dole’s longstanding friendship with former President Gerald Ford. Dole was his running mate in 1976, when Ford lost his reelection bid.

“When I look at Bob Dole and my interactions with him, I see an awful lot of Gerald Ford,” says Greenlee.

“He was very accommodating, he wasn’t one of these people who was very tight on you know, we’ve got 10 minutes for photos here and then I’ve got to move on. He was taking his time and meeting everybody that he could and really interacting,” he added.

On the road, Greenlee says he and Dole talked about baseball, politics and what the senator thought was crucial for the Republican Party.

“He said then, which is still true today; we need more young people to get involved,” says Greenlee “He started the day with that and ended with that.”

“When we got him back to the airport, he just shook my hand and said he’s thankful, he was gracious and said I want to keep you involved, I want to make sure I you see at upcoming events when I’m back here in Michigan,”

As he remembered Greenlee at those future events in the years to come, generations will remember Senator Bob Dole for his 79 years of leadership and service. Dole passed away Sunday at the age of 98.

His mark has been permanently left in West Michigan. A “FORD-DOLE” campaign sign from the 1976 race still hangs across the wall of the Kent County GOP and in 2003 the Battle Creek federal building where Dole was treated for years for his near-fatal war wounds, was renamed in his honor.

“He was such a good guy and that’s why you see people from all across the political aisles, mourning the loss of a great American today,” Greenlee said.

“He’s certainly somebody that you would read about, and you’d observe on national TV shows, brokering deals and,working to encourage people to get things done,.to meet in the middle when we needed to, to move America forward,” added Greenlee.

“Whether it was 100% on his side, or 100% on the other side, he wasn’t as concerned. He strikes me as the type of politician who just wanted to get things done, who wanted to make things a little better, not necessarily going for the homerun being happy to take a walk and advance, you know, America one base at a time.”

Women Wage Peace to gather for Sukkot rally for peace

In Case Towards Trump’s Firm, Echoes of His Father’s Ways on...