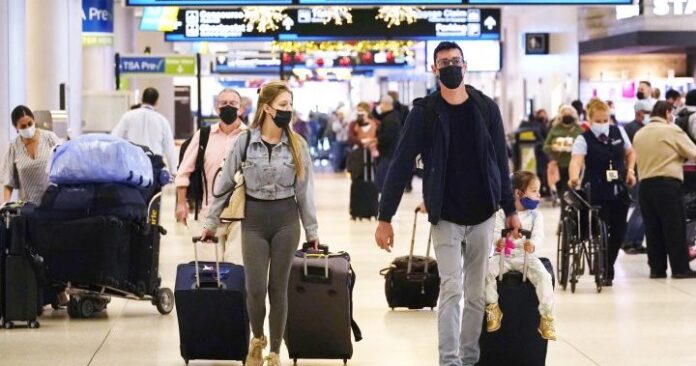 The Biden administration is expected to take steps in the coming days to toughen testing requirements for international travellers to the U.S., including both vaccinated and unvaccinated people, amid the spread of the new Omicron variant of the coronavirus.

The precise testing protocols were still being finalized ahead of a speech by President Joe Biden planned for Thursday on the nation’s plans to control the COVID-19 pandemic during the winter season, according to a senior administration official who said some details could still change.

Among the policies being considered is a requirement that all air travelers to the U.S. be tested for COVID-19 within a day of boarding their flight. Currently those who are fully vaccinated may present a test taken within three days of boarding.

“CDC is evaluating how to make international travel as safe as possible, including pre-departure testing closer to the time of flight and considerations around additional post-arrival testing and self-quarantines,” Centers for Disease Control and Prevention Director Dr. Rochelle Walensky said Tuesday.

The official, who spoke on the condition of anonymity to discuss the administration’s plans before the announcement, said options under consideration also include post-arrival testing requirements or or even self-quarantines.

Under the new measures expected to be announced Thursday, the U.S. would require anyone entering the country to be tested one day before boarding flights, regardless of their vaccination status or country of departure, the Washington Post reported, citing three anonymous federal health officials.

“Administration officials are also considering a requirement that all travelers get retested within three to five days of arrival,” the report said.

The expected move comes just weeks after the U.S. largely reopened its borders to fully vaccinated foreign travelers on Nov. 8.

Much remains unknown about the new variant, which has been identified in more than 20 countries but not yet in the U.S., including whether it is more contagious, whether it makes people more seriously ill, and whether it can thwart the vaccine.

Dr. Anthony Fauci, the top U.S. infectious disease expert, said more would be known about the omicron strain in two to four weeks as scientists grow and test lab samples of the virus.

As he sought to quell public concern about the new variant, Biden said that in his Thursday remarks, “I’ll be putting forward a detailed strategy outlining how we’re going to fight COVID this winter — not with shutdowns or lockdowns but with more widespread vaccinations, boosters, testing, and more.”

Asked by reporters if he would consult with allies about any changes in travel rules, given that former President Donald Trump had caught world leaders by surprise, Biden said: “Unlike Trump I don’t shock our allies.”

On Tuesday, Canada tightened its own travel restrictions in response to the Omicron variant. Under the new measures, anyone arriving by air from all countries except the United States will have to take a COVID-19 test upon arrival, Health Minister Jean-Yves Duclos said.

Calgary’s Inexperienced Line committee will get detailed take a look at...

Roman Protasevich: A Belarus Activist Who ‘Refused to Reside in Concern’