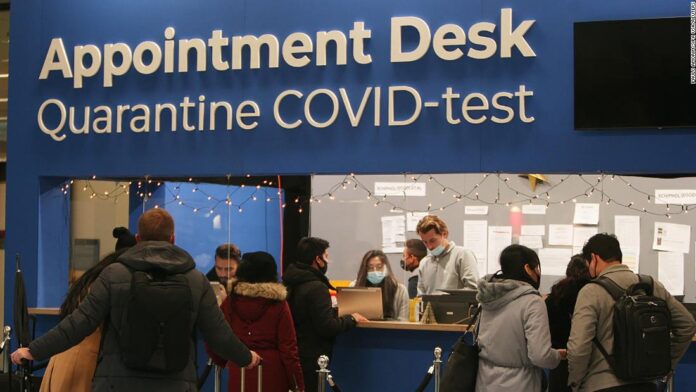 The Omicron variant was confirmed in two test samples taken on November 19 and November 23, the National Institute for Public Health and the Environment (RIVM) said on Tuesday.

RIVM virologist Chantal Reusken told national broadcaster NOS that one of the people had “probably contracted the virus in the Netherlands. How exactly is still under investigation.”

Dutch authorities previously believed that the first cases of the Omicron variant had arrived on November 26 after 14 passengers on flights from Johannesburg and Capetown tested positive.

Omicron, also known as B.1.1.529, has an unusually high number of mutations, sparking fears that it could evade vaccines and prolong the pandemic.

The two newly discovered cases in the Netherlands takes the total number of confirmed Omicron cases in the country to 16, the RIVM said. At least 20 countries and territories have confirmed cases of the Omicron variant so far, with the latest being Brazil.

At least 70 countries, among them the United States, imposed new travel restrictions from several African countries after Omicron was first identified by South African scientists.

But many health experts have pushed back on the reasoning behind the bans, with studies showing that travel restrictions may only slow the introduction of a new virus or variant by a few weeks.

The World Health Organization has repeatedly expressed fears that travel bans hurt economies and discourage countries from being forthright about reporting new viruses or variants.

On Tuesday, the WHO again urged countries to avoid implementing knee-jerk travel bans, saying that they do not “prevent the international spread,” and “place a heavy burden on lives and livelihoods.”

“Putting in place travel bans that target Africa attacks global solidarity,” WHO Regional Director for Africa Matshidiso Moeti said Sunday. “Covid-19 constantly exploits our divisions. We will only get the better of the virus if we work together for solutions.”

Mourinho, Benítez and the Pursuit of the Past