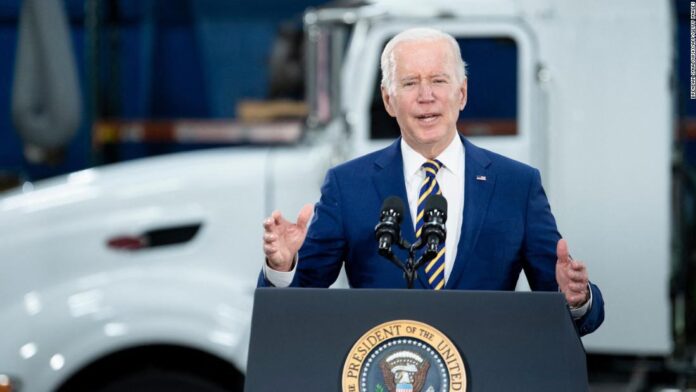 The President first visited a two-year community college in Rosemount, Minnesota, called Dakota County Technical College, to make the case for his infrastructure law, which he has stressed will create jobs that will not require a four-year college degree.

In a speech following the tour, Biden focused on how the infrastructure law will create jobs, deliver tangible results for communities and make America more competitive in the 21st century.

He specifically highlighted how the law will fund the state’s lead pipe replacements, improve broadband access for Minnesotans, and improve the state’s roads and bridges.

“This law makes significant investments in our roads and bridges — the largest investment in nearly 70 years. … So many of the 661 bridges, nearly 5,000 miles of highway here in Minnesota, just Minnesota, that are in poor condition,” Biden said. “Those decaying roads cost Minnesota drivers and extra $543 in gas, repairs and longer commute times. Every family.”

“We know about our infrastructure problems. We’ve known about them for a long time. Now we’re finally doing something about it. No more talking. Time for action,” Biden said.

Biden reiterated during his speech that the emerging Omicron variant of Covid-19 “is a cause of concern, but not a cause to panic.”

“Here’s what this is all about, rebuilding America … and we’re doing it as we continue to battle a pandemic,” Biden said. “We’re going to keep fighting through this with every tool we have, as we did with the original virus and the Delta … variant. And we’re also going to keep our historical economic growth moving.”

The Minnesota speech kicked off a nationwide tour to promote the new infrastructure law.

Biden, Vice President Kamala Harris, Cabinet members and senior administration officials will travel across the country to communicate what is in the law and how it will help Americans.

One White House official told CNN that part of the focus of the nationwide tour the President and other top Biden administration officials are embarking on is to showcase how the administration will “hit the ground running to make sure the impact of these investments are delivered on task, on time, and on budget.”

“The tour will emphasize that the Biden-Harris Administration will collaborate with federal, state, and local partners across public and private sectors to operate as one team with one mission: Work together to deliver concrete results and get the job done for the American people,” the official said.

The President and Democrats in Congress are hoping Americans will see tangible benefits from the law ahead of next year’s midterm elections. Biden has tapped former New Orleans Mayor Mitch Landrieu to oversee the implementation of the roughly $1 trillion law. Landrieu’s appointment underscores just how much of a heavy lift it will be to enact the legislation.

As the infrastructure law gets implemented, the President and congressional Democrats are looking to pass the second part of Biden’s domestic agenda: a large-scale economic and climate spending package.

After months of negotiations, the House passed the Democrats’ $1.9 trillion budget reconciliation package earlier this month. The bill would transform the nation’s social safety net and includes funding for a universal pre-K program, expanded child care, beefed-up subsidies on the Affordable Care Act exchanges through 2025, significant investments to combat the climate crisis and much more.

The legislation’s path in the Senate remains uncertain, and more revisions to the bill are expected.

The epic standoff that created the 60-vote Senate

Passenger Exposed Buttocks and Threw a Can During Flight, Prosecutors Say

Editorial: Biden freezes billions in funding to punish California for an...