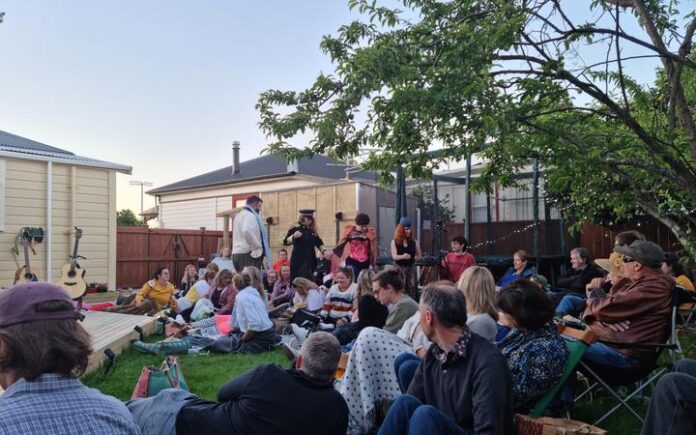 With Covid-19 restrictions impacting events around the country, a Nelson-based actor is bringing live theatre to the people. 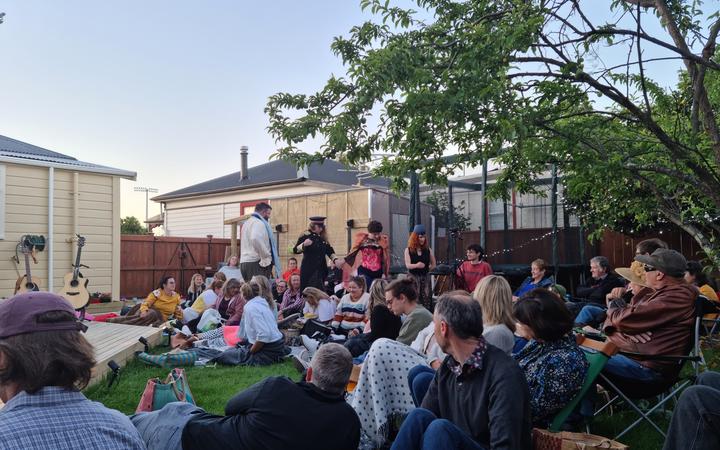 Cast members of A Midsummer Night’s Dream follow Puck through the crowd during a backyard show in Nelson.
Photo: Samantha Gee

A small troupe of actors are performing A Midsummer Night’s Dream in gardens and backyards across the top of the South Island, in what director Laura Irish has called The Barden Party.

It’s been so popular that the group has requests to take the show to Auckland, Wellington and Christchurch.

Irish said the idea for the Barden Party was born after yet another event in Nelson was cancelled due to Covid-19 restrictions.

“I was standing on my deck with one of my friends who’s an actor and also a landscaper so he had built the deck and I said to him, ‘Scott, this is bigger than most stages we’ve performed on’.

“Then I just kind of got the idea and I said to my husband, ‘what if I directed a show that we could just take to people’s gardens?'”

She said in an industry constantly threatened by venue closures and event cancellations, actors had been forced out of the profession or faced with trying to find new ways to make a living.

“What are we supposed to do when our institutions aren’t there for us? We have to come up with new ways of getting paid.”

Passionate about the arts, Irish is the former artistic director of Ghost Light Theatre, the Nelson Fringe Festival and The People’s Republic of Improv.

Covid-19 also thwarted her plans to move to Los Angeles last year for work, which led her to think about the next project.

“I thought, what can I keep doing here that’s innovative and different and I’m a sucker for creating art start-ups unfortunately so this is my newest invention.

“It’s kind of a throwback to how troubadours and theatre used to be, this is kind of how it would have been done 300 years ago.”

Irish said most backyards could only hold up to 50 people, they were private spaces and not venues that could be closed and were easier to manage.

“I also think it’s really important, in these times especially, that we have arts available to everyone ao we tried to make it as accessible as possible for people to hold a Barden Party.

A Shakespeare aficionado, Irish plays Puck, the mischeivous sprite who delights in playing pranks on both his cast members and the unsuspecting audience.

Irish chose A Midsummer Night’s Dream partly because she knew the play so well, but also because it was joyful and full of fun.

Nearly half of it is written in rhyme which Irish said makes it inherently musical. Popular songs have been reworked with a folk twist and woven throughout, with the odd kazoo accompaniment.

The cast have 30 shows booked across the top of the South Island and have a grant to take the play to Dunedin, in March, with requests to perform in other parts of the country too. Irish hopes the show will be able to continue for as long as they can sustain it.

There isn’t a fixed cost, with guests encouraged to pay between $20 to $30 each, so the actors can take home a fair wage after expenses, travel and admin costs.

Aimèe Borlase, who plays fairy Titania and Queen Hippolyta, was in the cast for a show that was cancelled when Irish asked her to join The Barden Party.

“I really love the challenge of being in a different space each time you perform so for me as an actor, it’s really exciting and then the fact that we’re able to then bring that to people, even under different Covid levels.

Shows can be booked through The Barden Party Facebook page.

Covid-19 replace 6 August: One new case, one historic case in...