Police commissioner Andrew Coster says it is too early to say whether the West Auckland shooting today is gang related.

Watch the news briefing back here:

Police Commissioner Andrew Coster said police have had to deal with serious events over the past 24 hours, including a West Auckland shooting today and an officer being struck by a fleeing vehicle last night while deploying road spikes in New Lynn.

A man has died after the shooting with police in West Auckland, and there are now four officers in hospital as a result of both incidents. Two have serious injuries.

In regards to today’s shooting, Coster said police were called to the address at 8.17am on Danube Lane in Glen Eden after reports of a house fire and a man discharging a firearm.

The house was engulfed in flames when police arrived.

They tried to engage the man to disarm over 30 minutes but he became increasingly agitated and aggressive, he said.

Residents of neighbouring properties were evacuated, he said. A police dog and “distraction devices” were also deployed.

“The situation escalated further when the man fired at police and officers returned fire, incapacitating him,” Coster said.

“Our staff delivered first aid to the man, but tragically, he died at the scene.

“Our people come to work everyday to keep people safe and this is the last thing we want.”

Two officers suffered moderate injuries and a third officer has more serious injuries but is stable and undergoing surgery.

The injuries officers sustained were on parts of their body not covered by body armour.

Coster said when he heard multiple officers had been injured; “my heart sank, it is not what we want for our people.”

The staff involved directly today were from the Armed Offender Squad.

The man who died is still being formally identified by police and next of kin are being notified.

Coster said there was nothing to suggest today’s incident was gang related but it was still early days to determine that.

Police now have a critical incident investigation underway, and the Independent Police Conduct Authority and WorkSafe have been notified.

“We’re trying to piece together the man’s actions today and understand how events unfolded,” Coster said.

He said these events reflect the level of tensions in some communities.

“This has been a very challenging time for staff particularly in this district.”

Police were concerned about the increase in violence and they were actively working on this, he said.

In Monday’s post-Cabinet briefing, Prime Minister Jacinda Ardern said had not yet had a chance to be briefed on the incident.

“We have taken action to try and reduce down the access and nature of firearms that are being accessed in the wider community.

“You’ll see that we’ve moved on licensing, we’ve removed those weapons that are military-style and for the most part when in the hands of the criminal fraternity and designed to cause mass devastation.”

They will continue to focus on firearms access and support police in their work, she said. 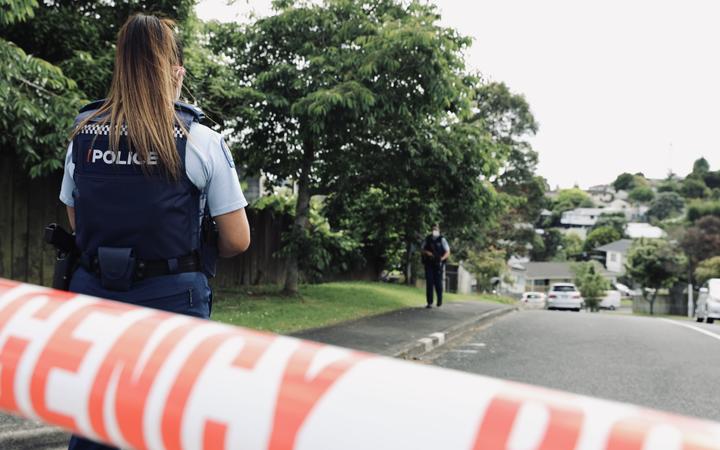 Police at the scene in West Auckland this morning.
Photo: RNZ / Marika Khabazi

Regarding the event last night on Great North Road in New Lynn, Coster said police responded to a burglary call at about 11pm.

“Staff in the area noticed a suspicious vehicle which did not stop when signalled to pull over. Police did not pursue the vehicle but another police unit deployed spikes before the fleeing vehicle at the intersection of Fruitvale Road and Great North Road.”

This was about 1.5km away from where the burglary took place, he said.

About 11.10pm, the fleeing vehicle struck the officer that deployed the spikes.

“In a cowardly act, this driver did not stop to render assistance and the officer sustained serious injuries.”

The car then crashed into a power transformer a short time later and the people in the car fled the scene.

The officer has undergone surgery today and is doing well, Coster said.

‘For These I Love’ Units Unhappy Tales to Digital Beats