The prime minister has announced which regions will be joining Auckland in red this Friday, Tairāwhiti iwi are urging Rhythm and Vines to cancel, and experts say more information is needed on the new Covid-19 variant. 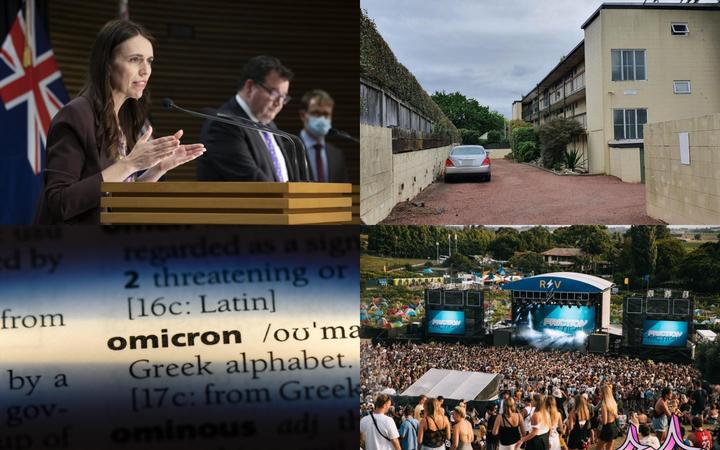 The prime minister has announced which regions will move into red and which into orange as the new traffic light system comes in on Friday.

Ardern confirmed that all of Northland would join the Auckland region in red, along with Taupō, Rotorua Lakes, Kawerau, Whakatāne, Ōpōtiki, Gisborne, Wairoa, Rangitīkei, Whanganui and Ruapehu districts.

All other regions would be in orange.

“At orange, the big change here for parts of the country which will enter into this setting is that for the vaccinated and where vaccine passes are used, there are no gathering limits,” Ardern said.

“People can gather again safely. At red, it will feel a lot like level 2. Your vaccine pass lets you go everywhere but number limits of 100 will apply to most activities.”

For Aucklanders, the changes meant they would be able to see family and friends indoors again. 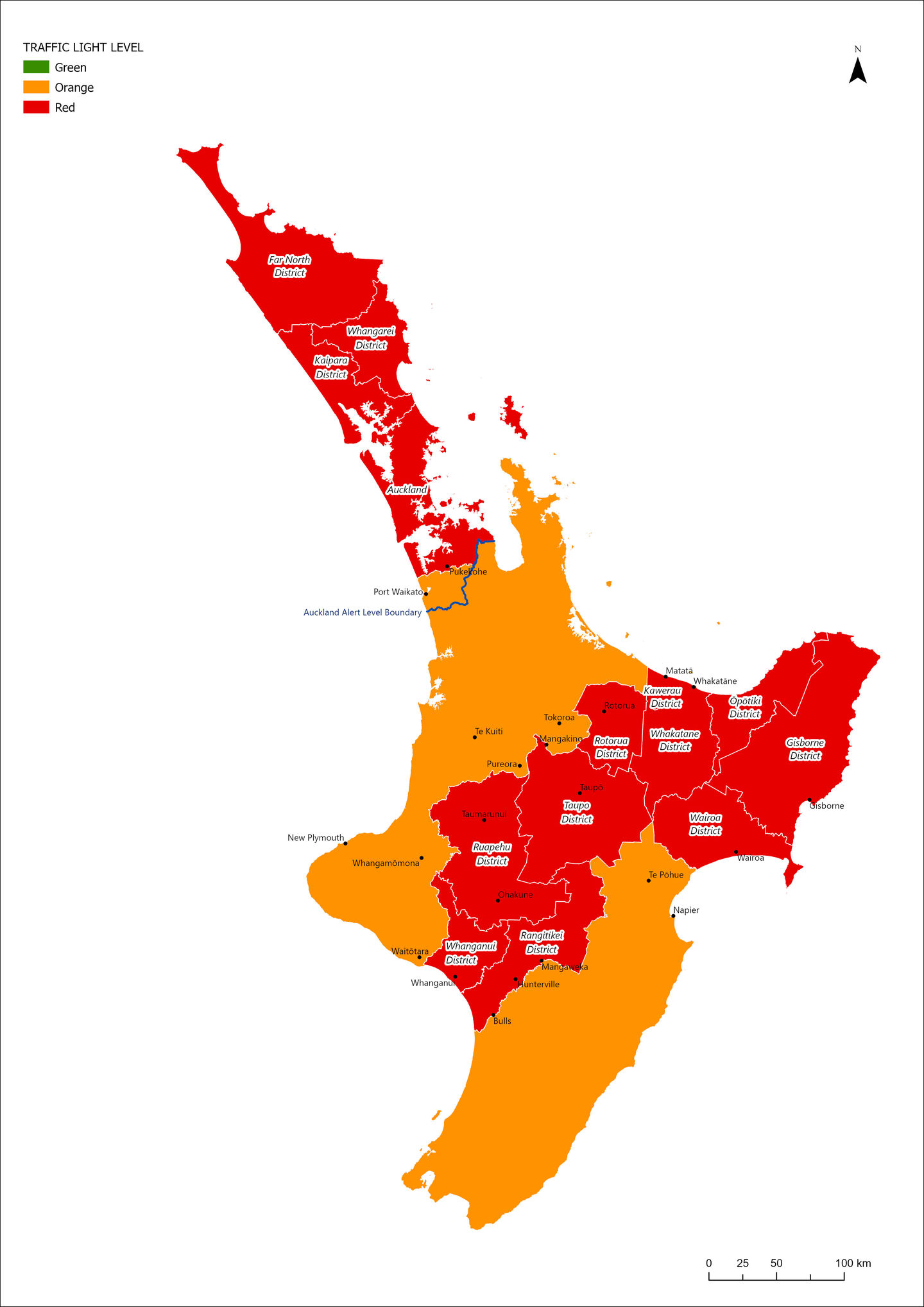 The world may not learn the true level of threat posed by the new Omicron variant of Covid-19 for several weeks, says a University of Otago scientist.

“I think it’s right to be concerned at this moment, but we need to know more.”

Institute of Environmental Science and Research principal scientist of genomics professor Mike Bunce told Morning Report the country was well-placed to deal with the new threat but it was important to maintain border protections to “buy us time”.

At the weekend, the government moved nine countries into the very high risk category, restricting travel from those countries to New Zealand citizens only and requiring a full 14 days in MIQ.

“If we see more widespread cases in those countries then we will consider whether they need to be classified as very high risk countries,” said Prime Minister Jacinda Ardern. 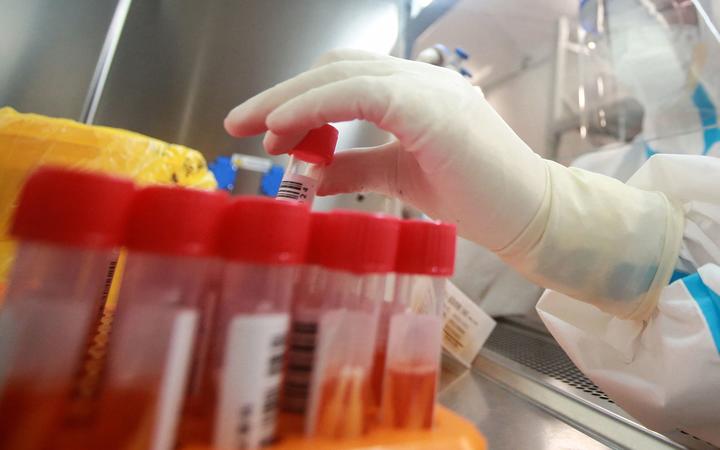 (File image) There are no cases of the Omicron variant in the New Zealand yet.
Photo: AFP

Omicron does not change the advice on vaccine boosters, which are now available to anyone who had their second dose six months ago, she said.

A group of kaumātua in Auckland were among the first in the country to receive their booster doses on Monday morning.

There is yet to be any cases of Omicron identified in the country.

A review into two separate positive Covid-19 cases, who were living alone and self-isolating and then died, has been released It found their deaths were potentially preventable.

The report was initiated by the Northern Region Health Coordination Centre (NRHCC) in consultation with the Ministry of Health following the first death on 3 November. The second death followed two days after. 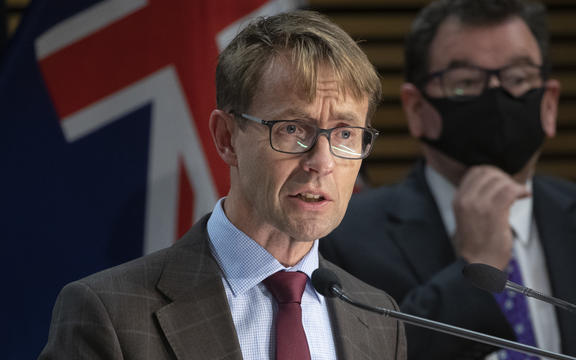 In the post-Cabinet update Director-General of Health Ashley Bloomfield said with home isolation there will still be regular contact from healthline and public health, with very active follow-up.

Bloomfield said “the point of doing the review was to find out exactly where were the areas that needed to be strengthened and improved, and those improvements have been put in place.”

to cancel this year’s festival over concerns it could cause a Covid-19 outbreak] in the region.

The Tairāwhiti DHB, which includes Gisborne, has one of the lowest vaccination rates in the country.

The prime minister confirmed this afternoon that Gisborne would be placed in the red setting under the new traffic light system.

Asked her thoughts on the festival, she said the government’s support mechanisms like the insurance scheme are aimed at large events like this.

Concerts like Bay Dreams have already been cancelled due to the uncertainty, others like Toast Martinborough have been postponed. The Bay of Islands festival is also up in the air.

And access to one of the most popular New Year’s Day sunrise spots in the East Cape has been blocked to help prevent the spread of Covid-19.

The 2022 Waka Ama National Sprint Championships has also been cancelled over uncertainty of the roll out of the new Covid-19 protection framework and its impact on Māori.

Te Pūnaha Matatini’s professor Michael Plank said case numbers in Auckland appear to have peaked a few days ago but he warns that the situation could change as the traffic light system is introduced.

“Things are very finely balanced at the moment and so it wouldn’t take much of an increase in contact rate to push the R number above 1 and start to see cases increase again,” he said.

In the post-Cabinet conference, Bloomfield said the plateauing was a good sign and really did reflect the vaccination rates.

“It’s hard to predict exactly what will happen but … the key influence that’s happening here is the vaccination rates and those go up, not down, day by day.”

A particular worry was how the virus will spread among Māori communities with lower vaccination rates, he said. It had the potential to take off and more effort must be made to increase rates.

Epidemiologist Rod Jackson said the push for high rates must continue into the high 90 percent level.

Covid-19 replace: Two new circumstances in MIQ, none in the neighborhood