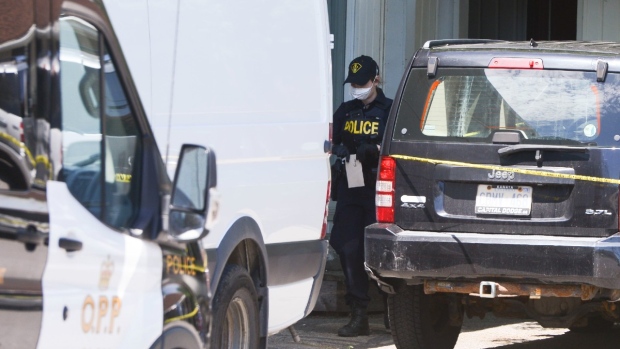 NORTH BAY —
Police in Canada reported more than 740 homicides in 2020 — the most in three decades — in a year that also saw the country experience its worst mass murder in history.

A total of 743 homicides were reported last year, the highest number since 1991 and an increase of 56 homicides compared to 2019.

The figures, detailed in a new report released Thursday by Statistics Canada, used data pulled from the 2020 Homicide Survey, which collects police-reported information on homicide incidents, victims and accused persons in Canada.

The country’s homicide rate edged up seven per cent to 1.95 per 100,000 people, making it the highest national homicide rate in Canada since 2005.

“The COVID-19 pandemic has had profound impacts on Canadian society since March 2020,” the StatCan report said. “These marked societal and economic changes have contributed to a shift in crime patterns across Canada.”

Homicides remain relatively rare in Canada, StatCan noted, making up less than 0.2 per cent of all violent crime in 2020.

Although the country’s homicide rate has steadily increased since 2014, it remains lower than some of the highs recorded in the early 1990s and mid-1970s.

However, last year’s increase comes as the country saw an eight per cent decrease to its Crime Severity Index, which measures the volume and severity of police-reported crime in Canada.

StatCan noted that many victim service providers and advocates have expressed concerns about the impact of pandemic-related lockdown restrictions and stay-at-home orders, with social isolation, reduced income and job losses potentially leading to escalations of violence in the home.

While the number of spousal homicides fell by nine in 2020, StatCan reports that 11 more of the homicides reported were committed by family members and seven more by intimate partners.

Of the 474 solved homicides in Canada where a relationship between the accused and victim was reported, 82 per cent were by someone the victim knew personally.

Only 18 per cent of the homicides were committed by a stranger.

The rise in homicides is largely attributed to increases in Alberta and Nova Scotia.

Alberta saw 39 more homicides in 2020, while Nova Scotia saw an increase of 29, according to StatCan.

This includes the 22 victims of the April 2020 mass shooting that began in Portapique, N.S., and extended overnight to other areas of the province before the gunman was shot and killed by RCMP.

Calgary and Edmonton experienced the largest increases in homicides in Alberta last year, with each city reporting 15 more victims.

Toronto, being the largest city in Canada, had the highest number of homicides in the country at 105, although this was 25 fewer than 2019, making it the largest year-over-year decline among census metropolitan areas (CMAs).

Homicides, overall, rose in 20 of Canada’s 36 CMAs, according to StatCan.

Ontario and Manitoba had the largest declines in homicides with 19 and 10 fewer victims, respectively.

About one in three homicides in Canada last year involved a firearm, of which nearly half were committed with a handgun.

In 2020, police reported a total of 277 firearm-related homicides, up six per cent compared to 2019 and the second year in a row that the rate has risen in Canada.

With the exception of Alberta and Nova Scotia, most provinces saw the number of firearm-related homicides decrease, with no change reported in the territories.

Despite the increase in firearm-related homicides, gang-related homicide saw its largest year-over-year decrease since 2013, falling by nine per cent in 2020 to 148 victims.

The largest declines were in Ontario, Quebec, and Manitoba, with each reporting eight, six, and six fewer gang-related homicides, respectively.

Toronto had 11 fewer gang-related homicides, Montreal 12 fewer and Winnipeg four fewer, according to the data.

StatCan reported that shootings were by far the most common method used in gang-related homicides at more than 78 per cent.

Despite representing about five per cent of the Canadian population, the homicide rate for Indigenous victims was seven times higher compared to non-Indigenous people at a rate of 10.05 per 100,000 population, compared to 1.41.

Indigenous Peoples represented 28 per cent of all homicide victims (201) in Canada last year, according to the data.

Of these homicides, 163 were men, which StatCan noted is an increase of 24 per cent and the highest since 2014 when Indigenous identity first became available through the Homicide Survey. There were nine fewer victims of homicide involving Indigenous women, the first decrease in four years.

“A history of colonization, including residential schools, work camps and forced relocation, profoundly impacted Indigenous communities and families,” according to StatCan’s report.

A total of 179 homicide victims in 2020 were designated as visible minorities, half of whom were identified as Black. Eighty-nine per cent were men and nearly half of these homicides were reported in Ontario, largely in Toronto.

Despite 51 per cent of people in Toronto identifying as visible minorities, they remain overrepresented in homicides accounting for more than two-thirds of victims, according to StatCan.

‘Not getting on a plane any time soon’: Deportation decision delayed in Humboldt Broncos case

Neck-and-neck, not eye-to-eye: F1 down to the wire in thrilling title fight