Farmers’ fields and lifestyle properties near Palmerston North could soon give way to a massive freight yard, the first stage of which could cost more than $1 billion.

KiwiRail’s proposed Regional Freight Hub could open in less than 10 years and the rail operator has plans to handle more than a million tonnes of goods every year, but those living in its path aren’t happy.

KiwiRail has outgrown its decades-old rail yard in Palmerston North and plans to transform 177 hectares of land to the north of the city into a 24-7 operation designed to accommodate trains up to 1.5 kilometres long.

The city is a growing distribution centre for the rest of the North Island and beyond and KiwiRail executive general manager for property Olivia Poulsen said the rail company wanted to climb aboard.

“Palmerston North’s a really key logistics area for the entire central and lower North Island. It deals with freight coming from Taranaki, Napier, Auckland, Tauranga, Wellington and across the Cook Strait,” Poulsen said.

“Rail currently only carries about 10 percent of that freight in and out, so we’re really focused on growing that.”

The proposed yards received $40 million from the Provincial Growth Fund for developing plans and acquiring property.

If it goes ahead, KiwiRail estimated about 2000 people will work onsite, a big jump from the 270 employees at its current yard, which handles about 670,000 tonnes of freight a year.

That was half of what was proposed at the new location. 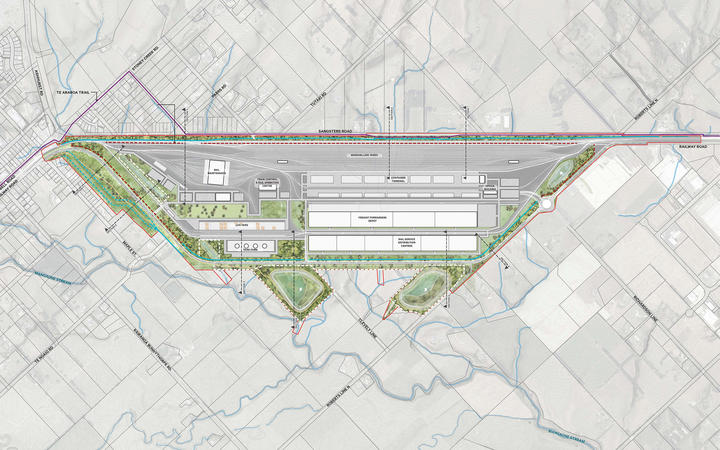 “There’s just no room to extend them,” Poulsen said of the old yards.

“And as freight’s been growing the layout of that yard is quite fragmented. It’s quite long and thin. In terms of how we operate now, it’s very inefficient and it’s just out of capacity.”

The area for the proposed new yard stretches from the Palmerston North Airport industrial zone to the village of Bunnythorpe.

Properties in its path will be acquired under the Public Works Act.

For Hangfeng Ji, Lucy Wang and their family it looks like the end of their rural idyll. Living in cities in China and England before arriving in New Zealand in 2014, they could only imagine living in the countryside, so close to schools and shops. 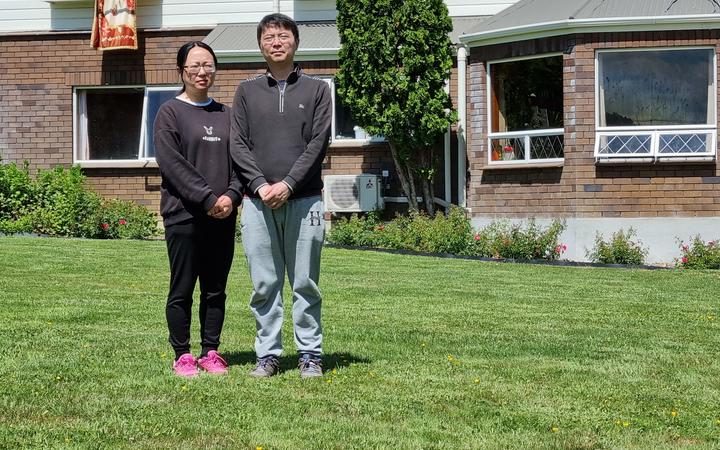 Lucy Wang and Hangfeng Ji stand to lose their house, which will be acquired under the Public Works Act.
Photo: RNZ / Jimmy Ellingham

“I felt my dream that has already come true will disappear, will be destroyed again, so I’m very sad,” Wang said.

Their two-storey house, which they bought about three years ago, accommodates up to nine people across three generations, and has a huge floor area and massive garden used for family and church occasions.

Ji said the compensation allowed under the Public Works Act was not fair, given what they were being asked to give up and what was available to buy.

“Finding a similar home for us is extremely difficult, if not impossible, because I’ve looked at many websites, many real estate agents. Simply, properties likes ours, with an over 500-square-metre floor area, is so rare.”

The yard would be about 1.5 kilometres from Bunnythorpe resident Aaron Fox.

People could not be expected to be OK with having a huge freight operation jammed next to where they lived, he said.

Palmerston North mayor Grant Smith said the city’s central location had long been recognised as an advantage for logistics.

There was support for the new yard, but it would need to be built in a way to keep trucks out of urban areas, he said.

A proposed ring road for heavy traffic around the city was also on the cards and Smith said it was a vital component of the new logistics landscape.

“The KiwiRail hub and the ring road do need to go hand in hand. One can’t really really happen without the other, so the people of Bunnythorpe are correct [asking] what is happening to roading. That does need to be crystal clear.”

A decision from a recent hearing about designating the land for use as a rail yard is expected soon. It could end up in the Environment Court if appealed against.

Poulsen said KiwiRail was developing a business case for funding the yard’s initial stage, which could cost $1 billion.

It was expected it would be the most expensive stage because as well as developing an operational rail yard, from the Palmerston North end of the site, it would cover the cost of levelling the entire block of land and installing sound, noise and light pollution mitigation.

There is no fixed budget for the whole yard and subsequent sections are expected to be added as demand arises.

The new rail yard’s first stage could be operating from 2030.

NZDF on Afghanistan evacuation: ‘We had been helping individuals … over...