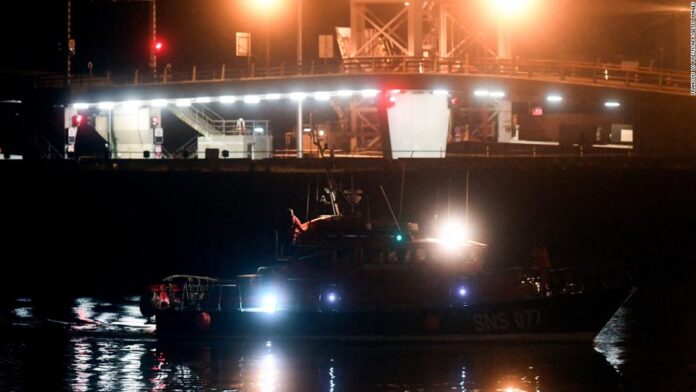 French Interior Minister Gérald Darmanin said five women were among the dead, two people had been rescued, and one is still missing. An initial toll said 31 people had died but the minister revised this number down to 27 late Wednesday.

Four suspected traffickers accused of being directly linked to the doomed crossing had been arrested, Darmanin said, according to Agence France-Presse.

The International Organization for Migration’s missing migrants project said the tragedy was the largest loss of life in the Channel since they began collecting data in 2014.

The narrow waterway between Britain and France is one of the busiest shipping lanes in the world. Refugees and migrants fleeing conflict, persecution and poverty in the world’s poorest or war torn countries risk the dangerous crossing, often in dinghies unfit for the voyage and at the mercy of people smugglers, hoping to claim asylum or economic opportunities in Britain.

Darmanin said the migrants’ dinghy had deflated, and when rescuers had arrived it was “deflated like an inflatable garden pool,” according to Reuters

“Those primarily responsible for this despicable situation are the smugglers, that is to say criminals who, for a few thousand euros, organize human trafficking from Iraq, Afghanistan, Africa, Asia and who then use these people to bring them to Belgium, the Netherlands, France, especially to cross the Channel and to go to Great Britain,” Darmanin said.

Migrants once sought to smuggle themselves aboard the trucks that regularly crossed the Channel on ferries or by rail from France. But in recent years that route has become more expensive, with people-smugglers charging thousands of euros for each attempt.

So far this year, more than 25,700 people have crossed the English Channel to the United Kingdom in small boats, according to data compiled by Britain’s PA Media news agency — three times the total for the whole of 2020. On Wednesday alone, French authorities rescued 106 people adrift in various boats in the English Channel, and more than 200 people made the crossing.

Accusations of politicizing the migrant crisis

French President Emmanuel Macron and British Prime Minister Boris Johnson both expressed horror at the tragedy, with Macron saying his country would not let the English Channel become a graveyard. The two leaders agreed to step up joint efforts to prevent the migrant crossings but accused each other of not doing enough.

“To the families of the victims, to their loved ones, I want to express my compassion and the unconditional support of France,” Macron said in a statement.

“I assure them that everything will be done to find and condemn those responsible, networks of smugglers who exploit misery and distress, endanger human lives and ultimately decimate families.”

In a phone call between the two leaders, Macron called on Johnson to stop politicizing the migrant crisis for domestic political gain, saying he “expected the British to cooperate fully and refrain from politicizing a dramatic situation for political purposes,” according to a readout of their call from the Elysee Palace.

He underlined the “shared responsibility of France and the United Kingdom” to deal with the migrant crisis on their sea border, the statement said.

“The answer must also come from Great Britain,” Darmanin said outside of a hospital in Calais on Wednesday night, adding the resources that United Kingdom is giving France “remains minimal compared to the resources that we [France] are obviously putting in place to put in more police officers, more gendarmes, more cameras, more resources in general.”

Macron said France had been working with the United Kingdom for several months to dismantle smuggling networks.

“Since the beginning of 2021, thanks to the mobilization of 600 police officers and gendarmes, 1,552 smugglers have been arrested on the northern coast and 44 smuggling networks have been dismantled,” he said.

“Despite this action, 47,000 attempts to cross to Great Britain have been made since January 1, with 7,800 migrants saved by our rescue services.”

French Prime Minister Jean Castex described the incident as a “tragedy.” “My thoughts are with the many missing and injured, victims of criminal smugglers who exploit their distress and misery,” he said in a tweet.

British Prime Minister Johnson said he was “shocked and appalled, and deeply saddened by the loss of life at sea.”

“My thoughts and sympathies are, first of all with the victims and their families, and it’s an appalling thing that they have suffered,” Johnson told reporters.

“But I also want to say that this disaster underscores how dangerous it is to cross the Channel in this way. And it also shows how vital it is that we now step up our efforts to break the business model of the gangsters who are sending people to sea in this way, and that’s why it’s so important that we accelerate if we possibly can all the measures contained in our borders … so that we distinguish between people who come here legally, and people who come here illegally.”

He added that the authorities would “leave no stone unturned to the business proposition of the human traffickers and the gangsters … who are literally getting away with murder.”

Johnson said it was time for Britain, France and Europe to “step up” and work together. He was due to chair a meeting of the Cobra emergency committee in response to the tragedy, his spokesperson said.

British Home Secretary Priti Patel said in a statement that the tragedy “serves as the starkest possible reminder of the dangers of these Channel crossings organized by ruthless criminal gangs.”

She added: “We will continue to intensify all cooperation with France and other European partners to prevent migrants embarking on these deadly journeys.”

Beth Gardiner-Smith, CEO of the NGO Safe Passage International, said the deaths could have been prevented and called for the British Home Secretary to resign.

“More and more people are risking the freezing, frightening journey across the Channel in small, unstable boats since the government closed safe routes to the UK last year,” Gardiner-Smith said. “Choosing to play politics with people’s lives, the government has failed to prevent people risking the crossing and this is the result. The government must act now to save lives by opening safe routes.”

On Monday, France’s Ministry of Interior announced it was sending equipment and vehicles worth over 11 million euros ($12.3 million) as part of an agreement with Britain, “to secure the coastal strip extending over more than 130 kilometers (80 miles), from Dunkirk to the Bay of Somme.”

It added that “the police and gendarmes will have additional resources to carry out the mission of fighting illegal immigration.”

Last week, 243 people were rescued in the English Channel as they tried to cross to the United Kingdom.

Making Covid-19 vaccines mandatory was once unthinkable. But European countries are showing it can work

Italian Official Resigns in Storm Over Plans to Identify Park After...