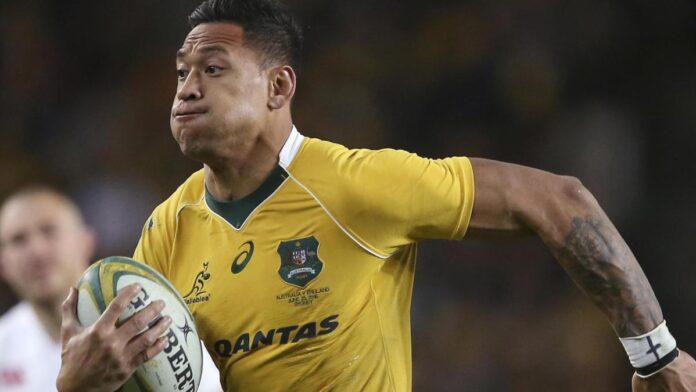 The path has been cleared for former Wallabies and NRL star Israel Folau to make a return to international rugby, should he choose, with Tonga.

World Rugby overnight confirmed a change to eligibility rules that means from January 2022, a player will now be able to represent another country after a stand-down period of three years.

A player can move to a nation of their birth, of that of their parents’ or grandparents’ birth but can only switch allegiance once.

Folau has Tongan heritage and Wallabies great Toutai Kefu, the Tongan coach, said last week he had talked to Folau and the 32-year-old was keen to join the islanders’ fold.

Folau hasn’t played international rugby since the last of his 73 Tests for the Wallabies against England at Twickenham in 2018.

After being sacked by Rugby Australia for a series of homophobic tweets, he joined French rugby league side Catalans Dragons in the UK Super League.

After a brief stint with Gold Coast rugby league club the Southport Tigers earlier this year, Folau will return to rugby in 2022 with Japanese side Shining Arcs.

World Rugby said the amendment to its eligibility regulations passed by its ruling council would “benefit players and the global competitiveness of rugby”.

“We have listened to our membership and players and sought to update the regulation recognising the modern professional rugby environment without compromising the integrity of the international game,” said World Rugby chairman Bill Beaumont, a former England captain.

The move has also been backed by the global players’ union.

“Many players across the world will now benefit from the chance to represent the country of their or their ancestors’ birth, serving as a real boost to the competitiveness of emerging nations, which, in turn, will benefit the game as a whole,” International Players’ Union chief executive Omar Hassanein said.

Folau could be among a number of beneficiaries from the rule change, which could be a game changer for the Pacific Islands with the amendment meaning that the likes of New Zealand stars like Charles Piutau, who has 17 All Blacks caps, George Moala and Vaea Fifita could play for Samoa.