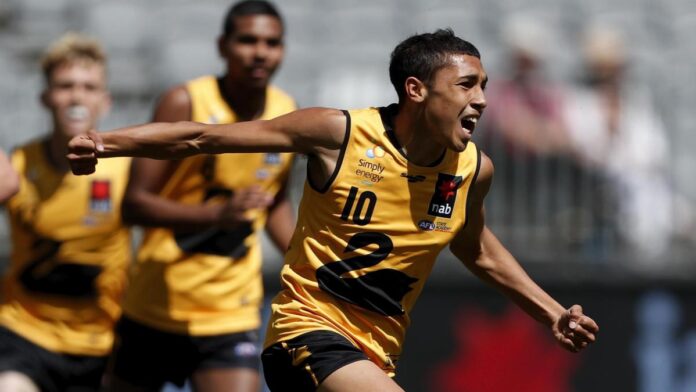 Mt Barker speedster Arthur Jones has been drafted to the AFL, picked up by 2021 grand finalists Western Bulldogs in today’s AFL National draft.

The Claremont and Wesley College product has been snapped up by the Bulldogs with their third-round selection after a standout season in the WAFL colts competition and Public Schools Association.

The 18-year-old has been a draft bolter since a dominant performance for WA against South Australia in a curtain-raiser game to the AFL grand final at Optus Stadium.

A late call-up for WA, he went on to have 16 touches including two goals to be among their best in a hard-fought win.

He also tested well at the national combine and played in two of WA’s State matches in front of AFL recruiters.

In a statement on their club website tonight, the Bulldogs said Jones was “a player with tremendous upside, who can play as an outside midfielder or wingman, as well as a forward”.

“The 18-year-old is known for his endurance and impressive kicking skills,” the club said.

He played 10 games for Claremont in the WAFL competition averaging 12.4 touches and 2.1 marks but his ability to run and carry the ball stood out.

In the lead-up to the draft, AFL talent manager Kevin Sheahan said his “speed and agility lit up the midfield” in the AFL grand final curtain-raiser.

“Part of the Krakouer clan, he really caught the eye with his competitive performance in the 2km test racing Corey Warner at the NAB AFL Draft Combine before recording a 6 minutes and 30 seconds to finish 2nd overall in WA for endurance,” Sheahan said.

Jones played his junior football with Mt Barker and was part of the Great Southern Storm, a football program that helps young talent before they try their luck at WAFL level.