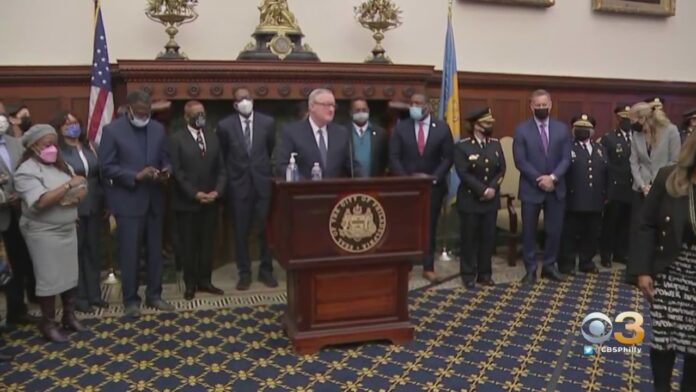 PHILADELPHIA (CBS) — Five-hundred — that’s the sobering number of homicides the city of Philadelphia reached on Wednesday. The number ties 1990 for the deadliest year in city history.

The city hit the number Wednesday evening after a 55-year-old woman was shot multiple times and killed in South Philadelphia.

“It’s heartbreaking, heart-wrenching, it’s terrible to have to get up every morning and look at the numbers,” Kenney said.

The mayor, flanked by city leaders and Police Commissioner Danielle Outlaw, didn’t mince words as he took direct aim at state lawmakers. Kenney called on the legislature to step aside, and allow the city to control its own access to guns.

“There are people making money selling these guns, making these guns and the legislature, not the people behind me, don’t care,” Kenney said. “They don’t care how many people get killed.”

“We deserve better, our children deserve better, our communities deserve better,” Outlaw said. “These victims are far more than a number. It’s not about when we reach 200, 300, 500, 600 – these are people. These victims are brothers, sisters, mothers, fathers, nieces, nephews, mentees. Team members, classmates – many of them children. And for those whose lives have been tragically cut short, their life has left a void in the hearts of their families. And their absence has left a profound impact on our community.”

In a week where Philadelphia has seen some of the most horrendous murder scenes, including a pregnant woman, shot and killed returning from her baby shower, and a mother gunned down in front of her 4-year-old twins, officials are advocating for stricter gun laws. Outlaw said despite the bleak homicide rate, the city is making a dent in crime.

“Earlier in the year, we were hovering around a 40% increase in our homicides and we are now closer to 13%,” Outlaw said.

Despite some progress, officials are desperately asking for the violence to stop.