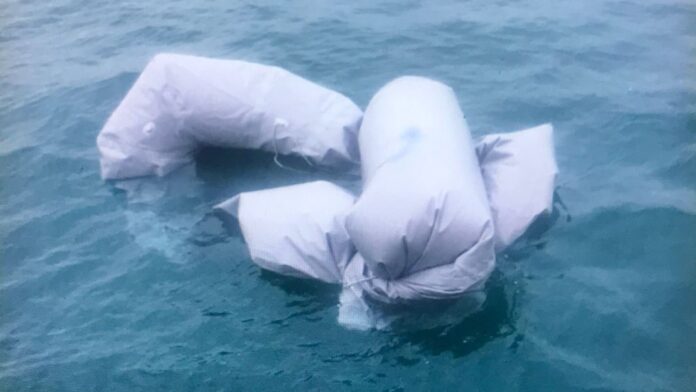 A mayday call by French coastguard requesting urgent help from “all ships” during yesterday’s Channel boat emergency has been obtained by Sky News.

Twenty-seven people – 17 men, seven women and two teenage boys and a girl – died near Calais while trying to cross in a flimsy boat.

Two people survived and were taken to hospital with hypothermia.

In the mayday call, the coastguard can be heard putting out an alert to all boats in the area.

:: Death in the Channel – watch a special programme on Sky News at 7pm

The radio operator gives coordinates and asks nearby vessels to attend, telling them that 15 people are in the water.

They add: “All ships in this area are requested to have a [unclear] lookout to proceed to this area to take contact and report any information to Gris-Nez emergency co-ordinating this operation.”

Charles Devos, regional manager of lifeboat association (SNSM) in Calais, was one among the first people at the scene.

He told Sky News that he dragged six bodies from the sea, including a pregnant woman, and seeing those drowned was “traumatic”.

“I can’t remember such a tragedy. It’s inexplicable,” he said.

“I saw the blow-up boat had really deflated. Was it a valve that came loose or did it hit an object? You never know but I don’t think it was a collision.”

And he said: “I think it happened due to overloading. Don’t forget, you think the sea is calm. The sea isn’t calm because it’s nearly always choppy.”

Mr Devos went on: “It’s very, very shocking. It was a bit like the film Titanic when you saw all these people plunged into the water, drowning, with no means of being able to be rescued.

“Unfortunately we were only able to recover the dead people.”

Describing the dinghy, he said: “It was an inflatable, very light boat that was around 10m long.”

He added: “It’s not the first time I’ve boarded this type of boat. It’s really light boats that are overwhelmed. The tragedy came about because the boat was overwhelmed. Boats that transport 20 people, we find them with around 50 people on them”.

The Kurdish government told Sky News that some of the victims were Kurds and that it has appealed to the UK and EU for help stopping migrants leaving Iraq.

The two survivors were Somali and Iraqi.

Wednesday’s loss of life is the worst of the migrant crisis, which has seen numbers reaching the UK by sea surge from 8,417 in 2020 to more than 25,000 so far this year.

A government minister revealed last week that just five people had been returned to Europe after making it across the Channel.

And in the year to June 2021, deportations from the UK decreased to 2,910 – less than half of the previous year. The drop has been blamed on the pandemic.

The government said the vast majority of the deportations were “Foreign National Offenders” – non-UK citizens who had committed a crime.

The UK insists France must do more to stop the crossings, while France says the UK should deter people from wanting to enter the country in the first place.

Priti Patel, the home secretary, told the Commons the deaths were a “dreadful shock” but “not a surprise”.

“It does need a Herculean effort and it will be impossible without close cooperation between all international partners and agencies,” she said.