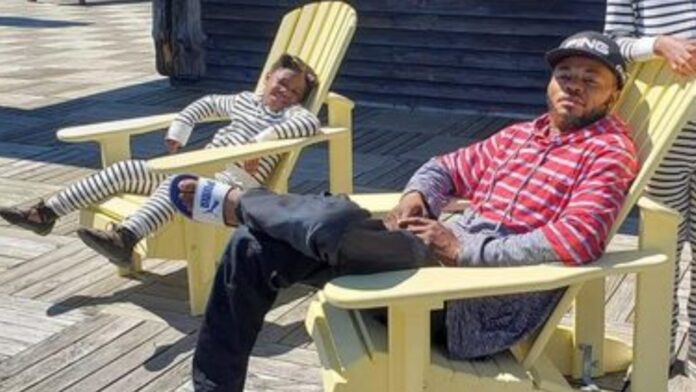 
Calgary police say charges have been laid in a hit-and-run crash on Macleod Trail on Wednesday that killed a seven-year-old girl and her father.


The impact of the collision sent the sedan over the median and into the southbound lanes of the road where it was struck by a half-ton truck.


Following the collision, the three-quarter ton crossed the median, as well as the southbound lanes and shoulder of the road, before coming to a stop along the railroad tracks that run parallel to Macleod Trail S.E.


Firefighters extricated the occupants of the sedan, but two of them, a 37-year-old man and his seven-year-old daughter, were pronounced dead at the scene.


Paramedics took an 11-year-old girl from the sedan to hospital in serious condition where she was later released.


Family have since identified the victims as Pierre Mulamba and his daughter Ninelle Tshamwena.


The 11-year-old in the vehicle with them was Mulamba’s other daughter.


The driver of the half-ton truck wasn’t injured.


Police said the driver of the three-quarter ton truck, a man in his 50s, attempted to flee the scene on foot but was apprehended a short distance from the crash scene.


On Thursday, police announced Yannick Joseph Bouchard, 51, of Calgary, had been charged with:


Bouchard remains in custody pending his next court appearance.


Mulamba and Tshamwena — who also went by the name ‘Blessing’ —- are described by family members as kind souls who both had a passion for singing and were excited about the opportunity brought to them after immigrating to Canada.


Andy Mutombo, who lost his brother-in-law and niece in the crash, spoke to CTV News from his hometown of Kinshasa, in the Democratic Republic of Congo (DRC).


He says Mulamba studied in the DRC and earned a bachelor’s degree. He then moved to the United States with his wife, Janine, before coming to Calgary a few months later, where he took classes to become a truck driver and regularly drove across the country.


“It was really a joy for them to be in Canada and definitely in Calgary,” Mutomba said, adding the entire family loved singing in their local church choir and being involved in their local community.


According to police, excessive speed is believed to have been a factor in the fatal crash and the presence of alcohol has still not been ruled out as the investigation continues.


“The speed limit is for safety because collisions can happen in a split second. Everything that you’re doing could be right, but in that split second because you’re going, things can go wrong exceptionally quickly and they can have devastating effects,” said Sgt. Colin Foster of the CPS traffic unit.


Foster adds the black pickup was registered to the suspect and was not reported stolen.


Tracy Cole, who witnessed the crash Wednesday evening, says she was nearly struck by the black pickup truck while travelling northbound on Macleod Trail S.E.


“He pulled past me on the right side, then swerved into the lane in front of me, and then he just kept going and hit the rear in the car that was directly in front of me,” Cole said.


“All I could see was debris going everywhere, car parts, dust and smoke swerving into the road.”


Cole says she was travelling the speed limit of 80 km/h and that the speed of the black pick-up truck was excessive.


“He passed me as if I was stopped, I couldn’t believe there was no brake lights and he just plowed into the vehicle in front of me, it happened so fast and was honestly so terrifying,” she said.


At this time, Calgary police are offering support to anyone who was affected by witnessing the crash, which can be accessed by calling 211 or the Calgary Police Service Victims Assistance Support Team at 403-428-8398.


Anyone with dash cam footage of the suspect vehicle prior to the collision or who witnessed the crash is asked to contact the Calgary Police Service non-emergency line at 403-266-1234 or anonymous tips may be submitted to Crime Stoppers at 1-800-222-8477.