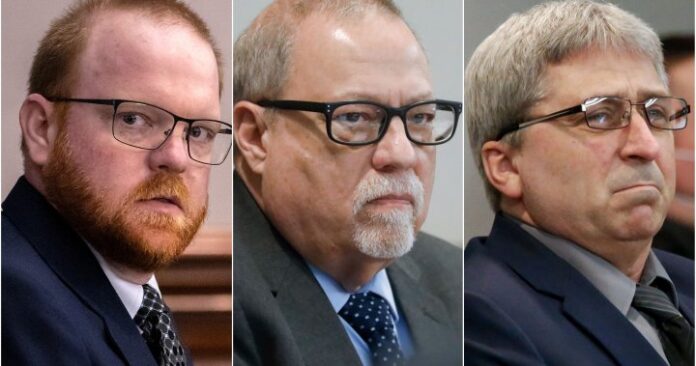 The three men who shot and killed Ahmaud Arbery, while he was out running in Satilla Shores, Georgia have been found guilty of murder by a jury.

The trial, which started on Nov. 5 and went until Nov. 23, saw the lawyers for the accused argue the three white men acted in self-defence as Arbery lunged at their drawn weapons before they shot and killed him. The prosecution argued the three men provoked, intimidated and threatened Arbery before eventually killing him.

The trial was overseen by a mostly white jury, with only one of twelve jurors being Black. The defence had 11 of the 12 potential Black jurors removed prior to trial proceedings.

The minimum penalty for murder is life in prison with possibility of parole after 30 years at the discretion of the judge.

Read more:
Man who fatally shot Ahmaud Arbery testifies: ‘This was a life or death situation’

Arbery’s mother, Wanda Cooper-Jones, thanked the large crowd and everyone who had supported the family throughout the past 17 months.

“Thank each and every one of you who fought this fight with us. It’s been a long fight, it’s been a hard fight, but God is good,” she said.

Cooper-Jones admitted that she never thought her son would ever receive justice and said now that the correct verdict had been reached, he will be able to rest in peace.

Arbery’s father Marcus Arbery Sr. also spoke to the crowd. He said that no father should have to go through what he did and preached that love will get us through the difficulties facing America.

“I don’t want no dad to watch their kid get lynched and shot down,” he said.

The first speaker to address the crowd, which was celebrating outside the courtroom, was Rev. Al Sharpton.

“Let us thank the activists that y’all called the mob that marched and stood up,” said Sharpton.

The Black pastor, who had at one point been asked by the defence to be removed from the courtroom, said the Arbery case proved that justice can be achieved.

“A jury of 11 whites and one Black in the Deep South stood up in the courtroom and said that Black lives do matter,” said Sharpton. “We got a lot more battles to fight, but this was an important battle today.”

The lead prosecutor in the case, Linda Dunikoski, said the guilty verdict was an easy one, all the jury had to do was the right thing.

U.S. President Joe Biden commented on the Arbery trial, noting that his death is a reminder of how far America still has to go in the fight for racial justice.

“Nothing can bring Mr. Arbery back to his family and to his community, but the verdict ensures that those who committed this horrible crime will be punished,” read a press release from Biden.

He added that his administration would continue to work to ensure racial justice in America. Vice President Kamala Harris also released a statement in which she called out the defence’s descriptions of Arbery.

“The defense counsel chose to set a tone that cast the attendance of ministers at the trial as intimidation and dehumanized a young Black man with racist tropes. The jury arrived at its verdicts despite these tactics,” wrote Harris in a press release.

Harris wrote that no verdict, even this one will take away the grief felt by his family.

On Feb. 23, 2020, Arbery, a 25-year-old Black man, was killed while running through a mostly white neighbourhood after being chased by the three men.

According to police reports and testimony, Greg McMichael saw Arbery running on his street and signalled to his son Travis McMichael that he thought the 25-year-old was running away after committing a crime. The two men said during the trial they loaded up their pickup truck and secured guns thinking Arbery would be armed. They were joined by Bryan who rode in his own pickup and filmed part of the encounter on his phone.

An autopsy found Arbery had been shot twice in the chest and once with the bullet grazing his wrist.

Throughout the trial, the prosecution pointed to the defendants’ unfounded assumptions about Arbery. Prosecutors argued the McMichaels had no real knowledge of any wrongdoing Arbery might have committed. The prosecution noted Arbery had never been caught stealing anything on camera from the unfinished home he ran to in the neighbourhood. They prosecutor said the vigilantism displayed by the McMichaels and Bryan toward Arbery was uncalled for and ultimately led to his death.

The defence, meanwhile, said that while the defendants didn’t definitively know Arbery had committed a crime, the community was experiencing an uptick in property theft at the time. Defence counsel argued the intent of the three men was to make a citizen’s arrest, to detain and question Arbery. They said Travis McMichael only shot Arbery in self-defence after Arbery charged him and began throwing punches.

Controversy surrounded the case because charges were originally not pursued by the Brunswick district attorney at the time, who had previously worked with Greg McMichael when he was an investigator. The district attorney eventually recused herself and referred the case to another office, which also recused itself due to relationships with the McMichaels.

Eventually, the killing went public more than two months after it happened when a local radio station posted Bryan’s video on its website. The video immediately went viral and received national attention. Within hours of the video being released, a grand jury investigation was convened.

The Arbery killing was one of the drivers of the Black Lives Matter movement.

— with files from The Associated Press and Reuters