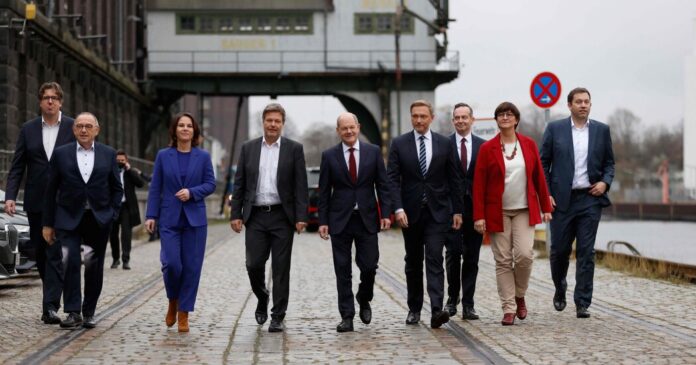 For the first time in 16 years, Germany will have a center-left government and a new chancellor, Olaf Scholz, a Social Democrat, whose job will be to fill the shoes of Angela Merkel, the woman who made Germany indispensable in Europe and the world.

After much anticipation, Mr. Scholz and his coalition partners from the progressive Greens and the pro-business Free Democrats stepped in front of the cameras on Wednesday to announce a 177-page governing deal they have negotiated under strict secrecy since the Sept. 26 election.

They acknowledged their differences but said they had found enough common ground to push forward with plans to beat back the pandemic, increase the minimum wage and put Germany on a path to quit coal and expand renewable energy to 80 percent by 2030.

“We are united in a belief in progress and that politics can do good,” Mr. Scholz said in a joint news conference. “We are united in the will to make the country better, to move it forward and to keep it together.”

Mr. Scholz is expected to be sworn in as chancellor early next month. He will immediately face a pressing roster of crises, including a pandemic that is spiraling quickly upward and border conflicts in Belarus and Ukraine.

It is the end of an era for Germany and for Europe. For over a decade, Ms. Merkel was not just chancellor of Germany but effectively the leader of Europe. She steered her country and the continent through successive crises and in the process helped Germany become Europe’s leading power for the first time in modern history.

Mr. Scholz’s center-left party, which narrowly won the September election, governed with Ms. Merkel’s conservative Christian Democrats for three of her four terms. Mr. Scholz himself was her finance minister for the last four years.

“It’s typical for Germany: It’s change and continuity in one,” said Cem Özdemir, a prominent lawmaker for the Greens and one of 300 negotiators of the new coalition treaty.

There is clearly tension built into the new government, with important yet opposing ministries in the hands of coalition partners who sit on opposite ends of the political spectrum. That tension is likely to remain a theme of the government and to test Mr. Scholz’s ability to balance competing agendas.

In one key concession, according to a person close to the coalition talks, the finance ministry will go to the leader of the Free Democrats, Christian Lindner, a fiscal conservative who has ruled out tax increases.

The post-Merkel era begins. For the first time in 16 years, Germany will have a center-left government and a new chancellor, Olaf Scholz, whose job will be to fill the shoes of Angela Merkel. Here’s what to know about the new government:

Who Is Olaf Scholz? A lifelong Social Democrat, Mr. Scholz, 63, has been a familiar face in German politics and served in two governments led by Ms. Merkel’s Christian Democratic Party, most recently as her finance minister. But he has also been something of a political chameleon.

An uncommon coalition. The new government led by Mr. Scholz brings together three parties — the Social Democrats, the environmentalist Greens and the pro-business Free Democrats. It is the first time since the 1950s that three partners have formed a government.

The governing deal. Despite their differences, the parties said they had found enough common ground to push forward with plans to beat back the pandemic, increase the minimum wage, address climate change and legalize marijuana.

The pandemic offers a crucial test. A spike in cases has thrust Germany into its worst crisis of the pandemic, vaulting the issue to the top of the coalition’s agenda. But in its first test, the incoming government sent mixed signals before the latest wave forced a retreat to tougher measures.

Foreign policy crises await. Rarely has a German leader come into office with so many burning crises. Mr. Scholz will have to deal with tensions on the Polish-Belarusian border, a Russian president mobilizing troops near Ukraine, a more confrontational China and a less dependable U.S.

Mr. Lindner could serve as a brake on the new government’s boldest ambitions for change, especially those coming from the Greens, who had campaigned on revolutionizing the economy to meet the challenges of a warming planet.

But the Greens did not walk away empty-handed. The party’s co-leaders, Annalena Baerbock and Robert Habeck, secured two powerful posts.

Mr. Habeck will run a new superministry combining the economy and climate, the person said, and Ms. Baerbock, who ran as the Greens’ candidate for chancellor, will be Germany’s first female foreign minister.

On issues ranging from Europe to trade and foreign policy, most analysts expect the new government to broadly stay the course set by its predecessor. But a number of urgent crises — and Mr. Scholz’s two more hawkish coalition partners — might force the new chancellor to rethink some past policies.

Mr. Scholz’s Germany could turn out to be somewhat more willing to throw its weight behind European integration and to close ranks with the United States in putting pressure on China and Russia.

But the buzzword was continuity.

“The new government will essentially be one of continuity, not change,” said Holger Schmieding, the chief economist of Berenberg Bank. “All those who were hoping that this would be the start of something completely different will be disappointed.”

Portugal detects 13 cases of Omicron tied to a soccer team.

Swiss voters approve their government’s Covid policy in a referendum.

The Netherlands finds at least 13 Omicron cases and expects more.

Digital vaccination playing cards go into impact in Europe, with some...