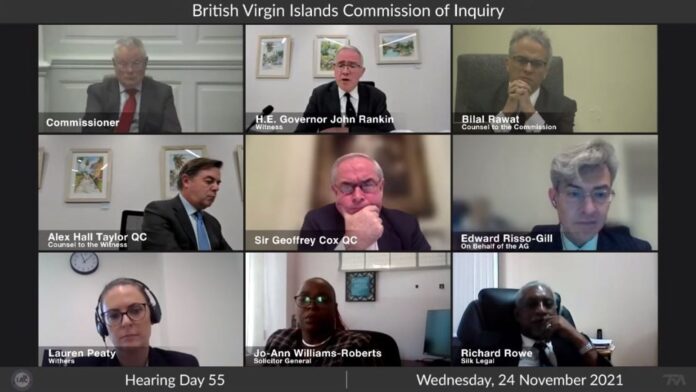 Labour’s deputy leader has accused Boris Johnson of being “corrupt, spineless and cowardly” after Tory MP Sir Geoffrey Cox was seen again working as a barrister while parliament was sitting.

Angela Rayner said Sir Geoffrey is “openly taking the mick” as he took part in a Zoom hearing for an inquiry into corruption in the British Virgin Islands on Wednesday afternoon.

The barrister, who is the top-earning MP from a second job, is representing global firm Withers in representing the BVI government at a corruption inquiry launched by the UK government in January.

What is @BorisJohnson going to do about this?

One of his MPs is openly taking the mick. A Conservative MP is on day 55 of a hearing representing a tax haven against our own government and our corrupt, spineless and cowardly Prime Minister isn’t doing anything about it. https://t.co/j8sD8zZGkM

As of the beginning of November, Withers had paid him more than £800,000 since he began representing the law firm in September last year.

Sir Geoffrey’s work came under scrutiny earlier this month after it was revealed he voted by proxy in the House of Commons while working more than 4,000 miles away in the Caribbean.

Footage of the original Zoom hearing appeared to show Sir Geoffrey in his Commons office and he then also faced claims he used his parliamentary office to undertake some of his work for Withers, which is not allowed under the MPs code of conduct.

In Wednesday’s Zoom session his background was blurred.

According to his entry in the register of members’ financial interests, Sir Geoffrey did approximately 434 hours of work for Withers between January and July this year, at an average of more than 15 hours per week.

Wednesday’s Zoom appearance, which could be accessed by the public on YouTube, revealed it was the 55th day of the hearing, meaning there have been 22 days of it in the past 70 days.

Ms Rayner tweeted: “What is Boris Johnson going to do about this?

“One of his MPs is openly taking the mick.

“A Conservative MP is on day 55 of a hearing representing a tax haven against our own government and our corrupt, spineless and cowardly prime minister isn’t doing anything about it.”

Following the early November accusations, a statement from Sir Geoffrey’s office said he has always been clear with constituents about his work outside parliament.

It said: “Sir Geoffrey regularly works 70-hour weeks and always ensures that his casework on behalf of his constituents is given primary importance and fully carried out.”

The statement posted on Sir Geoffrey’s website said “he does not believe that he breached the rules” regarding use of his office but “will of course accept the judgment of the Parliamentary Commissioner or of the committee on the matter”.

Sir Geoffrey also claimed he consulted the Conservative chief whip about voting by proxy while in the Caribbean and “was advised that it was appropriate”.

The statement said it is up to voters “whether or not they vote for someone who is a senior and distinguished professional in his field and who still practises that profession”.

Sir Geoffrey describes himself as a “leading barrister in England” who “makes no secret of his professional activities”.

Ms Rayner wrote at the time to the standards comissioner calling for a formal investigation into allegations Sir Geoffrey used his office for legal work.

Sky News has contacted Sir Geoffrey’s office and Number 10 for a comment.

Prince Philip: Royals anticipated to put on fits at Duke of...

Hashtag United footballer ‘could have been blinded’ after firework explodes on...