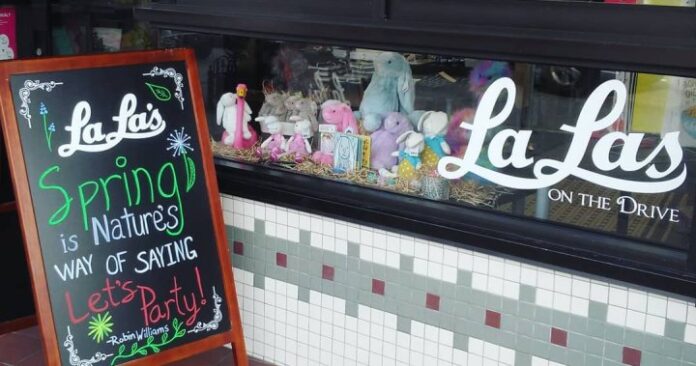 “I was terribly heart-stricken,” said the LaLa’s owner.

Egyed founded LaLa’s in 1996. The concept was a success until COVID-19. Egyed pivoted to online sales – creating cash flow but no revenue – before accepting that the pandemic did not support her gift store’s business strategy.

“LaLa’s was built on amped-up fun and casual socialization inside of a brick and mortar store,” Egyed told Global News.

“And that model I knew, was going to be disrupted for at least three years if not more.”

It was a gamble she wasn’t willing to take with her personal wealth.

Egyed moved as much inventory as she could in the summer of 2020 – before closing her Deep Cove and Commercial Drive locations – at a time when she should have been celebrating nearly 25 years in business.

A business owner in Nanaimo faced the same dilemma.

“We’re the casualty of this,” Pattie Walker said as she prepared for the last Halloween at her popular Nanaimo store.

The pandemic was the final push for Pattie’s Party Palace.

After almost 23 years of selling costumes year-round, Walker will close on Nov. 20 with one last party.

“We’re totally event-based so it was very decimating to the business to lose all of our events,” she told Global News on Oct. 29.

Websites like Amazon were siphoning sales when COVID-19 drove even more shoppers online and put celebrations on hold.

“As a small independent, you can’t compete,” said Walker.

At least 84 street-level businesses have closed in downtown Vancouver since early 2020, according to the DVBIA’s May 2021 State of Downtown report.

Forty-five per cent of them were independent stores or restaurants.

“To have to lay everybody off, it’s heartbreaking,” said business owner Brendan Ladner.

“It’s a really, really hard thing to do.”

In October, Ladner was forced to let 17 employees go when he shut down his trio of quick-service restaurants in downtown Vancouver.

“It’s everything we’ve built, and we worked so hard and did so much,” he told Global News.

Ladner opened the first SMAK in 2013 – on West Pender Street in the city’s financial district.

“It took a pandemic to take us down. You know, you’re doing growth and then the pandemic comes,” Ladner added.

He was optimistic things would turn around until this past September’s sales were slower than in 2020.

“People aren’t coming back to work in offices and they might not for a very long time,” said Ladner, who moved to Whistler to avoid seeing his SMAK dream collapse.

“When you take all the customers away, you’re kind of left with a business model that doesn’t really work anymore.”

“This is going to be a pivotal season for those that have been struggling over the last 18 months,” she told Global News.

“Please show them some love.”