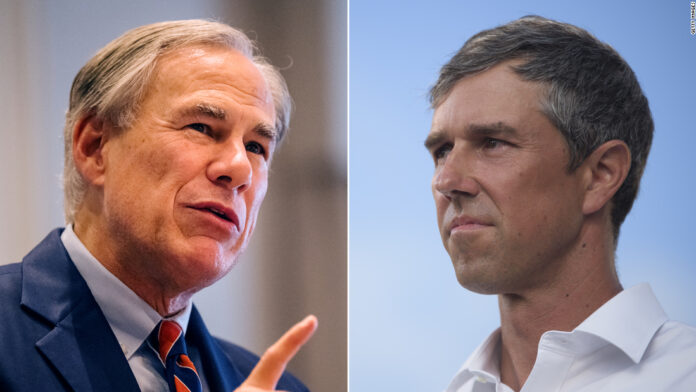 Republican Gov. Greg Abbott, who announced Tuesday that he had filed to run for reelection, started attacking O’Rourke as radical and out of touch even before O’Rourke made his gubernatorial candidacy official. In a 30-second video ad released online in late October, Abbott’s campaign drew attention to comments O’Rourke made on a podcast in June 2020 on the subject of the “defund the police” movement.

Or, rather, Abbott’s campaign drew attention to an altered version of O’Rourke’s comments.

The second deceptive edit deleted key words to make it sound like O’Rourke had called for “dismantling” police departments, end of story. He had actually called for dismantling “and rebuilding” departments in “some necessary cases.”

The third deceptive edit was especially egregious. This one mashed together phrases from three different O’Rourke sentences. The stitch job made it sound like an O’Rourke comment about the importance of Black Lives Matter activism, and how it is part of a tradition of civil rights activism, was a comment about the importance of defunding the police and dismantling police departments.

For emotional effect, the ad juxtaposed O’Rourke’s altered words with a series of video clips of rioting and looting.

The Abbott campaign’s edits are extra notable because O’Rourke’s actual, unedited comments in the June 2020 interview gave Republicans ample attack ammunition. Other O’Rourke opponents have highlighted his words about policing without altering them.
Among other comments on policing, O’Rourke praised the city council of Minneapolis, Minnesota, for a decision that month to move toward dismantling the local police department and replacing it with a “Department of Community Safety.” (Minneapolis voters rejected this idea when it was on the ballot earlier this month.) And because there is no single agreed-upon definition of what counts as “defunding the police,” Abbott could have tried to make an argument that O’Rourke’s positive words about the notion of defunding certain police “line items” is evidence that he had supported the “defund” movement.

But the Abbott ad did not include O’Rourke’s comments about Minneapolis. And on police defunding, the ad sliced and diced O’Rourke’s words instead of letting Texans evaluate them for themselves.

Abbott campaign spokesman Mark Miner declined on Monday to directly address CNN’s questions about the distortions in the ad, which the campaign promoted on Twitter last week. Miner said only: “Beto O’Rourke clearly supports dismantling and defunding the police and he will need to explain his anti-law enforcement policies to the people of Texas.”
O’Rourke campaign spokesman Joe Bowen said on Monday, “Beto does not support defunding the police.” According to Texas Tribune political correspondent Patrick Svitek, O’Rourke told reporters last Wednesday, “I don’t think I’ve ever advocated for defunding the police.”

We’ll look at O’Rourke’s position a little later. First let’s walk through how the Abbott ad crafted its deception.

After showing clips of masked protesters, smoke on a street and a car on fire, the Abbott ad shows O’Rourke on camera saying: “I really love that Black Lives Matters and other protesters have put this front and center, to defund…” Then the screen cuts to a stylized shot of a man’s moving mouth as O’Rourke’s voice says, “Completely dismantling those police forces.”

But this is not a sentence O’Rourke actually uttered. In fact, the ad deleted two sets of important words, then strung the remaining words together to alter their meaning.

Here’s what O’Rourke said. The bolded words are the ones that the ad left out.

“So I really love that Black Lives Matters and other protesters have put this front and center, to defund, you know, these line items that have overmilitarized our police, and instead invest that money in the human capital of your community, make sure that you have the services, the help, the support, the health care necessary to be well and not require police intervention. And then also in some necessary cases, completely dismantling those police forces and rebuilding them.”

The ad moved a key phrase from one sentence to another

The end of the ad features O’Rourke’s voice — over video clips of rioting and looting — saying this: “Defund, dismantling police forces, it’s the only way that things get better.”

But that is not a sentence O’Rourke uttered either.

So where did the supposed quote come from? The Abbott campaign was unwilling to explain, but it appears that the campaign took three separate O’Rourke remarks from the June 2020 interview and stitched them together as if they were one.

It wasn’t until more than a minute after that — a full minute and a half from the “defund” comment — that he uttered the words “it’s the only way that things get better.” And the context for these words was much different than the ad suggested.

O’Rourke praised the Minneapolis decision to move toward dismantling and replacing the police department, saying the only solution for such a problem-plagued department is “completely dismantling that system and rebuilding it intentionally with the community members at the table.”

He said that this notion might seem dangerous to some people but that “any major change” in US history has seemed dangerous to some. He noted that the activism of civil rights movement icon John Lewis and fellow Freedom Riders was dangerous to the status quo.

Then O’Rourke said: “So let’s look at Black Lives Matter in that same context and from that same perspective. What they are doing right now is a very proud and necessary tradition of civil rights, and it’s the only way that things get better.”

When CNN asked O’Rourke’s campaign on Monday for his current position on defunding the police, spokesman Bowen said he does not support it and never has. Again, O’Rourke himself said Wednesday, “I don’t think I’ve ever advocated for defunding the police.”

Because of the haziness of the phrase “defunding the police,” O’Rourke’s comments in the 2020 interview leave an opening for people to argue either way. Defenders of his position can accurately note that he didn’t make a general call for all kinds of police funding to be removed. Opponents can accurately note that he spoke positively of taking away certain police funding and of dismantling (and rebuilding) some police departments.

Bowen said that O’Rourke believes that police departments in Texas are now solving a lower percentage of violent crimes than they did when Abbott took office in 2015 because the departments are overburdened “with responsibilities that may not require a law enforcement response.”

“We should allow other departments and community supports to respond to those challenges in order to allow police forces to focus on their most important job for public safety: addressing violent crime,” Bowen said.

O’Rourke said Wednesday, in the comments reported by Svitek of the Texas Tribune, that he doesn’t want law enforcement to have to deal with “issues where it’s more of a mental health care challenge and incident that could be addressed with a social worker or someone who’s not in law enforcement.”

Bowen said, “That’s a false choice. We cannot guarantee the safety of our communities focusing on one or the other, we must do both. We must invest in these additional services so that police departments can focus their resources on preventing and solving crime.”