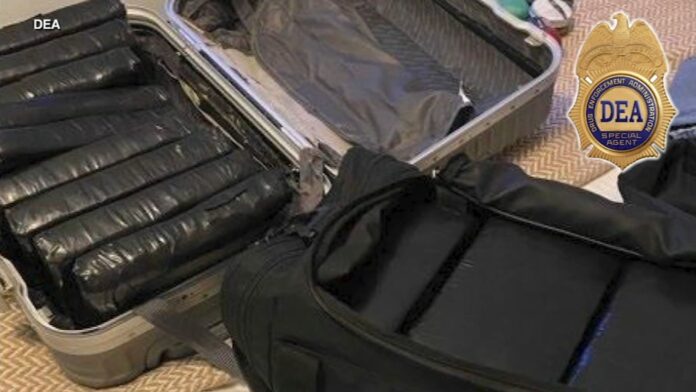 CHICAGO (WLS) — Disturbing new data shows overdose drug deaths are at all-time highs in Chicago and across the country. Drug cartels continue to ship illicit products while other supply lines around the world struggle.

For the drug cartels planes, trains and automobiles aren’t a beloved Thanksgiving movie. It’s a description of their logistics machine.

Tossed in trucks, tunnels and even submarines, and authorities say this business grinds on even as legitimate supply chains are struggling.

On Wednesday, Nov. 3 at Gary/Chicago International Airport, a private jet registered in Mexico arrived with 220 lbs. of cocaine, according to federal drug investigators. Investigators said the drugs were packed inside several suitcases which were transferred to a waiting SUV.

“If they lose their loads, I mean, it could be the difference between life and death,” said Ed Farrell, owner of Silver Star Protection Group.

Farrell, who is also a former deputy U.S. Marshal, said drug operatives always look for a back door, away from locations where there is more attention.

“They went to a further away airport, which tells me there’s less scrutiny,” said Farrell.

Gary airport officials said there was no inspection of this plane because it had cleared customs in Houston a few hours earlier after a flight from Toluca, Mexico.

Among those onboard was 30-year-old Mexican national Sebastian Vazquez-Gamez, according to a federal complaint. He allegedly proceeded to Chicago’s Gold Coast and checked into a Chestnut Street hotel, where agents from the U.S. Drug Enforcement Administration said they arrested him and confiscated the cocaine.

Agents said sales ledgers found in Blas’ car revealed hundreds of thousands of dollars in drug deals. Federal authorities have seized an $8 million jet the group allegedly used and moved it to a hangar in Florida, according to flight records.

The plane traveled from Mexico to Texas to Gary on several occasions, and authorities said they had it under surveillance. Aviation website FlightAware has publicly-snapped photos of the jet at several airports in the U.S. and Mexico.

The special agent in charge of DEA in Chicago declined to discuss the Gary case, but said cartel supply lines are unaffected by global shipping problems.

“Cartels use every means possible to get drugs from Mexico into the United States and then into the local markets. And in Chicago that means predominantly to the gangs that control the drug markets in Chicago,” said Robert Bell, Special Agent in Charge of DEA Chicago. “In the first quarter of fiscal year 2021 we seized more methamphetamine than the entire fiscal year 2020.”

More illicit drugs were intercepted but also consumed, with bootleg concoctions of the potent pain killer Fentanyl now causing 75 percent of all overdose deaths in the Chicago area. The most recent data, from April 2020 to April 2021, shows record setting numbers of overdose deaths in Cook County and across the state of Illinois. For the first time, 100,000 Americans died of drug overdoses in one year, a 30 percent spike.

“There’s very minimal quality control when fentanyl is manufactured on an industrial scale by the cartels in Mexico,” said Bell.

The leaders of those two Mexican cartels are currently Chicago’s most wanted fugitives. For the head of DEA Chicago, one truth remains constant in the cartel world.

“There’s no such thing as nonviolent drug trafficking,” said Bell.

You won’t hear the phrase “War on Drugs” come from DEA’s Robert Bell.

Wars, he explained, have endings. Trying to stop the flow of drugs, he said, is never really over.

Governors urge caution in the United States on the Omicron variant.

Evaluation: The Supreme Courtroom’s conservatives might have the votes to increase...

Autoworkers at John Deere will remain on strike after voting down...